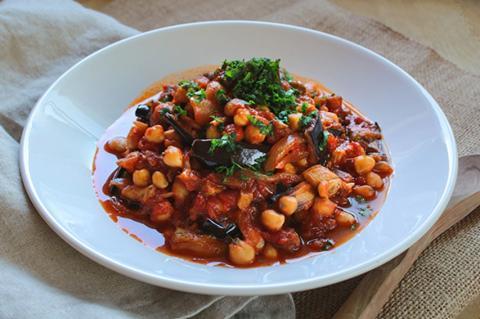 With the fall equinox just around the corner you might be starting to think about parties and pumpkin pie, but instead of jumping into the holiday season, why not ease into it? As we transition into the fall season, today’s vegan eggplant and chickpea stew is a nice dish to add to your table. This healthy stew, with its array of spices, is light, and just a little warming.

When you notice a new crispness in the air, it’s a good time to begin the process of shifting your diet from lighter, easy to digest summer foods to more grounding, fortifying fall/winter foods. The idea is to transition from a high-carb, summer diet to a higher-protein, fat-rich, winter diet. As the seasons change around you, similar changes are occurring in your body as well. The intense heat that has accumulated over the summer is dissipating now, and the land, and your body, is cooling and becoming drier.

To support your body in early fall, introduce generous amounts of seasonal fruit like apples, which cleanse the body and break down heat, and progress into winter with hearty soups, nuts, grains, and—if you eat it—meat. As nature shifts from buzzing energy and plants heavy with overripe fruit, to drier, colder, and barren, increased fat and protein will moisturize, insulate, and stabilize your body.

Your body will love eggplant and chickpea stew during the fall transition because it’s a dish with a hand in each season. In September, eggplant is abundant in many gardens in the northern hemisphere. In Ayurveda it’s considered a cooling summer food. In this recipe, we’re warming it up by adding tomatoes, garlic, onions, and spices like pepper, cinnamon, nutmeg, and cloves.  What you end up with is a delicious, nutrient-rich stew that’s still light and easy to digest. If you’d like to make it a more substantial meal, serve it with a hearty salad, bread, or even boiled eggs.

Most of us agree that what we eat greatly influences how we feel. It makes perfect sense; after all, food has chemical properties. Yet, well before humans discovered quantifiable vitamins and minerals in food, many cultures had developed what would become time-tested philosophies about eating through observation. While it can be interesting to learn about a food’s nutritional composite, it’s unnecessary to health. Instead, take time to notice what’s happening in nature and how it’s affecting you. And when you eat something, notice how you feel. Until we discover a way of eating that works for everyone, the old system of observation might be the best way to go for each of us. In this world of ever-changing diets, it’s comforting to know that some things never change.