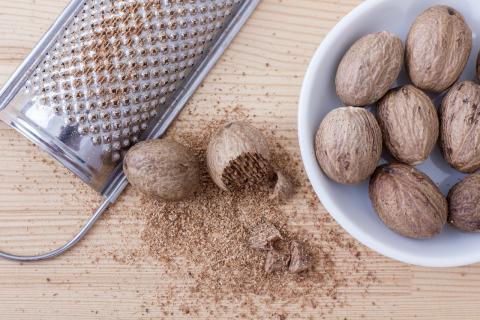 Nutmeg is native to Indonesia on the Spice Islands and grows on an evergreen tree known as Myristica fragrans. Its name is derived from the Latin word “mix,” meaning nut, and “muscat,” meaning musky. Nutmeg was exploited by a few traders who knew where the archipelago was located and they monopolized the market. The western world first discovered it in 1512 when the Spaniards found the islands and later the Portuguese and the Dutch, leading to the bloody Spice Wars. Between the 15th and 17th centuries the English, Spanish, Portuguese, and Dutch battled for control of the spice trade. The Portuguese sailed to the east by way of the Cape of Good Hope. The Spanish sent Ferdinand Magellan west where he found a narrow passage around South America which came to be known as the Straights of Magellan. He died in the Philippines and lost four of his five ships but his crew brought back spices, making the voyage a financial success. The Dutch set up trade from the East Indies, taking control of the spice markets by the beginning of the 17th century. They destroyed seed trees and soaked nutmeg in milk of lime to prevent the seeds from being purchased by rival traders. The French were instrumental in breaking up the Dutch control of the market by planting nutmeg and other spices in French-controlled islands in the Indian Ocean. Nutmeg was valued for its culinary flavor and medicinal properties.

Myristica fragrans trees grow from fifty to sixty feet high and produce a seed about the size of an apricot that contains two highly valued spices. The nutmeg is a hard, oval-shaped seed covered by a tightly wrapped lacy, crimson red spice known as mace; both spices have a warm, sweet flavor. After the fruit is harvested, the husk is removed and discarded and the mace is pealed from the nutmeg seed; then the nutmeg is dried in the sun or commercially in hot dryers until the nutmeg rattles inside the shell. The shell is opened and the nutmeg kernel is removed and dipped in lime water to prevent germination and protect it from insects. It is either kept whole or ground into powder and is used in many recipes and for medicinal purposes. It should be kept in a sealed air-tight container in a cold, dark cabinet where it can stay for several months.

Below are some of the many benefits and interesting facts about nutmeg:

1. Nutmeg has antibacterial properties and is used for oral hygiene by killing bacteria in the mouth. It also contains a compound known as eugenol which benefits heart health. Myristicin is another compound that inhibits the production of a brain enzyme that contributes to the development of Alzheimer’s disease and is used to improve memory.

2. In small doses, nutmeg can improve appetite and aid digestion, thus reducing the incidence of flatulence. It can control asthma and relax muscles, control depression, and treat anxiety. Chinese medicine uses it to reduce the risk of liver disease.

3. Nutmeg oil is known to relieve the pain caused by rheumatism, combat bad breath, and treat toothaches. A few drops of nutmeg oil mixed with honey eases nausea, chronic diarrhea, indigestion, and gastroenteritis.  It is an ingredient in toothpastes, cough syrups, cosmetics, and perfumes.

4. When purchasing whole nutmeg choose the larger seed; when a pin is inserted and oil oozes, it is a fresh nutmeg. Ground nutmeg is more commonly purchased and it is important that the container is sealed tightly and it is advised to check the expiration date. Nutmeg has a tendency to lose flavor over time so it should be bought in small quantities for optimum flavor.

5. Nutmeg is rich in nutrients that includes dietary fiber, vitamin B6 and folate. It also contains minerals of copper, magnesium, and the natural compound macelignan. The fiber benefits the health of the digestive system; magnesium calms, relaxes, and reduces nerve tension which makes nutmeg an excellent treatment for insomnia.

Nutmeg is the fruit of the Myristica fragrans tree native to Indonesia. Its location wasn’t discovered until the 15th century which sparked a series of wars known as the Spice Wars, fought by traders who wanted control the market. Nutmeg is a valuable spice that flavors many recipes and is a beneficial healing aid. It can be purchased as a fresh seed or ground in powder form. Today it is a staple in most spice racks.