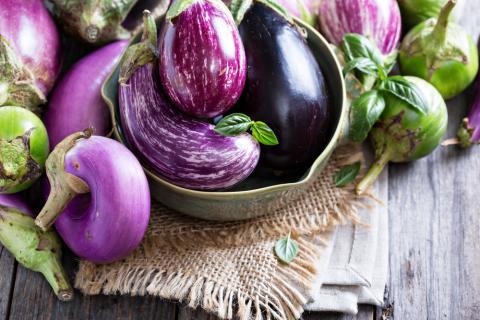 Eggplant is a member of the family Solanaceae, commonly known as the Potato family of the genus Solanum L. or nightshade P, in the species Solanum melongena L. called eggplant P. The plant is believed to be native to India and there is Chinese documentation dating back to the 5th century recording agricultural technics in cultivating it. Eggplant soon gained popularity throughout Asia and arrived in Europe in the 13th century. The plant was brought to North America in the 16th century by the Portuguese and Spaniards. Eggplant was originally named aubergine which was applied to the white-skinned variety of the plant that was shaped like an egg and continues to be a popular nomenclature in many countries. Americans began cultivating the purple variety and used the English term eggplant. This popular plant is grown throughout the world and known by regional names like “garden eggs” in west Africa and “gully bean,” “susumber,” and “pea aubergine” in the West Indies.

Eggplants are grown in several varieties, each having slightly different characteristics but all have a pleasant bitter flavor and a spongy texture, and they grow on vines much like tomatoes. The North American variety resembles a cross between a pear and an egg in shape with glossy, deep purple skin, and cream-colored flesh. The seeds are embedded in the flesh in a conical pattern. There are many varieties of eggplant that grow in shapes that range from the size and shape of a small tomato to the size of a large zucchini. They are also cultivated in a rainbow of colors that include lavender, orange, jade green, and cream.

Eggplant is rich in nutrients that include vitamins, minerals, and other healthful substances. Present are fiber and folate, minerals that include copper and manganese, and vitamins B1, B3, B6, and K. They are rich in phytonutrients like phenolic compounds such as caffeic and chlorogenic acid, as well as flavonoids like nasunin. They also contain phenolic antioxidant compounds and a list of approximately eighty healthful nutrients.

Because of its high content of phenolic antioxidant compounds, especially chlorogenic, eggplant has one of the most potent inhibitor of free radicals, resulting in reduced incidents of cancer. It also removes the bad cholesterol in the body, reducing the risk of developing cardiovascular diseases, and prevents joint damage (a major cause of rheumatoid arthritis).

The fiber content of eggplant aids in the digestive process by slowing down the rate of digestion, allowing the body to absorb sugars at a steady rate. This results in the reduction of the development of diabetes. It is an excellent food for weight loss because of the fiber and low calorie content in the vegetable.

How to Eat Eggplant

Eggplant is a versatile vegetable and can be used in salads, side dishes, and as a main course in recipes. Throughout the years they have been prepared in many variations. Recipes from 1824 include fried breaded eggplant and eggplant stuffed with meat and covered with gravy. They also broiled eggplant stuffed with meat in 1863 and in 1929 eggplant steak was created. Eggplant parmesan became a popular dish after World War II. Today there are a multitude of recipes with eggplant as a key ingredient.

How to Grow Eggplant

Growing eggplant is relatively easy. They are a warm climate perennial and do well as container plants and grown in raised beds. It is advised to start plants in peat pots or flats approximately two months before the last freeze in colder climates. Plant outdoors in well-draining fertilized soil twenty-four to thirty inches apart. After planting, water well and cover with mulch to hold the moisture and control weeds. Stake or cage the plants for support as the fruit is heavy on the vine. Fertilize the plants every two weeks and harvest ripe eggplant to be sure no more than five or six mature on a single plant for best results.