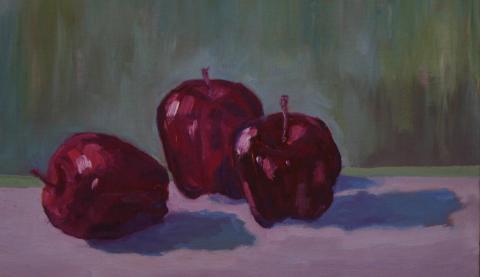 Apples are a member of the family Rosaceae, the Rose family in the genus Malus Mill. or apple P. This genus contains thirty-six species. There are about 10,000 varieties of apples throughout the world, of which 7,000 can be found in the United States. The origin of the apple has been determined to be in the Caucasus Mountain area, and archeologists have found prehistoric remains of fossilized crab apples in Swiss dwellings. Scientists have also found carbonized apples that date back to about 6500 B.C.E. at Catal Huyuk in Anatolia. From these wild crabapples the modern, large, sweet apples have been cultivated. While crabapples are also native to North America, the English brought their cultivated plants when they colonized the continent. By 1622 the English began importing honeybees to pollinate their apple orchards. In the early 19th century John Chapman became the American folk hero Johnny Appleseed. Born in Leominster, Massachusetts, he wanted to produce so many apples that no one would go hungry. He is often depicted as wearing his cookpot for a hat but he only put it on his head when his hands were filled. Scantily clothed, he wandered through the frontier of Illinois, Ohio, and Iowa planting apple seeds and giving pouches of apple seeds to farmers. He established apple orchards and developed nurseries throughout his life and it is estimated that he traveled approximately 10,000 square miles.

As a member of the rose family the apple blossom has parts in multiples of five with flowers that can be white or pink. The plant produces pome fruit that is fleshy with a central core containing five seeds enclosed in a star-shaped capsule. Of the many varieties the most popular in the United States are the Delicious varieties (both Red and Golden); the Red is primarily an eating apple while the Golden does well as a sweet addition to many recipes when cooked or baked and is used in many fresh salads. The Fuji has a spicy sweetness with firm flesh and grows in color from very red to yellow-green with red highlights; it is often used to make applesauce. The Gala is heart shaped with yellow-orange skin striped with red and is an all-purpose fruit; the Braeburn is an aromatic apple that blends sweet with tart and makes a good snack or an addition to fresh salads. Granny Smith is a crisp tart apple with green skin and is used primarily for cooking and baking, and the Winesap has a wine-like flavor, making it an excellent apple for cider recipes.

There are many health benefits for apples in our diets:

1. Apples are packed with nutrition and can be classified as a superfood. It contains vitamins like C, K, and B6, and riboflavin. There is an abundance of phytonutrients and flavonoids like quercetin, epicatechin, phloridzin, and more. Also found in apples are minerals that include potassium, copper, manganese, and magnesium. It is a high fiber food and a single serving provides twelve percent of daily recommended fiber.

2. As a cancer preventative, apples play a key role in controlling the risk of cancers like lung, breast, and colon. They slows the growth of existing cancers and control its development. One reason that apples are so effective in cancer prevention is that they have a high content of quercetin and kaempferol.

3. For heart health, apples lower cholesterol levels in the body. They contain a significant amount of antioxidants that reduce the oxidation of fats and neutralizes triglycerides. The quercetin that is found in the skin of the fruit reduces inflammation in the blood vessels.

4. Apples are an excellent addition to the diets of those suffering from diabetes because the nutrients in apples regulate blood sugar. The polyphenols present in the fruit lower glucose absorption which balances blood sugar levels. Apples stimulate insulin receptors in cells throughout the body, helping them to metabolize the blood sugars and resulting in proper organ function.

5. There has been a positive impact that apples have on the prevention of Alzheimer’s and Parkinson’s diseases. Their high content of phytonutrient compounds reduces free radicals that have been linked to Alzheimer’s disease. They also prevent the gradual deterioration of dopamine-producing nerve cells, which is found to be a cause of Parkinson’s disease.

The apples we know today originated from the crabapple. There are many varieties of the fruit that are used for snacking, baking, and added to recipes. Apples are a high nutrient fruit that has many benefits to keep the body healthy. The porous pulp makes the fruit float in water which has made it a fun game for holiday entertainment. Apples store well, keep the body healthy, and taste really good.