How To Cook & Enjoy Lentils 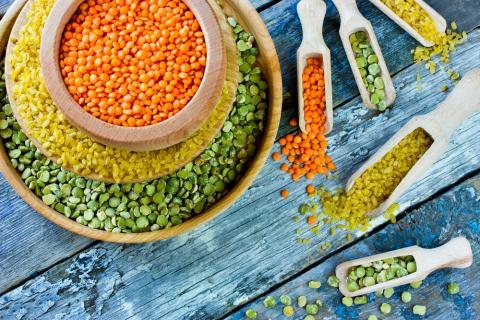 Lentils might not look like much, but they certainly pack a punch. You’ve probably enjoyed them in lentil soup, where they stand out as the featured ingredient.

Lentils are a part of the pulse family, better known as legumes or beans. Older than any other member of the pulse family, lentils have been a staple in regions around the world, but are primarily a part of Indian, Asian, and Mediterranean cuisine. While you might be familiar with brown or red lentils, there are more than a dozen types. These include:

What’s the nutrition profile of lentils?

Although amounts will differ depending on the variety of lentils being used, lentils are typically high in protein, iron, fiber, and complex carbohydrates—making them a particularly great choice for vegans and vegetarians or for anyone looking to boost their iron intake. The USDA’s National Nutrient Database lists raw lentils as containing (per cup) 47 grams of protein, 121 grams of carbohydrates, and 67 mg of calcium, 12 grams of iron, and 1300 grams of potassium. One cup of lentils is equal to approximately 676 calories, but keep in mind that a serving is much closer to half of that.

Where can I buy lentils?

For convenience, lentils can be purchased at most grocery stores by the can. Unfortunately, you’re limiting your options if you only purchase canned lentils. Health food stores often carry dried lentils and varieties include brown, red, and occasionally beluga lentils, too. Cook times will differ depending on the variety, but you can safely figure that brown, red, and green lentils take roughly 20-30 minutes to cook while smaller, thick-skinned lentils like French Puy or Beluga take closer to 40 minutes. To prepare, simply rinse, drain, and boil.

What can I do with lentils?

Due to varying skins, some lentils are better suited for soups and stews while others work well added to salads and vegetables.

These orangey-red pulses are often used in Indian cuisine, and thus are common to dals and curries, and are often paired with ingredients like onions, cumin, and curry.

Brown lentils are typically brown, green, or grey in color and hold their shape better than red lentils, depending on how long they are cooked. While they can be added to stews and soups and used in dal recipes, I prefer using brown or green lentils in heartier salads. One of my favorite lunches from a local grocer includes green lentils, carrots, celery, sun-dried tomatoes, and raw goat cheese, but this is just a base recipe; feel free to swap out your favorite vegetables—add a light marinade, a sprinkle of cheese, or a few nuts and you have a nutrient-packed meal.

Try Lentil Tacos or Lentils with Roasted Beets and Tomato

Beluga lentils are aptly named: take a look at their small, black, plump appearance and you might think you’re looking at caviar (hence the name.) Beluga lentils are ideal for salads and main entrees thanks to their hardy shape. Most recipes feature them paired with yogurt as a bright contrast to their earthiness, but they also work alongside fish or as the feature in a vegan entree.

Try featuring them in a Buddha Bowl or serve them alongside steamed Artichokes.