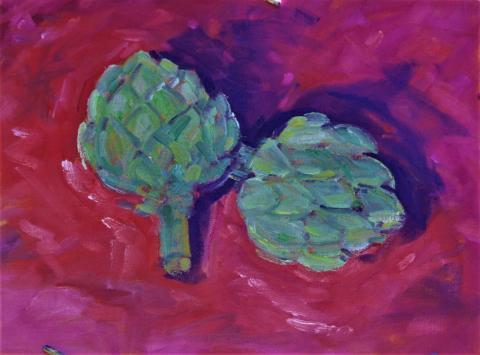 The artichoke has origins in the Mediterranean basin. It is a member of the thistle family and evolved from the cardoon plant. It is the bud part of the plant before it flowers, which is edible. It is composed of triangular scales around the central choke known as the heart and only the lower half or fleshy part of each scale can be eaten, but the heart is the most delectable part of the artichoke. The immature bud can be eaten in its entirety. Since the days of the Greeks and Romans, this plant was also used for medicinal purposes because of its high fiber content and antioxidant properties. Artichokes were first recorded between 40 and 70 C.E. in “The Greek Herbal of Dioscorides,” a book of medicinal plants that considered it an aphrodisiac; therefore, in many countries, women were forbidden to eat it until the 16th century. In that era the plant made its way to the rest of the European continent and was brought to England by the Dutch. French and Spanish immigrants brought the artichoke with them to America in the 19th century, while the Italians made them popular in the United States. Today artichokes are grown primarily in California and Florida.

There are several types of artichokes but the most popular and readily available are the globe artichokes. They are harvested just before the bud opens when the petals are still tightly packed. Artichokes are not only a fun food to eat but they are packed with nutrients, making the artichoke a superfood. It has a high fiber content, and it’s rich in antioxidants, vitamin C and folic acid; it also contains B complex vitamins and vitamin K. Artichokes are packed with minerals that include copper, potassium, calcium, iron, manganese and phosphorus, giving them healing qualities that reduce the incidents of many diseases and help to keep the body healthy.

1. Artichokes are an excellent tool to fight cancer because of their high content of antioxidants and phytonutrients like quercetin, rutin, gallic acid and cynarin. These elements effectively absorb and eliminate the free radicals that cause cell mutation resulting in malignant tumors.

2. Artichokes are a factor in the control of cardiovascular disease because they contain cynarin which is an element that balances the cholesterol levels in the body. The bud also is a factor in the reduction of inflammation that relaxes the circulatory system and improves blood flow. It not only reduces the risk of coronary diseases but is helpful in reducing the incidents of metabolic disorders.

3. Artichokes support healthy liver function because of their high cynarin content that stimulates the production of bile. Bile is essential in the breaking down of fatty acids for proper absorption. Artichokes also contain silymarin, a potent antioxidant flavonoid that contributes to a healthy liver.

5. The high fiber content in artichokes is a factor in the control of diabetes. Fiber is a control that balances blood sugar levels which eliminates the spikes and dips in the flow of insulin. It allows for the glucose to be slowly absorbed into the blood stream because it is a substance that does not require insulin for digestion.

Other health benefits include the promotion of healthy skin, strengthening of the skeletal system, increasing iron levels, which prevents anemia and controlling weight.

When purchasing artichokes look for tightly closed petals with a fresh green color. To be sure the bud is fresh, press the petals together; they should make a squeaky sound. Artichokes can be prepared by boiling, baking, or steaming them which is considered the best because it does not leach out their nutritious qualities. To use the baking method, remove the spike tips and strip the bud of its petals, and then cover with olive oil and seasoning and bake for forty-five minutes to an hour; to use the boiling method place the bud in boiling water and simmer for thirty minutes.

Artichokes are not only a fun food; they are a great addition to a healthy diet.