5 Ways To Move From The 5K To Beyond 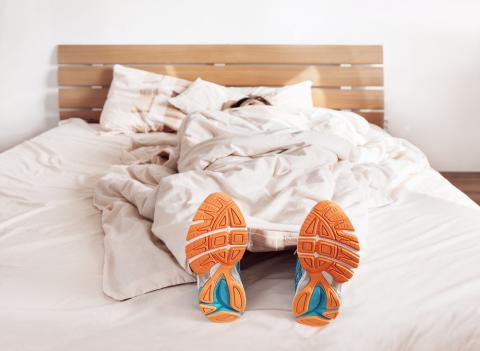 Learning any skill requires time and patience, and running is no different. Tired of running 5Ks every weekend and looking to move into the 10K, half-marathon, marathon–or even ultramarathon–distance? Here are five steps to making the jump.

The first time I ran 800-meters during a track meet in elementary school, I thought it was impossibly far. Several years later, at the end of high school, I ran a 10K race and believed I deserved a week of rest for the mileage I had covered. Now, in my mid-twenties, I run 100-mile races two to three times each year and am inspired by those who cover the 200-mile distance. Moving up in distances takes time. There was no way I could have gone from running a 10K with friends to running 100 miles through mountainous terrain in a month, let alone a year. Did you begin running 5K races within the last six months? Do you typically run less than twenty miles per week? To ensure that you allow your body the proper build-up time, many experts agree that a 10% increase each week is your best bet to maintaining an injury-free body. For a better estimate, ultrarunner and Coach David Roche suggests that athletes attempt to maximize their volume without running their body into the ground–literally. Roche himself took two years to increase his mileage from the 20-30 miles per week he was running as a part-time runner to the 90-100 per week he maintains as a professional distance runner.

Remember, there’s no rush. Ultimately the miles you put in should be memories that make you smile to look back on. The less injuries you get along the way, the better.

When training for an upcoming race, or especially when making the transition from a 5K to a half-marathon, or a half-marathon to an ultramarathon, you’re likely going to need to do more than “just run.” While a quick pace and breathlessness might sound like the way to run every time you tie up your shoes and head out the door, varying your speed, intensity, and a host of other metrics ensures that you build speed, endurance, and even stability, in the case of some coaches who like to include core work. Don’t know what a tempo or fartlek run is or why it might be beneficial to your training? A coach who assigns you a weekly, bi-monthly, or monthly schedule can be especially helpful for those who lack motivation or are unsure of what to do from day to day. Many coaches sell plans online, but for added help, look for a coach that’s local to your area.

This might seem strikingly similar to the first point (Take Your Time), but going slow is a different aspect of running well that needs to be taken into consideration. Author and running coach Matt Fitzgerald recommends running 80 percent of your runs at a lower intensity and only twenty percent of your runs at a high intensity. In his book, 80/20 Running, he suggests that running should actually feel easy and enjoyable–at least most of the time. “You see, in order to yield steady improvement, a training system must be repeatable–day after day, week after week, month after month.” Fitzgerald states that tracking your slow runs by monitoring your heart rate, perceived effort, and pace is the best way to ensure you’re moving easy enough. If you’re interested in using heart rate to track what pace you should actually be going on your daily runs (what should probably be your easy, neighborhood loops), heart rate monitors can be purchased that easily sync to your watch. For more information, look at the work of Dr. Phil Maffetone here.

There’s two ways to take this point. The first is that it’s important to realize that running is only running–which is to say that for those who tend to get obsessive about goals or hobbies, don’t let one bad run or race make or break your life outlook. However, the second and more critical point is that even when you finish your run, stop your watch and untie the laces of your running shoes, your “running” isn’t over. That’s because your body doesn’t stop when you finish a run. In Dr. Kelly Starret’s popular Ready to Run book, the coach and psychotherapist takes readers into the daily routine in the life of a typical runner: you wake up with lingering pain, brush it off, go for your run anyway, then sit down for the rest of the day at work. Unfortunately this type of on/off action isn’t what human bodies are designed to do. Instead, Starrett imagines a different type of runner, one who, as he states, “will gain confidence that you’re optimizing power and minimizing injury risk.” Ready to Run lists numerous exercises and mobilization plans to follow, but trying yoga, tai chi, or getting a better take on your nutrition and hydration all help your body recover from and prepare for runs and races. Take some time to develop a plan that will build your body back up, rather than break it down by rewarding it with processed foods, high-sugar sodas, and Netflix after your race.

The quote “The journey is the destination” is an apt way to describe the process of moving up from one distance to another. Setting goals, whether based on distance or time, is often a great motivator, especially for early morning runs that require you to leave the warmth of your bed at 4 or 5 in the morning. However, the fun you have during your runs or races will often be dictated more by the people you’re running with, the places you’re running, or why you’re running at all than specific time goals or placements. To get the most out of the time you spend running, try to smile at everyone you pass on a run, or mentally list out reasons why you’re grateful for the ability to move your body. Finding a weekly group run can be a great way to make friends who share running and potentially similar goals. Often the best advice can come from friends who have been in your position. For extra motivation, sign up for your next race with a friend. No matter your result, you’ll have shared a few fun miles and made a truly long-lasting memory.