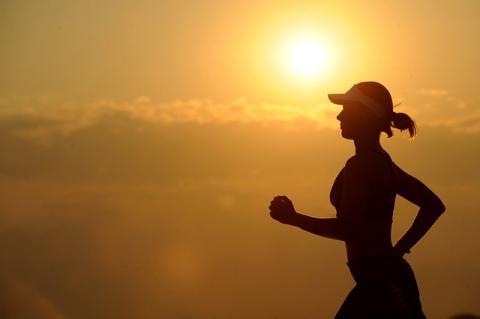 Why did you start running? If I ask ten people this same question, I’ll receive ten different responses. Some are obvious: to lose weight, to gain cardiovascular benefits, to make friends. Others, however, are less so: to reconnect with my body, to destress, to teach myself dedication. Running has myriad physical benefits, but the psychological benefits are just as numerous. Here are five reasons why running is good for you–mentally.

1. It Changes Your Perspective

If you’ve read any of Japanese writer Haruki Murakami’s fiction, you’re probably aware that he’s written a non-fiction piece about running. Aptly titled, What I Talk About When I Talk About Running, Murakami’s book explores the writer’s personal reasons for beginning every day with a run. Murakami has used running as a way to begin his life as a novelist. In a New York Times article written by Murakami and translated by Philip Gabriel, Murakami stated this about lacking motivation: “Whenever I feel like I don’t want to run, I always ask myself the same thing: You’re able to make a living as a novelist, working at home, setting your own hours. You don’t have to commute on a packed train or sit through boring meetings. Don’t you realize how fortunate you are?” In this way Murakami uses running as a way to change his perspective about his own work.

In the running classic The Lore of Running, Dr. Tim Noakes discusses running and its relation to his own health. “Ultimately,” he states, “the jogger/racer may evolve into a runner who is unconcerned about the heart aspects of running and whose psyche no longer needs the challenge of the race. The runner runs to meditate, to create, and to become whole.” He cites George Sheehan, a well-known scientist who first suggested that “running is finally seeing everything in perspective.” For those who run, this concept resonates well.

2. It Gets You High (Naturally)

Not every run gives you a runner’s high, and not everyone experiences a runner’s high, but most people are aware that it does happen. But why does it happen, and how? To start, a runner’s high is the feeling that one gets when endorphin levels are increased due to exercise. A study explained in Chemistry & Engineering News in October 2015 looked at how anxiety levels of mice were affected by exercise. The mice who ran for five hours had far less anxious behavior, where the control group, the sedentary mice, were stressed. While scientists are not yet decided on how exactly a runner’s high occurs, studies are conclusive that they do occur. Go for a run after a stressful day at work and see what happens–it might just change your whole mood.

3. It Keeps You Sharper (In More Ways Than One)

Most people relate running to good health, but think in terms of physical outcomes: perhaps your jeans fit better, you move better, and you can climb a set of stairs without feeling out of breath. But running can help your brain stay sharp and nimble, too. A groundbreaking study found evidence that those who perform physical activity–like running, which is accessible to most people–have improved brain function and a delayed onset for dementia or diseases like Alzheimer’s. Other studies, like this one, show improvement in memory after exercise training.

4. It Gives You Confidence

Do you remember the time you trained for weeks leading up to your marathon, started your marathon apprehensively, felt the pain in your legs from building lactic acid, felt your body screaming at you to slow down, but you pushed through anyway and finished? If you’ve run a race–or even the mile in high school–you likely know what I’m talking about. Running brings with itself a kind of self-efficacy. As Matt Fitzgerald, coach and sports nutritionist states, “Elite runners often speak of drawing confidence during races from thinking about all of the hard training days they’ve done leading up to the race, and the fine workout performances they’ve achieved.” But this same idea works outside of running, too. Thinking about doing taxes? Or having to pack up all of your belongings and move across the country? Perhaps you’re looking at four years of college and nervous about the work it entails. Whatever the challenge, running often has a way of putting your obstacles in perspective. Knowing you finished a tough workout or brutal race can give you the confidence to succeed in other areas of your life, too.

5. It Builds (Your) Community

Running is a lonely sport. There are no teams or teammates, no mascots nor uniforms. But what running lacks in numbers it makes up for in community. Think about the energy you feel at the start of a 5K–you can almost feel the energy and excitement before the race as hundreds, sometimes thousands, of runners get ready to do their best. New to a city? The best way to get to know both your city and its inhabitants is often by joining a local running group for a run post-work. Running builds a type of community and closeness that other sports and activities don’t often share. During a run or race, we are often at our worst–sweaty, fatigued, sometimes even bonking during an energy low at a marathon. And yet we are also at our best because our barriers are no longer up against others. This study demonstrated a conclusion between exercise and its anti-depressant effects. The next time you’re feeling lonely or down, call the new friend that you just met at your local running meet-up and ask them to join you on a run. You won’t regret it.