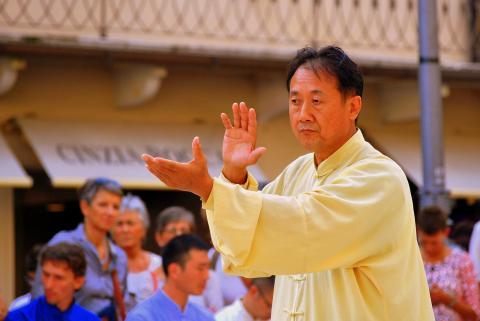 Many of us work with computers or other types of equipment that keep us sitting or in another single body position for much of the day. If this is the case in your life, you are likely well aware of the physical discomfort this can cause due to sore and tight muscles. Unfortunately, sitting all day has also been found to increase one’s risk for chronic health problems. One solution to being overly-stationary is to learn tai chi and incorporate it into your routine. Tai chi can be practiced standing or while seated and has a variety of benefits.

Tai chi, which is an abbreviation for tàijíquán or t‘ai chi ch‘üan, is a movement practice that is known as an internal martial art. This type of martial art is characterized by slower and more comfortable movements and a focus on the body’s chi or qi: life energy force. The term taiji refers to the forces of yin and yang, the complementary forces in the universe of dark and light, passive and active. Taiji World explains that within tai chi, yin yang “refers to the constant changing of state in the body and the Qi.” An example of yin and yang manifesting in tai chi would be that a relaxed hand is known as a yin hand, whereas a flexed hand is called a yang hand. As in many styles of martial art, tai chi moves are often poetically named for animal actions, such as "white crane spreads its wings.”

Tai chi steps or actions balance yin and yang movements, embrace unity within opposites, and can help the practitioner to achieve heightened body presence and physical balance. Tai chi students learn a series of movements which all originated in the Chen Village in the Henan province of China. Dating back to the late 16th century, tai chi evolved into various schools of practice which have spread into communities worldwide.

Tai chi students practice slow, flowing movements, gentle stretches, and conscious breathing. This gentle and focused activity that increases body awareness can help reduce stress and anxiety, according to the Mayo Clinic. And as Harvard Health explains, “Tai chi is often described as ‘meditation in motion,’ but it might well be called ‘medication in motion,’” because it can improve balance, strength and flexibility. Tai chi can be used by almost anyone, including those seeking a gentle and preventative or rehabilitative exercise routine that will generally not stretch or strain tissues and joints.

The upper body movements of tai chi can be practiced sitting, which is a great option for people with limited mobility or who spend much of their day seated at work. In 2014, researchers from Hong Kong found that practicing tai chi can help older adults improve balance control and eye-hand coordination. The adults underwent three months of tai chi practice at a frequency of three hours per week. They then underwent various coordination and balance tests. The participants showed improvements in their sitting balance and finger-pointing accuracy.

While standing up to stretch and walk are important to one’s well-being at a sedentary job, it is possible to also get some gentle exercise while you are seated. Tai chi is a great option for this. Those with very active jobs may find tai chi useful as well. Some firefighters in the UK are practicing tai chi as part of a wellness program, “to focus on posture, breathing and deep relaxation.” “It was the best part of my day – Mike Scott knows magic!” one participant says of the course and instructor. CNN reports that many young adults and millennials are also turning to this ancient practice as a means of self-care. “We all need a practice, whether it’s tai chi or something else that helps us to slow down,” says Daniel Hoover, an instructor in Long Beach.

If you are interested in trying this gentle martial arts practice, you may be able to find a local tai chi class near you, and there are many instructional videos online as well, both for standing and seated routines.