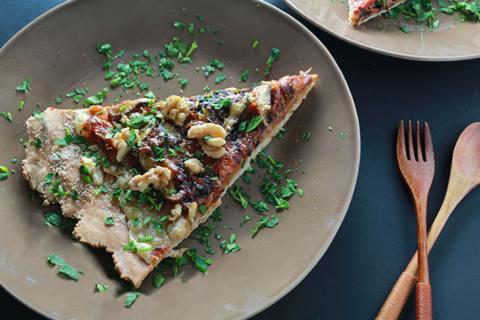 Can I convince you that there’s a best time for pizza, and that it happens to be right now? When it’s cold, we naturally crave heavier foods that provide fat and protein which our bodies transform into insulation. And while many people feel the need to resist food cravings, I’d say that listening to your body, giving it the best version of what it’s asking for, and enjoying every bite is a great approach to health. Another good reason to make a pizza with a homemade crust is that wheat, and spelt (a subspecies), are traditionally harvested in fall for winter eating; and let’s not forget about the link between seasonal eating and a healthy microbiome. With all this in mind, let’s get to today’s Meatless Monday recipe: mushroom pizza with fontina, radicchio, and walnuts on a spelt crust.

What Is Meatless Monday?

Today’s mushroom pizza is the second recipe in our ongoing seasonal Meatless Monday series. I’ve written about Meatless Monday in a previous post, but in a nutshell: Meatless Monday is a non-dogmatic, non-political global movement that encourages people to eat more plants for their health and the planet’s.

How To Make Mushroom Pizza

One of the things I love about cooking is that it’s so easy to dive in, and homemade pizza is no exception. It’s hard to make an inedible pizza. That said, you’ll get better results with practice, which is all the more reason to get cooking. This mushroom pizza includes a spelt crust borrowed from the wonderful Sarah Britton. Spelt flour has a complex, nutty flavor and a light texture. It’s also more nutritious and easier to tolerate than hybridized wheat flour. However, if you don’t have spelt flour you can use pretty much any crust. Dive in, keep it easy, and you’ll have a delicious, healthy meal in no time, and a great cooking experience, too.

If eating heavier food in the winter sounds crazy, consider this: spring and summer are seasons of lighter foods. This means that if we follow a seasonal diet, we eat heavier foods in the fall and winter, and less caloric foods in the spring and summer. Eating in this way, many people find that their bodies—and their cravings—harmonize with the nature’s cycles. Instead of gaining too much weight, they are able to leave weight obsessions behind over time. Choosing harmony over restriction, you just might discover a new love for food, as well as the body you inhabit as part of this amazing earth.

For the pizza topping: