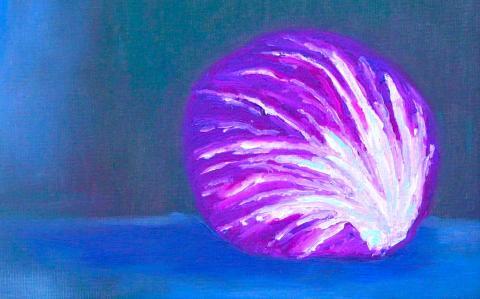 Radicchio is a member of the family Asteraceae, commonly known as the aster family in the genus Cichorium L. and the species Cichorium intybus L. or chicory P. Early humans used the plant as a blood thinner and a treatment for insomnia but did not begin to be cultivated until the 15th century in the region of Veneto, Italy. The varieties of the plant are named for the region in which they originated. The modern version of the plant was developed by Francesco Van den Borre, a Belgian agronomist in the 19th century, using the same growing methods used in the cultivation of endive. It is a blanching technique known as “hilling” that bowls the dirt around the area that the radicchio is planted, resulting in the blocking of sunlight to the plant which inhibits the photosynthesis. It is nutrient-rich, containing vitamins A, C, K, and various B vitamins as well as minerals that include potassium and magnesium and a substantial amount of flavonoids. Its peak season is during the winter months but it is available in supermarkets, grocery stores, and health food stores throughout the year. They are also a nice addition to a garden.

Radicchio is a leafy red or green vegetable with overlapping leaves that are tapered in shape and have a slightly bitter taste. They can be found in three varieties: the radicchio rosso di Treviso IGP has a tapered shape with narrow leaves and was once used as fodder for livestock; Radicchio Variegato di Castelfranco grows leaves with a yellow-green color and is covered with small reddish dots; radicchio verde also has a tapered shape with large green leaves. All three varieties can be used raw in salads or cooked in soups and stews and it is excellent in pasta or rice dishes. Its unique flavor adds a delicious taste to any recipe.

1. Radicchio is rich in nutrients and is an excellent addition to any fall menu. Its mineral content includes potassium, sodium, phosphorus, iron, magnesium, copper, calcium, and manganese. It has a high vitamin value that includes vitamins B1, also known as thiamin; B3, called niacin; B5, referred to as pantothenic acid; B6 or pyridoxine; and B9, the familiar folic acid. Not only is radicchio full of B vitamins, but it is also rich in vitamins C and K. It has a low calorie count and adds fiber to the diet.

2. For ocular health, radicchio strengthens the retina because it has a substantial amount of phenolic flavonoid antioxidants that include zeaxanthin and lutein. Though low in vitamin A, these compounds protect the eye by filtering the harmful ultraviolet rays. It also helps to lessen the risk of developing macular degeneration.

3. Radicchio controls weight gain due to its low calorie count and because it provides a fuller feeling when eaten. It also regulates blood pressure, reducing the systolic pressure in the arteries due to the presence of the phytonutrients lycopene, ellagic acid, and quercetin. The potassium content relaxes blood vessels, reducing the risk of hypertension.

4. Because of its benefits to the circulatory system, radicchio contributes to brain health. The neurological benefit of potassium, folate, and other antioxidants increases the blood flow to the brain. The results have been found to increase neural activity, enhance concentration, and improve cognitive thought.

5. Radicchio is excellent for the digestive system. Its high fiber functions as a colon cleanser. It also removes intestinal worms and parasites. Another benefit of the vegetable is its cancer fighting properties. The antioxidants present in organic radicchio have been shown to be effective in reducing the risk of liver cancer.