Before You Eat That Veggie Burger: The Scoop On Heme In Fake Meat 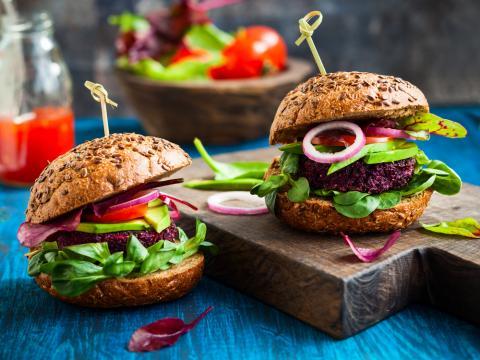 If you’ve tried one of those meat alternative patties that “bleeds” like real meat might, you’re either in love, grossed out, or confused as to why this product is even available.

Heme is now being extracted from plants and used to create fake meat that tastes similar to real meat in order to serve vegans and vegetarians, while also reducing the environmental load that raising animals for food production can have. But does heme come with health benefits, or worse, health risks? Why is there a need for making more meat alternatives? Furthermore, what does it taste like?

Loosely defined, heme is the part of hemoglobin that binds to oxygen. Outside of the science lab, it’s known as the compound that gives red meat its red hue, colors our blood red, and is high in iron.

Where is heme found?

Heme is ubiquitous in meat (specifically in red meat), but it’s actually found in all living organisms, including plants and bacteria.

Unfortunately—or fortunately, depending on your perspective—at least one company has taken heme from legumes and created a burger that looks, and to a certain extent, tastes, like a burger. Agriculture and raising livestock uses a lot of resources: agriculture is responsible for more than 18% of greenhouse gas emissions, while raising cows requires large swaths of land and water. Additionally, monoculture farming and industrial farming is incredibly taxing on our lands and while sustainable, organic farming is a solution, it doesn’t solve everything. To make a dent, we need to reduce our overall meat intake.

While heme might sound like a good idea, it’s worth taking a second look. For one, the “secret” ingredient in these burgers, soy leghemogloblin, has yet to be proven safe. In nature, this compound is found in the roots of soy beans, but the companies genetically engineer the heme in a laboratory—drawing questions about the safety of consuming the burgers. The Food and Drug Administration (FDA) has yet to determine that heme, when genetically engineered, has no side effects and unfortunately, we may not know for years if it does or does not.

What’s the problem with heme?

While reducing our meat consumption may be helpful in reducing our impact on the climate and the world, doing so without fully understanding what we’re eating—especially because it’s not a food that, as humans, we’ve been eating for thousands of years—could actually be detrimental.

Along with the possible side effects that eating laboratory-developed heme may have, creating a fake burger might not be the answer to reducing our burger consumption. This concept is similar to processed vegan food: certain popular mainstream junk foods may be vegan, but do they support local farmers, are they free of plastic packaging, and do they nourish our bodies?

After several years’ worth of studies, laboratory-grown heme may prove to be safe for human consumption; maybe it really will change the world for the better. For now, there are safer, and even tastier, options when looking to avoid meat. Look for tempeh, tofu, and legume- or lentil-based dishes when opting to avoid meat.

What are some heme recipe ideas?

I love coating tofu in a mixture of nutritional yeast and dijon mustard, then baking until crisp, and I regularly marinate tempeh in rice vinegar and aminos, then sauce with seasonal vegetables. The recipes below make great options, too. I promise—you really won’t be missing the “blood” of burgers.

Have you tried a heme-flavored burger? Would you try it? Let us know what you think in the comments below.