Rice: A Food Sustaining Half The World 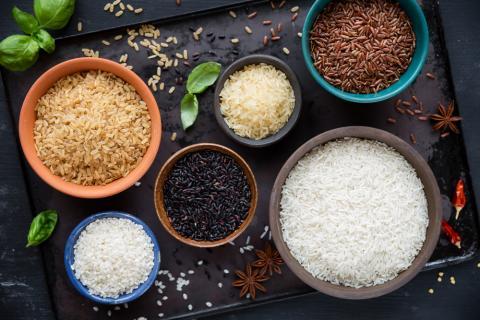 It is estimated that more than half of the world’s population is sustained wholly or partially on rice. The grain has been cultivated in Asia for centuries. In several Asian languages the words for rice and food are the same. There are thousands of varieties of rice, but the original form of the grain is unknown. From Asia, it traveled to India, the Mediterranean basin and Europe, and finally Africa. Rice came to the east coast of America with the slave traders in the middle of the 18th century in the Carolinas and it came to the American West via the railroad workers from Asian countries.

Today rice is grown on every continent in the world (except for Antarctica), with the majority of the crop grown in Asia. There are hundreds of species, the most common being Oryza, a rice that was cultivated more than 14 million years ago and is the basis for all of the tens of thousands of varieties found today.

Rice comes in several forms that include long-, short- and medium-grain. Long-grain rice is four times longer than wide and cooked grains are separate, light, and fluffy. Medium-grain rice is half as long as long-grain rice and is a moist and tender rice that clings together when cooked. Short-grain rice is plump and almost looks like a round kernel, and after cooking it is soft and clumps together.

Rice can be found in many styles like regular milled white rice, which is polished, and the most commonly found. It has the outer husk and layers of bran removed. Parboiled rice has been pressure steamed before milling and is favored by chefs for the extra fluffy consistency. Precooked rice can be either brown or white rice that has been completely cooked and dehydrated after milling which reduces the preparation time.

Of the many kinds of rice, the most common are the types of brown rice. Brown rice is the most nutritional because the bran layer of the grain is not removed. It takes a longer preparation time than other varieties and has a rich, nutty flavor. Basmati rice is long and slender and cultivated mainly in the foothills of the Himalayas. It is called the “Prince of Rice” and has a fragrant flavor and aroma and is used in many Indian dishes. Brown basmati rice is higher in fiber content than the white variety. Jasmine rice is less aromatic than basmati and is grown in Thailand. It is a long-grain species with a soft and slightly sticky texture and is served with Chinese and Southeast Asian foods.  There's also red rice, black rice, and wild rice, which is technically a different species.

Rice is a world favorite grain and can be used in a multitude of dishes.  Looking for a recipe?  Try these:

Photo Credit: "Bowl of Rice" by Saikat Biswas is licensed under CC BY 2.0