The Best Way To Cook Rice To Reduce Arsenic 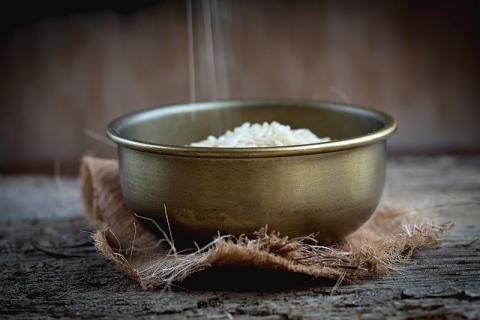 Hear the word arsenic, and immediately poison comes to mind. From cancer to heart disease, arsenic has been linked to a multitude of health problems. High levels can be fatal, but the reality is this silver-gray or white element that naturally occurs in nature can be found in our food. Plants we consume may take up small amounts from soil and water. While trace amounts can be found in grains, fruits, and vegetables, rice is particularly susceptible. Yes, the rice you're eating does contain arsenic. So is there a way to enjoy rice and not consume the unhealthy chemical?

The answer is in the cooking. According to the Independent, biology professor Andy Meharg at Queens University Belfast tested three different methods of cooking rice. The goal was to find the best possible way in which to cook the grain, while reducing consumption of arsenic.

The first method was the most commonly used way of cooking rice. A two-to-one-part rice ratio was used that involved steaming out the water while cooking. The second method used more water, a five-to-one-part rice ratio. What he found was that the arsenic in the second method was half the amount it was in the first. The third method he found, however, was the most beneficial.

Like cooking garbanzo and black beans, the rice was left to soak overnight in the third method. Then, before cooking, he rinsed the rice until the water went from a milky color to clear. Draining all the liquid, the rice was then cooked like method two – five parts water to one part rice. The results were astounding. The arsenic had reduced by 80 percent! That is quite the difference from the first method.

When cooking rice, it's worth it to take the extra step of soaking it in order to reduce potential arsenic content. Of course, you could choose not to eat rice at all, but unfortunately our soil, air, and water contain organic and inorganic arsenic so you can't avoid it entirely.