Posture, Lifespan & The Truth About Calcium 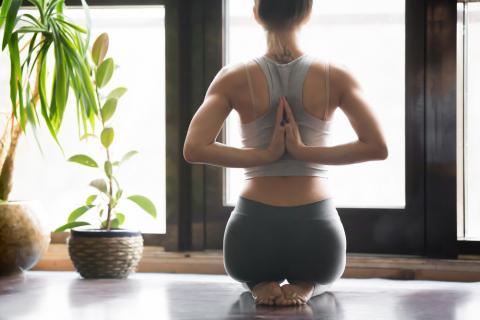 “That’s what happens when you get old and don’t eat enough calcium.”

This statement gets repeated often enough it sounds like an old milk commercial.  It’s referring to the increasing, sometimes dramatic, rounding of the middle and upper back that happens in some older people—is that really the result of a milk deficiency?  And do some people start developing the beginnings of these changes, displaying some early evidence of rounding, much earlier?

One term for the sharp rounded upper back posture that happens in old age is called a Dowagers’ Hump.  As I grew into adulthood, my grandmother became a classic example.  She was not tall to begin with, and I am 6’4” on a good day.  As she proceeded into her 90s, on her way to 96 years of age, she couldn’t even look up high enough to see my face while standing up, due to her head being positioned so far down towards the ground.

More recent research efforts however have cast considerable doubt on the “eat enough calcium” concept that is repeated so often.  If the link between these two things seems vague, the idea had gone like this: the hunched-over posture was related to vertebral compression fractures.  These spontaneous spinal fractures often resulted from low bone density that developed over time.  With weak bones the block-like vertebral body would actually compress like a piece of too-squished Styrofoam, changing their shape and leaving the spine pitched heavily forward.

Like many phrases I hear in my chiropractic office regularly, this one has just as much fiction as fact.  Ignore for a moment that healthy bone structure is dependent on many other factors, along with calcium intake.  The question is: does this old, oft-repeated phrase help anyone improve themselves or their future?  Is this “not enough calcium” statement true when it comes to our posture?

Research Reveals the Truth about Posture

I remember almost fifteen years ago during my clinical rotation in chiropractic college, the day when my clinic doctor gave me the research and said, “Here, you’ve got to read this.  This is an amazing study.  This is what chiropractors have been saying forever!”

The research was by a doctor named Dr. Deborah Kado.  She had taken large datasets from a project called the Rancho Bernardo study, a research effort that examined thousands of people followed for over four decades of their life in a Southern California community.

This was an extremely large set of data that was created, allowing researchers to ask a wide variety of unique questions.  What Dr. Kado did was rather simple, but also was really powerful.  She took data that they had accumulated about these men and women, and about their posture.  And then she ran all sorts of statistical tests on the rest of the information they had—how long they lived, what disease states they developed, what they died from (in those that had died), and all of the physical and personal info and exam findings that they had gathered on these volunteers.

And she found two really game-changing things.  The first is that the posture of these older people had a very strong correlation with how long they lived—meaning the more exaggerated the curve of their mid- and upper-back, the shorter their ultimate lifespan.  Of course, many people are familiar with the notion that correlation doesn’t mean causation.  Some things strengthen correlations, however, such as a concept called dose-dependency.  And this is what Dr. Kado found, saying this effect was in a “dose-dependent manner.” This was in her 2004 article, stating in the title that “Hyperkyphosis Predicts Mortality.”[1]  In other words, the worse the posture got, the more closely tied to lifespan it was.

The other thing that they found in this series of research studies was that the cause of these sometimes dramatic postural changes was not necessarily related to the presence of osteoporotic fractures of the spine.  In fact, a follow-up study cast doubt on the old refrain of “not enough calcium.”

Perhaps the biggest surprise is what they found over the four years of the observation period in this study.  They found the reverse to be true, that the participants with the greatest initial postural change experienced the highest number of spinal fractures in the upcoming years, meaning that it is possible that the postural changes themselves were at least partially responsible for the fracture occurrence.  The researchers surmised the possibility of the abnormally loaded spine placing uneven pressure on the front of the vertebra, contributing to the other risk factors for collapse.[2]

Other findings of this research shed light on this situation.  Not only were increasing amounts of unhealthy posture correlated with earlier mortality, they were also strongly associated with poorer physical function.  Again, they found little evidence of compression fracture related changes being the primary cause of these postural changes (less than 3% of this study population had any evidence of fracture), even though 21% of women and 44% of men met the study criteria for hyperkyphosis.[3]

Surprisingly, a consistent finding was that the more dramatic postural losses consistently belonged to the men more often than women.  All of this taken together leads to a necessary re-evaluation of the importance of postural changes, and the actions to take regarding the care of our bodies.

In a 2009 review of her and others’ work on the subject, Dr. Kado summarized the findings with the following:

“Most clinicians and patients have assumed that thoracic hyperkyphosis is a result of underlying spinal osteoporosis, but approximately two thirds of those who are most hyperkyphotic don't have vertebral fractures.” [4]

What can you do?

Armed with this information, we can do a few things.  We can put the “not enough calcium” refrain to bed as an old saying that does a poor job of explaining the true situation and even worse at giving comprehensive guidance.  In other words, it could lead to generations of people eating what amounts to chalk, dreaming that it will keep them standing up straight and tall through the decades.

Secondly, we can recognize the need for a comprehensive strategy to improving our body, our bone health, and our posture and movement.  This can and should involve a range of strategies, including proper movement such as smart exercise strategies, the right self-care like chiropractic care and other body work, comprehensive diet strategies to provide the full range of nutrients we need (and avoid the ones we don’t), and most of all, recognizing that our body is an awesome, dynamic structure worth taking care of, for our appearance, for our health, and to be shining examples of health into our old age.

ALL ARTICLES BY Jesse Davis