Stargazing for the Starry-Eyed 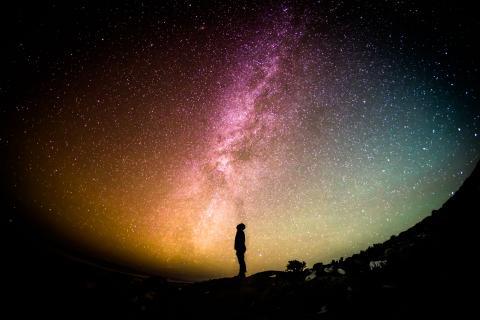 As the days begin to wane, the sun setting earlier on late summer nights, gaze up into the night sky. Stars, yes...so much more exists beyond this earth. Maybe you know what you’re looking at, and maybe you don’t. Stargazing is an awe-inspiring and humbling way to spend your summer – or winter! – nights. It can be done with tremendous zeal, maybe with a telescope, but if you’re just beginning to (or attempting to) understand the wild night sky, start by understanding the basics first.

Well, at night, of course! Though summertime weather is attractive for spreading out a cozy blanket and lying on your back to peer into the night sky, it is actually not usually the best time of year to get out stargazing. Depending on where you are and local weather patterns, it can certainly be perfect, but summer weather (think thunderstorms and moisture-laden, puffy clouds) can often be hazy and humid, which can obscure a starry view. Crisp winter nights are generally clearer than those of summer, but a snowstorm will also cloak the night sky!

Additionally, the best time to stargaze is when the moon is either in the crescent or gibbous phase, meaning it is respectively either a sliver or nearing full. Or, no moon in the sky at all will allow for greater visibility of the other light sources/stars out there!

Have you ever tried to really see the night sky while in a big city or metropolitan area? It’s very difficult amidst street lamps, illuminated signs, and the variety of schedules that exist in a city. The best place to see the dark night sky is away from artificial light, up high, which generally means getting rural – camping, on a mountain, by a lake, or in other less developed areas. The best stargazing sites in the U.S. are mostly National Parks, where light pollution is limited by the expansive wilderness provided by the protected park land. Some of the best stargazing sites in the world are also more isolated places, where the night sky is understood as affected by activity on the ground.

Though stargazing can and should be done first with the naked eye, as you gain some experience spotting parts of the night sky, some tools can be helpful to have. A red flashlight is helpful for providing some light while keeping your eyes adjusted to seeing through the dark. Binoculars can also be a handy tool, offering a closer glimpse at the “man in the moon,” if you’re a believer, craters, if you’re not. A good old-fashioned star chart can be fun to play with, and sometimes more educational given that it requires physical manipulation and orientation. You can download a star chart to print out here.

Many apps for stargazing exist and come highly recommended by sky watchers. Stellarium allows you to point your phone at the night sky for a map of what you’re seeing, featuring a catalog of over 600,000 stars and even a nighttime red light mode. Starwalk also displays a real-time map of the night sky by pointing your phone at the sky, and also allows users to explore other media related to what’s present in the sky. Interact with the map to zoom in, navigate 3D models, and read historical content related to celestial bodies. Night Sky functions the same way as Stellarium and Starwalk, but offers additional features such as “Land on the Moon” virtual tours and “Night Sky Tonight,” which describes stargazing conditions, local sites, and planet rise and set times (among other things!).  Google Sky Map is also available online.

What to 'Gaze Toward

Before going in on an expensive telescope, grab the binoculars to check out the moon! Track the moon phases using this site, which provides a visual calendar and also shows when the full moon occurs at various cities around the world.

Polaris, or the North Star, is located very close to the north celestial pole and consequently used for natural navigation.

Sirius, or the Dog Star, named for Canis Major of which it is a part, is the brightest star in the night sky.

Plieades, or the “Seven Sisters,” is a star cluster visible  (sometimes easier to see without staring directly at it) in the constellation Taurus.

Vega, the fifth brightest star in the night sky, sits in the Lyra constellation, and makes up the Summer Triangle with other stars Deneb and Altair.

Antares, a reddish star that can often be confused as Mars, is the seventh brightest star in the sky, and especially visible for the month of August.

Unlike stars, which appear to stay stationary in the night sky, planets move through the network of constellations because of their orbit. Watch for planets like Saturn (shining golden high in the sky at nightfall), Jupiter (the earliest and brightest to rise), and Venus (rising before the sun) in the month of August. Mercury (twinkling white before sunrise and after sunset) and Mars (more orange than reddish), the other two of the five brightest planets, become more visible later.

Follow NASA’s map of where the ISS has been spotted and report your own spotting, or watch it real-time as it moves!

Every year around this time, the Earth passes through the dust particles of the Comet Swift-Tuttle, which are termed “meteors” when they reach Earth’s atmosphere. This year, the meteors will fall at about a rate of 40-50 per hour, which is a rate less than last year due to moonlight that will drown out the light of some weaker meteors this year.

See a map of where in the U.S. this total solar eclipse will be visible. “Totality” – where the moon will cover the sun completely – will last about 2 minutes and 40 seconds. Total solar eclipses happen about once every 18 months, and partial solar eclipses 2-5 times per year – but they’re only visible from certain locations on the planet each time.

Get out under the wide-open sky this summer…or winter! Stargazing is free, gets you outside into the fresh air and offers endless opportunities for learning about what is beyond our world. Do it alone or with kids, stargazing will keep you pondering existence, and hopefully offer a little bit of new perspective.