How Homeopathy Heals: Is It Right For You? 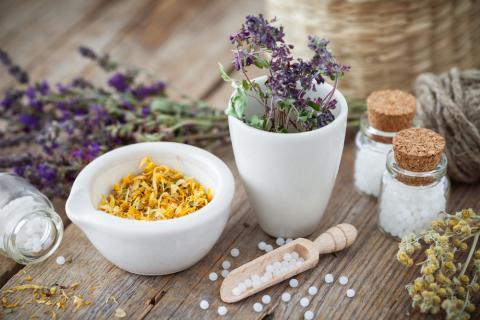 Homeopathy might seem like a new age trend, but this form of medicine has been used since the late 18th century and its popularity has been attributed to the German physician Dr. C. F. Samuel Hahnemann. Some believe that homeopathy has been around for much longer, since once of the first principles of this system of medicine is “like cures like”—similar to Hippocrates’s beliefs in 400 B.C.

The second belief on which homeopathy is based centers on the concept of dosage—in this case, the law of minimum dose, where the lowest dose is thought to be the most effective. Lastly, homeopathy traditionally follows the practice of one remedy at a time, meaning that only one remedy will be given until a symptom or issue dissipates, at which time another concern may be addressed.

Homeopathy uses plants, minerals, and in some cases, animals to treat health concerns. Homeopathic medicine is commonly produced as sugar tablets that are placed under the tongue and dissolved. A 2012 study by the National Health Institute (and reviewed by an article in the American Journal of Public Health) estimated that homeopathy is used by roughly 2.1% of the U.S. population, but those numbers are far greater globally.

What does homeopathy treat?

Homeopathy is commonly used to treat chronic and acute illness, including migraines, headaches, allergies, arthritis, nausea, coughs, and colds. Both dilution and succussion are used (and the more these remedies go through dilution and succussion, the greater the efficacy the medicine is believed to have). As such, there are very few cases in which adverse reactions have occurred, making it one of the safest complementary treatments available. Treatment can focus on both symptoms or the root cause of the problem, making it highly individualized and adaptable.

Unfortunately, of alternative treatments available, homeopathy remains extremely controversial. A 2002 study published in the British Journal of Clinical Pharmacology concluded that homeopathy produced similar results to the placebo, suggesting that homeopathy cannot be considered an evidence-based form of therapy. On the other hand, a 2005 study published in BMC Public Health demonstrated that patients showed a considerable improvement in disease severity and quality of life following homeopathic treatment. Unfortunately, little is understood about how homeopathy works to improve symptoms at a biological level, making it hard to prove its efficacy.

Additionally, most studies on homeopathy have to be closely examined to conclude that the homeopathy treatment is the only treatment having a positive effect. For example, the study mentioned above used conventional therapy along with homeopathy during the study period. As the study concludes, “the observed improvement cannot be attributed to homeopathic treatment alone.”

Is homeopathy right for me?

Before you consider trying homeopathy, there are several things to consider:

Is homeopathy the same as natural remedies?

Natural remedies might seem like the same thing as homeopathy but these two systems of medicine are worlds apart. Natural remedies are generally based on treating disease using plants; many pharmaceuticals that are used to treat everything from cancer to dysentery and an estimated half of all pharmaceuticals currently in use today come from plants. Many natural remedies have been shown to be effective in alleviating myriad symptoms, including turmeric to reduce inflammation, arnica to reduce bruising and swelling, and even essential oils like geranium or bergamot to ease pain and stress, among many others.

Not sure where to start? Contact your health practitioner, or find a naturopathic doctor that can help you to treat your illness.

Have you tried homeopathic medicine? Did you feel that it worked? Let us know in the comments below!