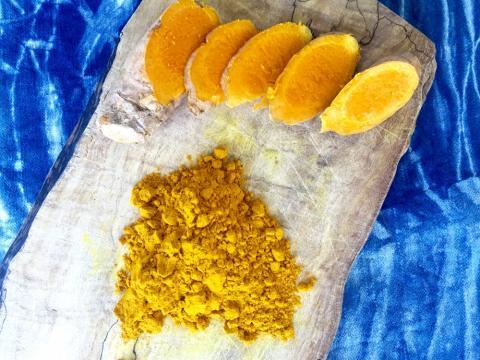 Turmeric, botanically known as Curcuma longa, has long been revered as a sacred plant for healers of many traditions. Used as food, medicine, and in ritual, this rhizomatous plant holds a well-respected power.

Today we recognize turmeric for its arsenal of curative properties: a potent anti-inflammatory rivaling the strength of pharmaceuticals; a digestive tonic supporting the liver, heart, and circulatory system; a powerful antioxidant bolstering immunity and more. Modern day research reveals this root’s ability to combat a vast array of ailments including diabetes, Alzheimer’s, cancer. The list continues. It only took us 4500 years to catch on to what the Ancient Rishis and Ayurvedic practitioners of the time already knew – this plant has a potent “prabhav,” or what Ayurveda calls a magical healing power to bring harmony and holistic health.

Turmeric’s traditional uses are steeped in Ancient Vedic culture. Archeologists discovered traces of the plant in pots unearthed near New Delhi, India, that date back to 2500 BCE. It was used as a culinary spice, a remedy, a natural dye and a ceremonial plant. In past and present, it plays a prominent role in Ayurvedic medicine. Ayurveda, which translates to “the science or knowledge of life,” is an ancient system of holistic healing intended to bring balance to body, mind, and spirit. In early literature, we see this root called by many names, some that include Haridra “the Yellow One,” Guari “The One Whose Face is Light and Shining,” Kanchani “Golden Goddess,” Bhadra “Auspicious or Lucky.”It is believed that the ancient sages came to know the medicinal properties of plants through direct perception, sitting and meditating upon the plant until the seer and the seen become one. The classical text, Charaka Samhita, states turmeric’s therapeutic benefit and power to bring healing to even the deadliest of poisons from snakebite. Throughout Eastern traditions, turmeric is used as prevention and therapy of disease.

Traditional Use of Turmeric

Turmeric is considered a “tri-doshic” remedy, meaning it can pacify all three doshas: Vata, Pitta, and Kapha. However, excess use can aggravate Pitta and Vata. It stokes our “agni” or digestive fire, and helps reduce “ama,” the toxins, from the body. It benefits the “rasa” and “rakta dhatus,” affecting the waters and blood of the body. Turmeric has an affinity for the circulatory system and since the blood pulses through every part of our being, it supports a vast array of functions in the body. With its bitter and pungent “rasa,” taste, turmeric warms and cleanses the body.

Benefits of turmeric include:

Turmeric is entwined into many traditions of ceremony and ritual. The plant was dried and made into beads worn around one’s neck as a protective talisman in South India, believed to ward off evil and bring healing. The plant was seen as the Divine Mother pregnant with prosperity, bringing good fortune to those who honored her. In some yogic traditions turmeric served as a subtle energetic cleanser, tuning the chakra centers of the body. It is woven into sacred ceremony, devotional pujas, and even weddings as the bride and groom anoint each other’s foreheads.In other practices, the bride is given a mangala sutra, a necklace dyed yellow with turmeric paste to honor the partnership and household. This “Golden Goddess” was even used as a vibrant natural dye to color Buddhist robes and garments throughout the centuries. Much of the power of this plant comes in the years of honor and gratitude poured into its cultivation and uses.

Throughout history and in modern day living, this golden spice is a staple in every Ayurvedic medicine cabinet. Discover the many ways to connect with this plant and invite it to be part of your healing journey, be it a tasty addition to your next dish or way to remedy an ailment.