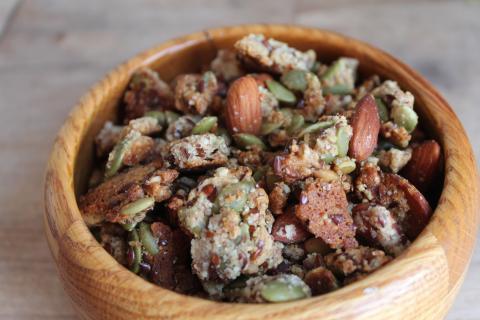 This granola comes out so crunchy and yummy, it’s the perfect thing to sprinkle onto yogurt or fruit, or have as a snack!

Years ago, I worked at a health food store that had this bin of “pumpkin flax granola” that I was simply addicted to. Every break, I grabbed a handful of that granola and munched on it furiously until my 15 minutes were over. I was having sense memories of that granola the other day and decided I need to re-create it. I managed to figure out a “grain-free” version that’s also low on the glycemic index, using only honey and a bit of stevia as a sweetener. Although the version below doesn’t include them, you can easily toss in some dried cranberries, raisins, or chopped dates for some extra sweetness and flavor.

I’ve been sprinkling this stuff on my smoothie bowls and it lends such an awesome crunch and just a touch of sweetness. The granola comes out just slightly sweet which I like—feel free to add more stevia or honey to up the ante.

For the almond flour, I just take a handful of raw almonds and then ground them in a coffee grinder which I find is cheaper and since the skin is left on, makes for a more nutty, robust flour. Perfect for granola!

I use potato starch as a binder…but you can use any kind of starch—just keep in mind that potato starch has a pretty neutral flavor, whereas arrowroot can be a bit bitter.

Make sure you “crack” the flaxseeds, as in grind them a couple times until they’re just cracked in a coffee grinder or high-speed blender, in order to let those omega-3 oils escape.

2. In a separate bowl, mix together melted coconut oil and honey and pour over top the dry mixture. Mix with your hands until fully coated.

3. Grab a baking sheet lined with parchment paper and press the granola mixture onto the paper so it’s a slab about a half-inch thick.

4. Bake at 300F for about 7 minutes, and then remove from the oven and flip/spread it around.

5. Bake for another 7 minutes and then flip again, and then bake for another 4 minutes. The granola should be golden brown at this point. Remove from the oven and let cool completely before storing.