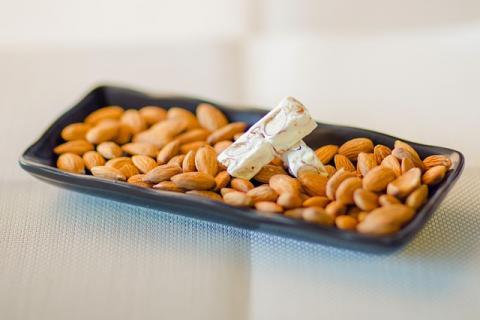 When I was at yoga school in India I encountered many other students who were also on an Ayurvedic path. It was actually my first interface with Ayurveda in action. I remember seeing one student in particular who sat with a bowl full of soaked almonds in the morning, peeling the skins, adding them to the yogic diet we were already being fed. My interest was immediately piqued. I was interested in what he was doing, as he obviously chose almonds over any other food to bring to our silent morning meals.

Ayurveda has known for thousands of years the benefits of consuming almonds for not only health, but intellectual soundness. Protecting the nerves of the body is a job fulfilled by the myelin sheath, made up of fats such as those found in almonds. By consuming almonds on a regular basis the nervous system is guaranteed optimal performance –  the result of which is a calm, stress-free disposition, critical for the aspiring yogi.

Since one’s yoga practice is deepened by a healthy nervous system (especially the vagus nerve, which correlates to the kundalini energy and the awakening human), Ayurveda chimes in as to the ways in which to keep the nervous system healthy and well insulated. Almonds play a large important role in doing just this.

Soaking almonds over-night changes the acidity found in the nut to a more alkaline disposition. By peeling the skins in the morning, and consuming around nine nuts per person, the body receives a boost of not only proteins, which are easily digestible and gentle on the stomach, but lends a fatty, rich component to the system so as to better be able to take on the stresses of the day.

The brain is dominant in its need for the fatty myelin sheath that almonds so gracefully support. By lending raw materials to one of our most vital organs, the intellect is amply blessed to perform its most dutiful task of drawing in information and dissecting it as per our need to communicate, discern choices and make wise decisions for life and the future.

The skin is also thankful for the addition of almonds into the diet as well as the external application of the oils. Smooth, supple skin is one of the benefits of utilizing the richness of almonds and the fats they so graciously offer. Along the same silky wavelength, almonds contribute to feeling sexier as they are an aphrodisiac in their effect on the body. The supple goodness of almonds helps the body to stay lubricated and excited about both inner connections – such as those found in the brain – as well as the outer connections we make with others, especially in the bedroom.

One of the blessed gifts of almonds, to men, is the build up of Ojas in the body, which is the sexual energy of the body. By consuming almonds regularly men may find themselves more drawn to connect intimately and can also find their sexual juices replenished quicker if already sexually active (especially with a thread of saffron in the mix).

If seeking to become more fertile, almonds are definitely recommended for both men and women as they contribute to reproductive health more than any other nut. Post-partum strength and vigor is also a side effect of consuming soaked, peeled almonds. Along these same lines, breast milk is enhanced and fortified and the body's ability to recover from the stress and strain of childbirth is multiplied.

After I gave birth to my oldest boy I consumed copious amounts of almond meal in a mixture containing cardamom, dates, pistachios, and ghee. It was absolutely delicious and gave me a great deal of strength and endurance that was very much welcomed after a long, intense labor.

For those who are lactose intolerant, almond milk is an excellent and delicious replacement and it is so very easy to make. I love adding spices like cardamom, cinnamon, or vanilla to my homemade soaked almond milk and always find my body in a state of gratitude after consuming such a nourishing beverage (which is also completely enjoyable).

If you want to not only feel more intelligent, but look younger too, nothing supports your quest more than consuming Ayurvedically-sound almonds regularly. Almond oils not only protect and feed the brain, but keep your skin smooth and wrinkle-free, defying the rules of gravity and holding true to the natural youthful state of a body who is following the laws of nature and the science of health – as found in Ayurveda.

Almonds are one of the best sources of Vitamin E you can find in any food, and so it is that almonds help to heal wounds as well as keeping the skin healthy and strong.

Out of all the nuts, almonds are the best for intellectual health as well as physical well-being. Long praised by yogis of old who understood the need to choose foods wisely in order to open easily to spiritual development and insight, almonds have been revered for centuries as a gift from the divine to nourish the nervous system (and beyond) for total health and peace of mind.