The True Meaning Of Tantra & How To Practice It Daily 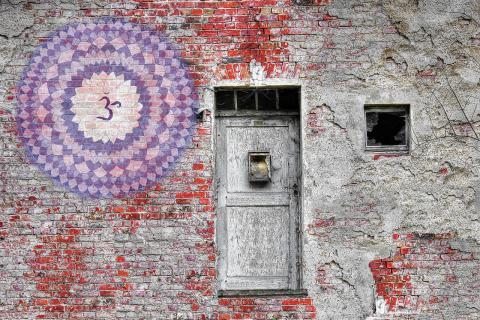 I feel I have always been a tantrika by nature. I often imagine lifetimes where I must have danced in the ancient temples of India with other women who remembered this Divine truth. How we, as the tantrikas, must have been the souls to which one turned when they were unable to contact the holy within them—whether out of guilt, shame, or fear from what horrors or traumas they had experienced. The tantrikas looked without judgment on the people or acts themselves, nor on the beliefs held by those who came wanting blessings, nor on the manifestation of reality. They bestowed the gift of liberation by seeing only the Oneness existing everywhere equally.

I used to be under the impression that Tantra referred to some kind of spiritual sexual union practice, and though Tantra can include sexuality, it is certainly not confined to that realm alone. The word itself actually means “liberation” and in application to oneself means a liberation of the body, mind, and speech—to a place of enlightenment or nirvana. As a concept, it is the very act of actually liberating all of reality from societal constructs and limitations so as to see the sacredness behind it all and within it all.

The Practice of Tantra

To become a tantrik or tantrika is to become one who dances with duality as the holy lover and elevates everything he/she touches and beholds to the holy station of its actual substance—which they know to be Source. To “practice” tantra is to undertake the task of liberating everything one comes in contact with—from its limited perspective contrived by the mind—and recognizing the sacredness within it. In practice, one must use the mind to first break apart constructs generally recognized as “truths” from the judgments placed upon them by society. In doing this, one starts to realize that only in assigning value to something does it actually conform to such judgment. But when liberated from labels of “right” or “wrong”/“good” or “bad,” any and every concept simply becomes a contact point with the Source from which everything existing in reality birthed.

Tantra in the West

As interpreted by western society, the wisdom of tantra has been applied to overcome the taboos around sex and sexuality and to instead connect one with the sacredness of intimate union. Tantra in the west has been commercialized and glamorized so as to make it more marketable and appealing to the masses. However, Tantra, when applied to sexuality—just like any other avenue of life—is to allow the one experiencing pleasure and the joy of connection to do so without guilt or shame, in full abandon, and as a pathway to the Divine within. It is to give permission for the average human and the aspiring yogi both to find sacred and divine connection with Source power through coupling intimately or through solo ecstasy.

Liberation is a huge concept to swallow. What images are conjured by the mind when considering such an aspiration? To me, it brings a sense of freedom, of wide open spaces and unlimited possibilities. It is the marker point for a truly elevated existence, one we often hover well below in this reality when adhering to the structures and systems which seem to make this reality even work. But is it working? Is this reality full of constructs and limitations “working?”

How to Live Tantra Today

To liberate—in terms of living Tantra—means to release everything from its previous containment of expression, to allow each and every person and quality of life to elevate to its next divine version. To practice tantra daily is to run around pulling the veils off of everything to reveal a more authentic truth. To practice tantra in everyday life is to see beyond the surface appearance to the holy order within a thing—and call it forth with your awareness of it. This doesn’t mean that you change anything in its expression, by the way, but instead you call forth the ability to see what is already there, hidden to your eyes before tantra.

However, in order to be able to “liberate life” with your awareness, you must first be able to liberate yourself.

Tantra begins with a process of self-evaluation and the deconstructing of beliefs. It is necessary to examine the mental programs and patterns which run constantly in the background of the mind, and to reassign languaging, if necessary, and design new mental constructs on which to run this liberation program.

So, for example, if you wish to live a life where Tantra is fully at play, you would begin to become very vigilant of your expressions and language and so you notice if you are playing out a concept or belief which is not in its liberated form. Perhaps you notice yourself commenting on a choice a friend has made and how you didn’t agree with their method or just had no compassion for their result; maybe their choice even detrimentally affected your life. A tantric examination would suddenly liberate that friend and yourself through allowing you to see the divine at play and the sacredness of what has occurred. An easy tantric phrase to begin using often, for anything is, “How is this perfect exactly as it is?”

Another example: you catch yourself saying how your body doesn’t feel good, that something is “wrong”…and then you apply tantra and you suddenly are able to reframe your experience into one where Divine inspiration is at play. Even the seemingly negative or most difficult situations or emotions can be looked at through tantric eyes and find the wholeness dancing.

All Paths are Tantra

Tantra, as a whole, recognizes that any means can be used as a pathway to reconnecting with Divine Source. The key is the consciousness involved in the Tantrik. When maintaining the stance of total liberation of form, things like smoking, drug use, alcohol, swearing, meat-eating, sugar consumption, etc. can all be seen as pathways to Source. However, the pitfall, as with any left-handed path—the practitioner must maintain constant vigilance over their perspective so as to not fall into the ruts of societal hedonism under the guise of tantra. The same is true of any spiritual practice. If the one practicing does not maintain integrity and an adherence to the consciousness of the path, it is easy to simply fall back into “normal life” experiences where you are doing all the same acts as you would in Tantra, but nothing is elevating or being liberated, and neither are you. It is a fine line.

A fine line that can turn into a new reality.

Though you can remain teetering on the line of tantra or not tantra for some time while you initiate yourself into this liberating reality, it only becomes, in fact, a reality, when you “fall all the way in.”

In other words, at the beginning of deciding to walk in the tantric way, it may be just a practice. When practicing anything, you are usually not perfect at it, and find yourself in constant correction mode, in the ever-forward movement of reframing and relanguaging your reality to align with the new belief structure. During this time, when fluctuations occur between “seeing the holy in everything,” and not seeing it sometimes, take care to keep it in stride.

Some profess to be living a tantric lifestyle so as to be able to indulge in whatever pleasure they may have previously kept themselves from, like drinking or smoking or sexual pleasure. However, during the “practicing” phase, the effects of the overriding paradigm are still present. So if you believe all things to be holy, but you still wonder, in the corner of your mind if you are doing something wrong…the effects of that distorted belief still exist. Therefore, if you drink a whole bunch of alcohol on the basis of being tantric about it, it does nothing for the potentially hazardous effects of drinking if your consciousness cannot fully transmute the practice. Understood?

With all of that being said, there may come a time, and perhaps you are already there, where you stop seeing the dividing lines between preference and aversion. When you see only the holy and the sacred masquerading as various forms. When you walk the tantric path and bless all you see as the Divine.

In the trifecta of Vedic philosophy, Tantra, Yoga, and Ayurveda are the three bodies of wisdom which make up the sciences of life. Where Yoga is a spiritually oriented practice, and Ayurveda is for the body, Tantra is the mental component. We can liberate ourselves through all of these practices. Yoga, when practiced regularly, liberates one from the spiritual level—and it ripples out to the rest of one’s being. Ayurvedic wisdom, when applied, liberates the physical body to be free-flowing and self-rejuvenating—and its effects ripple out. Tantra is the branch which is applied to the mind and is aware that, through mental mastery, the rest of the system will likewise liberate. They work together, and they are also mutually exclusive as a path—in and of themselves—to total freedom.

At the end of the day, Tantra is the unattached observer, looking at reality through an open third eye, in love and devotion to the Divine manifesting in every conceivable manner. Tantra is the love-affair we get to have with life once we jump off of the judgment seat and into the whirling dervish of it all. To become tantric is to liberate yourself from the shackles of limitation and to enter, right now, in this moment, Nirvana.