Sustainable Seafood: What Is It & Why Does It Matter? 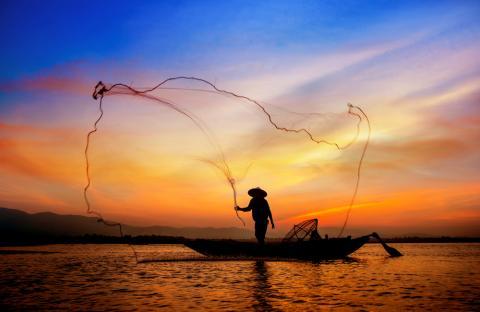 When I was a teenager, I took to carrying around a small, rectangular piece of paper that I had printed from the David Suzuki (a prominent Canadian environmentalist) website. The card identified species of seafood that were fine to eat, indicated by a green dot, species that could be in jeopardy, indicated by a yellow dot, and finally species that should not be eaten due to overfishing, amongst other factors, identified by a red dot. I brought this card with me to every restaurant and tried my best to stick to the green-dotted fish, even when certain sushi rolls were calling my name.

I’ve since lost this card, but choosing sustainable seafood remains important to me for several reasons. Not sure why it matters and what you can do to ensure we have seafood (and plenty of fish in the sea to look and marvel at!) for years to come? Read on.

There are quite a few reasons why we’re talking about sustainable seafood in the first place. Years of high-pressure demand for seafood, along with poor fishing practices and management, have severely damaged the health and abundance of the fish in our oceans.

“90% of the world’s fisheries are either fully exploited, over-exploited, or have collapsed.” This sobering fact comes from the Monterey Bay Aquarium, and is especially disconcerting as one of the most popular seafood items, tuna, is near the top of that list. Sharks, too, are at great risk: of 465 shark species assessed, more than 70 are vulnerable, endangered, or critically endangered. Bigger species are generally very slow to reproduce, meaning that the more we fish, the less chance we have for recovering these species at all.

Most people are aware of the ban on shark fin soup–after all, shark finning is one of the cruelest acts on animal species–but just as problematic is the fact that 20% of the world’s fishing catches are illegal or entirely unreported. To put this in perspective, that’s between 11 and 26 million tons!

In some cases, this includes bycatch, which is what occurs when unwanted species are caught in the process of fishing for the primary, targeted species. Some fisheries throw away unwanted fish, with shrimp fisheries being among the worst offenders: “for every pound of shrimp caught,” states the Monterey Bay Aquarium, “up to six pounds of other species are discarded.” Turtles are often at highest risk as turtles can become trapped in the shrimp nets and drown. Fisheries scientists are beginning to recognize this huge problem by creating Turtle Excluder Devices that prevent turtles from being caught in trawl netting in the first place–but there’s still a long way to go to protect all species.

Rising sea level temperatures, along with coral reef bleaching, and destructive practices like trawling and dredging (which drag equipment across the sea floor, destroying delicate reefs) have negative effects and dire consequences on sea life.

While some governments have initiated tremendously effective fisheries management plans (Barbados, South Korea, Iceland and the Philippines), still more than 40% of the world’s fisheries are employing unsustainable fishing practices.

Learning about the health of our oceans is sobering information, but that doesn’t mean we’re helpless. Individual consumers ultimately drive fisheries practices: we can help by voting with our dollars.

My teenage-self might be surprised to learn that a decade later, the best choice is still to carry a sustainable seafood card in a wallet or purse. Several apps are available, too. You can download one from this website. Several sustainable fish may come as surprising: while open net pen-farmed salmon has very negative consequences on wild salmon populations, closed containment farmed salmon can be a good choice. Sardines are another great choice, and they’re both affordable and nutritious.

If you prefer cooking, several organically-focused grocery stores offer sustainable seafood. Another way you can help is to educate friends and family on how to make educated, responsible choices.