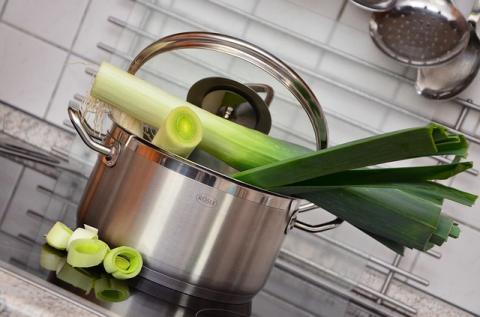 Some non-culinary adventurous people fear the vegetables that lurk at the edge of the produce section. You know they are vegetables, and probably good for you.  But you hesitate to buy them because you don’t know how to cook them, or you fear what they might taste like once you put them on the table.

Leeks are one of those vegetables.

They are stately, upright stalks that look a bit like green onions on steroids. They are, in fact, related to the onion, belonging to the allium family of vegetables.

Unlike its garlic cousin, the leek does not produce a bulb that can be separated and planted for more bulbs. It grows from seeds. As the plant grows, more soil is hilled or piled around the plant, producing the blanched white stalk.

Leeks are a favorite of mine. Perhaps it has to do with the Welsh branch of my ancestral tree. The leek is mentioned as a symbol of Wales in William Shakespeare’s Henry V. Legend states that Welsh troops pulled leeks from a field and wore them on their helmets to recognize each other during a battle against the Saxons. They won the battle on St. David’s Feast Day, and today the leek is a well-known Welsh symbol, worn on that day, March 1st, to commemorate both the saint and the victory.

The root vegetable contains many compounds found in its cousins, the onion and garlic. They offer more polyphenols that protect our blood vessels and cells than red peppers or carrots, and they are full of Vitamin B folate in bulbs, lower leaf and the upper green leaf portions. Although research is slim on this nutritious root vegetable compared to the onion or garlic, the level of polyphenols can suggest support for inflammation and type 2 diabetes, and may protect against certain types of cancer. The leek is also a source of Vitamins C, A, K and E.

But the best part of the leek is its delicate, sweet onion flavor. Pair it with potatoes for a filling soup, or cut it into rings and braise with wine for a pretty complement to wild salmon. Add bacon and pasta to leeks for a complete meal.

Choose firm white stalks with leaves that are green and show no yellowing. If you aren't able to cook them right away, you can refrigerate them for a week or two, but try to use them as soon as possible. To prepare them, remove the darker greens and the hardened root end just above the roots. The leek has lived in sandy soil, so it is important to rinse thoroughly. You can peel the layers and rinse separately in cool water, or cut into rings and rinse well in a colander. Drain well, and pat dry with a paper towel.

Once you’ve tried them, you might begin to understand why the Welsh put them on their helmets. Or at least, you’ll no longer avoid them in the produce section.