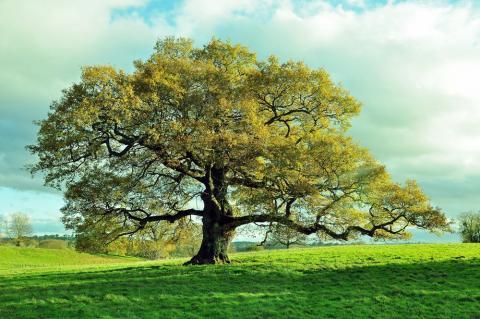 One of the things I miss about living in California is the preponderance of oak trees. They’re all over the hillsides with their beautifully twisting branches. Even small patches of oaks provide food, shade, and habitat for a wide variety of plants, mushrooms, and creatures.  Not to mention, oaks are great trees for climbing, and, if big enough, lounging in. Oaks are trees in the genus Quercus, of which there are hundreds of species.

From northern Europe to the Mediterranean, oaks were sacred and were associated with the who’s who of deities:  Thor, Jupiter, and Zeus, to name a few.  Oaks also featured prominently in Celtic culture, in which the word druid may be derived from the roots deru (oak) and weid (to see).  Deru also means to be solid and steadfast. Oak is a very hard wood, and as such, the tree symbolizes persistence and strength. The Bach flower essence for oak is for those who take on too much, and will keep plowing on even if exhausted.

Any Harry Potter readers will know that oaks figure into modern mythology.  In this series, English oak wands “demand partners of strength, courage and fidelity,” with the wand owner having “…an affinity with the magic of the natural world…”

There have been famous individual oak trees throughout the ages, such as Donar’s Oak (aka Thor’s Oak), which was a sacred tree of Germanic pagans that was cut down in the 8th century by the Christian missionary, St. Boniface. The Pechanga Great Oak Tree in California is estimated to be about 2000 years old.  Major Oak in Sherwood Forest (it really exists!) is part of the legend of Robin Hood.  In Riverside County, California is a clonal colony of oaks (trees that are genetically identical) that has existed for an estimated 13,000 years.

Oak bark, oak leaves and even oak galls are used medicinally. The galls are the balls of oak tissue that form around a developing wasp.  All are tannin-rich, making them highly astringent.  Astringency is the property of contracting tissues. In the case of tannins, this happens from an interaction between tannins and proteins on the skin or along mucus membranes.

Astringent herbs such as oak are useful for internal issues such as loose stools, diarrhea, dysentery, heavy menstrual bleeding, and mucus-y or bloody urine from a UTI.

Topically, astringents such as oak help to dry up weepy rashes such as those from poison oak or poison ivy.  Oak also helps with burns and abrasions, providing a thin tannin layer for protection.  In order of astringency, the galls are the strongest and the leaves the weakest.  So use the leaves for loose stools and the galls or bark for full-on diarrhea.

Oak bark contains quercetin, and can be included in an herbal anti-allergy formula for inflammation as well as weepy eyes and excess mucus production.  Some herbalists recommend oak as an eye wash for irritation, but I prefer a less astringent herb such as chamomile.

Don’t get carried away using oak internally.  It’s for short-term use for acute issues.  Due to its extreme astringency, longer term use may inhibit nutrient absorption and cause constipation.

Acorns were an important food staple for many folks for thousands of years. Oak was especially important to multiple indigenous cultures in California, where oaks abound. Acorns are nutrient-rich, providing a complete protein, fat, and starch. They’re rich in calcium, magnesium, phosphorus, and vitamin C.  Oak cultivation only uses 1/10th the water as grain cultivation, and acorns are more calorically-dense than grains. Acorns are also high in antioxidants.

Acorns can be eaten roasted as a snack, like other nuts, or can be ground into flour for gluten-free baking. We made acorn pancakes in a wild foods workshop and they were delicious, with a rich, nutty flavor. Acorns can be used for everything from mousse to porridge to bread, veggie burgers, falafel, and polenta, sauces, gravy…whatever your imagination can conjure.

Once acorns turn a rich brown, they’re ripe and ready to harvest. Make sure not to harvest those with a hole in them. Those are the ones in which an acorn weevil hatched and lived for a while.

The first step in turning acorns into people food is to shell them, which isn’t too difficult. Next is to leach out the bitter-tasting tannins so that the acorns are tasty and won’t block you up.  There are various approaches to this: The hot method versus the cold, each with variations. The hot water method is faster and is fine if you’re not using acorns for flour.  A cold water method is better to give you the most options for how to use your acorns in the kitchen.  After whichever method you choose, you’ll want to dehydrate them either in the sun (if no critters around to eat them!), in a dehydrator set on low, or using another method so long as the temperature doesn’t exceed 150°F (which cooks the starches and makes the flour not so useful).  If you’re not using acorns as flour for baking, then you can dry them faster at a higher temperature.

Pliny the Elder considered oaks as “the tree which first produced food for mortal man.” And there has been some talk on reintroducing this ancient food on a larger level, given the needs of a growing population and also issues such as the rise in gluten-intolerance.

The next time you’re outside, look around for the nearest oak and say hello…whether you view oaks as food, medicine, or simply a shady reprieve from the sun on a hot day.