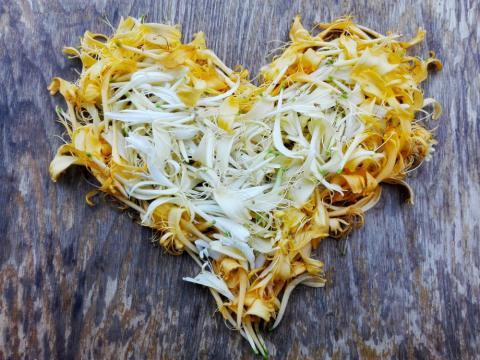 How many of you as a child used to drink the tiny drops of nectar from honeysuckle flowers?  How many still do? [Raises hand…]

Japanese honeysuckle (Lonicera japonica) is what I’m talking about…a common garden species.  Not to be confused with the variety of native honeysuckles there are, which may range from having different uses to being toxic, Lonicera japonica, has distinctive white and yellow, trumpet-shaped flowers. As its botanical name implies, it’s an Asian native that grows well in many places and has even naturalized here in the U.S.

This is a lovely, sweet-scented plant that is easy to grow and is good medicine. It’ll also attract hummingbirds and sphinx moths to your garden.  Sphinx moths are so large, they are often confused for hummingbirds!

Honeysuckle are a medicinal powerhouse.  There are multiple species of honeysuckle that have traditionally been used for medicinal effects on multiple continents, but, again, we’re sticking to one species here.

Note: Though the flowers, leaves, and stems are all used in Traditional Chinese Medicine, in some species of honeysuckle, the stems may be toxic. Also, the berries of Japanese honeysuckle are mildly toxic and you’ll wish you didn’t try them when you’re puking or pooping your brains out.  The leaves may result in an upset stomach for some folks…the flowers may be the best way to go.