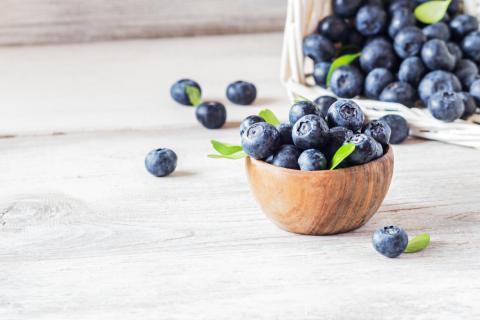 Nourishing your skin from the inside out makes sense, but few of us use this in practice. It’s easy to slap on drugstore sunscreen and spend hours outside but there are unseen, and often unacknowledged, dangers in conventional sunscreen. Protecting yourself from ultraviolet radiation is important in avoiding sunburns, sunspots, wrinkles, and dry, peeling skin, but some unprotected sunshine is also needed for optimal absorption of vitamin D. Luckily, there’s a solution to allowing your body the sunlight it needs and protecting your skin against sun damage—and it lies with what you eat.

Several websites and magazines list foods that can nourish the skin, but most of these aren’t backed by research; most fruits and vegetables contain high amounts of vitamins A, C, and E, and antioxidants to protect against free radicals. However, a 2011 study demonstrated the effectiveness of a few foods that do a particularly good job of protecting the skin against UVA damage.

Green tea offers numerous health benefits, like reducing stress, having anticancer, antitumor, and antiaging properties, and increasing cardiovascular health, as this study shows. Additionally, a 2001 study showed that the polyphenols in green and black tea inhibited ultraviolet radiation, while a 2004 study further backed this by suggesting that UVA irradiation-oxidative damage could be prevented by consuming green tea.

Both oral consumption and topical application of green tea’s polyphenols work, so aim to drink 2-3 cups of organic green tea daily for the easiest results.

Aloe vera is well-known as a sunburn relief, but it also has skin protecting qualities. Along with anti-inflammatory properties, high levels of vitamin A, C, and E, and potassium, and antiseptic properties, aloe is hydrating, working as a natural moisturizer. More importantly, aloe vera can protect against UV-induced damage.

Like green tea, aloe vera can be applied directly to the skin or consumed, but look for 100% pure aloe vera juice at your local health food store to protect your skin inside-out.

You might be familiar with sesame oil as a tasty topping to many Asian dishes, peanut oil as a cheap frying oil, evening primrose oil as a nighttime moisturizer for smooth skin, and coconut oil as a cure-all for everything from dry skin and brittle hair to better metabolism and digestion. All of these oils contain several skin-protecting properties, too. Sesame oil resists 30% of the sun’s UVA rays, while coconut oil, peanut oil, and even olive oil protect against 20%. Additionally, avocado oil can soothe and protect the skin both before and after heading outdoors. Aim to use one of these oils a few times each day. While coconut oil, and even avocado and olive oil, can be used directly on the skin, try using coconut oil in stir fries, adding a spoonful to a smoothie, or spreading it on toast.

This hard-to-pronounce antioxidant is a keta-carotenoid, plant pigments; in other words, it’s the compound that can be seen in some red vegetables, but mostly brightly-colored seafood like lobster, shrimp, and wild salmon. Astaxanthin, as explained in this article, has been suggested as a cure-all for everything from high blood pressure to immunity to Alzheimer’s, but the compound has recently been shown to be an effective anti-inflammatory, specifically with regard to skin deterioration. In a 2017 study, participants were administered either 6mg or 12mg of astaxanthin, or given a placebo. Those given a placebo showed significant changes in the quality (measured by skin moisture and wrinkles) while those given astaxanthin had delayed skin deterioration over the course of the study.

While it’s possible to take a supplement, simply eating foods rich in astaxanthin may be the best option. Look to consume wild salmon 2-3 times a week, or aim to consume red and orange-hued vegetables and dark leafy greens regularly.

Just in time for summer, blueberries are packed with antioxidants (in fact, they contain more free-radical protecting antioxidants than most other fruits and vegetables) and sweet enough that enjoying them by the handful isn’t a problem. Wild blueberries contain the highest levels of antioxidants, but organic blueberries from your local market are the next best option. A 2009 review suggested that the antioxidants found in berries can prevent UV skin damage; as such, aim to eat a wide variety of berries, though your local, in-season berries will be your best bet for skin protection.