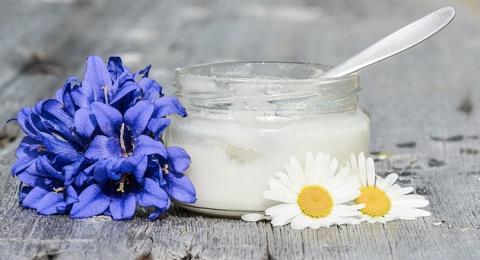 You’ve heard about the wonders of coconuts and coconut oil, but which to choose? Refined, naturally refined, unrefined, virgin, cold pressed, expeller pressed, “100% pure”…Is there a difference? If there is, do these differences affect our health?

As often happens when we take a closer look at what we’re eating and how it arrives on the supermarket shelf, opinions are strong and answers are complicated. Read on to learn a little more about the labels on coconut oil so you can determine the best one for your purpose, be it cooking and baking, oil pulling, or making your own sunscreen.

Coconut oil labeled “refined” comes from copra, or dried coconut meat. Because the drying process can produce toxins and bacteria, the copra is purified using bleaching clays, chemicals, and/or high heat. According to an article in the SFGate, some brands use sodium hydroxide as a preservative, and may use other chemicals to get as much oil out of the meat as possible.

While many refined oils have been bleached, deodorized, or chemically processed, there are also naturally refined coconut oils that aren’t processed with chemicals.

Unrefined coconut oil comes from fresh coconut meat. Unrefined oils are processed using one of two general methods: “Quick drying” (drying the fresh meat and then pressing out the oil) which is more common, according to the site Coconuts and Kettlebells, or “wet milling,” during which coconut milk is boiled and the oil separated via enzymes or centrifuge.

No bleaching agents, chemicals, or high heat are used when processing unrefined coconut oil. Consequently, it has a stronger coconut flavor than refined, deodorized oils, and it contains higher levels of polyphenols, antioxidants that are damaged by the high heat and chemicals used in the processing of refined oils.

So, which one to pick? There are benefits to both refined and unrefined varieties.

If you use coconut oil primarily for the health benefits, unrefined beats out refined with its higher antioxidant levels. However, according to Healthy and Natural World, refined and unrefined coconut oils have the same amounts of medium-chain fatty acids, such as lauric acid, which provide some of coconut oil’s most lauded benefits, including antibacterial and immune-boosting effects.

From an Ayurvedic perspective, the fresher the food, the more sattvic (calmly energizing and dosha balancing) that food is, which again gives the edge to unrefined coconut oil, since it comes from fresh rather than dried coconut meat.

But don’t throw away all your jars of refined coconut oil—it has its place, too:

What to Look For

When buying refined coconut oil, check the label for the words “non-hydrogenated” or 0 trans fats. Also look for products marked “hexane-free” (some companies use the chemical, often extracted from petroleum and crude oil, in the refining process). Although the FDA doesn’t have strict guidelines about the use of the label “natural,” looking for this word can also help you steer clear of oils that have been chemically processed.

Unrefined coconut oils are sometimes labeled “virgin,” “extra-virgin,” or “pure,” but these terms don’t really have any weight or regulated meaning in the coconut oil world, so if you’re looking for unrefined, make sure that word is somewhere on the label.

Fortunately, these two processes are not that different, and neither uses chemicals. During the expeller-pressed process, the press squeezes the oil from the coconut meat mechanically. According to coconutoilfacts.org, the resulting pressure naturally increases the heat of the oil up to 210 degrees Fahrenheit. This high temperature causes a minimal loss of nutrients, but gives the oil a toasted, nutty flavor.

The cold-pressed process is the same except that the temperature is controlled so it doesn’t rise above 120 degrees Fahrenheit. Because of the lack of heat, the flavor and nutrients (such as polyphenols) are better preserved than with expeller-pressed oils.

The nutritional profiles of expeller- and cold-pressed oils are nearly identical, but if you want to get the most nutritional bang for your buck, cold-pressed does have the advantage. The difference really comes down to taste, whether you prefer the nuttier flavor of the expeller-pressed or the milder coconut taste of the cold-pressed.

One last thing to keep in mind when selecting a coconut oil is how eco-friendly the brand is.

For most of us, coconut is not a local crop, meaning our favorite products have to travel far to reach us, from Indonesia, the Philippines, and India. This cross-continental journey contributes greatly to overall greenhouse gas emissions. And there are other indications our coconut cravings may not be as healthy for the planet as they are for our bodies: EcoCult points out that the relatively recent increase in demand for all things coconut has created monocrops and diminished biodiversity, draining the soil of nutrients and pushing farmers toward the use of chemical fertilizers, which in turn leave the soil in need of “purification,” a process often involving more chemicals.

To reap the health benefits of coconut oil while limiting your environmental impact, do a little research. It probably goes without saying that an oil labeled “organic” (and backed up by a USDA, Quality Assurance International, or Non-GMO Project trademark) is better for the environment. Also look for a fair trade certification, which helps ensure that the product is made with the consumer, the producer, and the planet in mind.