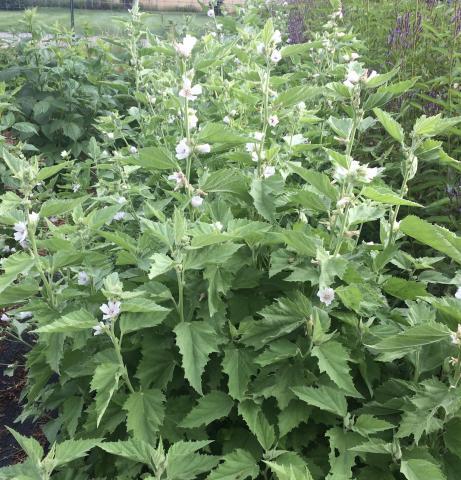 Mallows are great plant allies for our health. You may be familiar with marshmallow root, but did you know that the flowers and leaves are also good medicine?  And that other mallows are equally useful?   These include Hollyhock (Alcea rosea), that beautiful and easy-to-grow ornamental plant; Globe Mallow (Sphaeralcea species), a denizen of more desert-type areas; and Wild or Common Mallow (Malva neglecta & M. sylvestris), a “volunteer” that shows up in gardens all over the place.  I use Wild Mallow (aka Cheeseweed) most regularly because it’s so easy to find. In fact, when I had a greenhouse, I’d just let it grow so I’d have a fresh supply in the winter!  I’ll refer to them all simply as “mallow” here.

Many (but not all!) of mallow’s medicinal effects are due to large, complex sugars called “mucilage.”  Mmmmmm, sounds appetizing, huh?!  Despite the sliminess, the tea is actually quite pleasant. And, the slimier your mallow tea, the more mucilage you’ve managed to extract, the better.  So without further delay…some of my favorite uses:

Mallow root, leaf, and flowers all activate the immune system, much like echinacea. This is most effective at the first sign of an infection but also can’t hurt in an ongoing infection.  Lungs, sinuses, urinary tract, skin, vaginal, whichever…

Mallow leaf, root and flower are active against bacteria, but are not as strong as other traditional remedies like yarrow and usnea.  That said, mallow provides cooling, soothing pain relief and support for the urinary tract lining, as well as a bit of antimicrobial effect.  So I almost always use it together with these other herbs.

I live in the southwestern Rockies, a dry, dusty climate that is hard on the respiratory tract lining. Mallow soothes the lining, relaxes irritating coughs, and helps open up the airways. Mallow is particularly great when you’ve coughed yourself hoarse either from an acute infection or from longer-term issues like chronic bronchitis. As with urinary tract infection, I don’t use mallow by itself for respiratory infection, but it’s a fantastic formula addition as long as long as you aren’t already overly mucusy!  Research has even shown it to be helpful for that annoying dry cough that’s a side effect of ACE inhibitors, common medications used for high blood pressure.

An interesting side note (well, interesting to nerds such as myself)…Mallow tea can soothe digestive membranes because it comes into direct contact with them.  But how in the world does it work in the lungs and urinary tract? Especially since the medicinal mucilage is thought not to be digested?  One thought is that the effect the mucilage has on the gastrointestinal (GI) tract impacts these other sites through nervous system effects…influencing mucus production, reducing spasms and inflammation even without directly contacting these tissues (1). Even in the GI tract, it seems likely that the mucilage is doing more than just soothing the lining by coating it. Research suggests that it actually influences cellular functions, impacting cellular growth, chemical production and lifespan, all relevant to tissue healing.

Mallow leaves are a nutritious and tasty green to use in smoothies, salads, soups, etc.  They provide calcium, magnesium, selenium, potassium, zinc, iron, beta-carotene, vitamin C, and a variety of additional nutrients and antioxidants. They’re best when young and mixed in with other greens that have more of a crunchy texture. The flowers are also edible and are a lovely addition to salads when freshly picked. The fruits (while still green) and seeds therein are edible as well, providing healthy fatty acids and protein and serving as a wild harvested caper substitute. The leaves and/or the powdered root make a nutritious thickening agent for soups, stews, and sauces. For some great recipes with Wild Mallow that can also be used with Hollyhock check out reference # 2 below!

Despite its mild diuretic effects, mallow can seem more hydrating than water in dry climates.   In Traditional Chinese Medicine, marshmallow root (Yao Shu Kui) is a yin tonic…it supports the cooling, moistening aspects of the body.  The leaves can be used similarly.   I learned from my teacher Pam that mallow is great for folks so nauseated that they can’t keep plain water down…and it works!  Mallow is great for all sorts of dry conditions both inside the body and out.

How To Prepare Mallow

I use mallow mostly as a cold infusion. I also use it as a low alcohol extract. You can do this at home by filling a jar two-thirds full with dried mallow and then filling the rest of the jar with a mix of water and vodka, half and half.  Let it steep for 2 weeks then strain.   The simplest way to use it is to toss a teaspoon of powdered leaf, flower, and/or root in a glass of water.   Bottoms up!