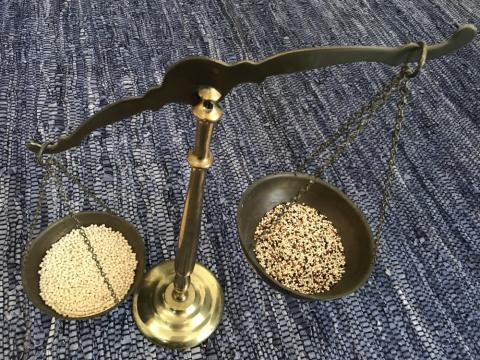 The Scoop on Quinoa:

The Scoop on Couscous:

Now while quinoa and couscous look very similar, they do differ in nutritional value and you can’t just go by the nutritional values mentioned above. Quinoa is a superior carbohydrate compared to couscous as its glycemic index is 53 which means it doesn’t spike your blood sugar levels. Quinoa becomes great food for anyone with insulin sensitivity. Also, the proteins in quinoa are the ones similar to those in beans – meaning that it is a complete protein and contains all the essential amino acids that you need to build healthy body tissues.

So as tasty and exotic as couscous is, nutritionally it is similar to white pasta – a simple carbohydrate. Quinoa, on the other hand, is nigh well a superfood, especially for vegans and vegetarians who need to get protein into their diet without animal products. So it is quinoa all the way if it’s health that you are after.

If you still love couscous, remember that it has a glycemic index of 65, which is way higher than quinoa. Also, if you have couscous once in awhile, it’s fine, but if you opt for it on a daily basis – remember that it lacks the variety of nutrients found in true whole grains like wheat. When buying couscous, remember to opt for whole-wheat couscous as it is more nutritious than the regular variety since it contains 5-6 grams of fiber per serving, which can help you meet the recommended daily amount of fiber.

Basically, it does boil down to the fact that quinoa makes for a healthier choice, even if couscous makes for a tastier one. Eaten in moderation, there’s no issue with either, and as long as you pile your couscous plate with plenty of veggies, healthy free-range meats, and hold that oil.