What Is Hatha Yoga? 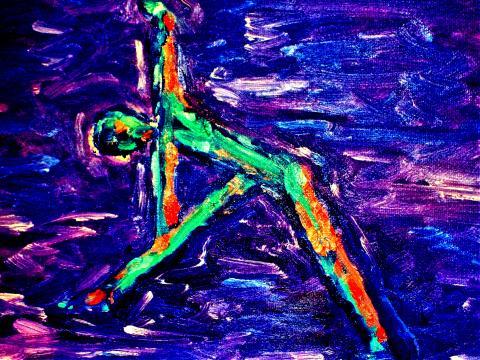 I practiced yoga for many years before I actually knew what Hatha Yoga meant. If you don’t know, it’s nothing to be ashamed of -- it’s been trendy to practice pieces of Hatha Yoga for years without a deeper understanding.  Yet the actual meaning of what so many are participating in and the journey they are activating within is extremely transformational. The intention and frequency behind the concept “Hatha Yoga” is incredibly deep and profound and I’d like to discuss it here.

What really is Hatha Yoga?

The Sanskrit “Hatha” is comprised of two parts: Ha - meaning sun (also knows as the dynamic, masculine) and “tha” - meaning moon (or the receptive feminine). In the body there are two main psychic channels, which run up the spine, termed Pingala - the solar force, and Ida - the lunar force.

You probably know by now the meaning of the word yoga which translates as “to yoke; union; or to unite.” Thus, the pair of concepts (ha -sun and tha -moon) together refers to the process of uniting the solar and lunar forces in the body, both masculine and feminine (to then flow united through sushumna nadi in the spine) - which is also understood to be a unification between the hemispheres of the brain. Ultimately, Hatha Yoga’s goal is to gift one the inner marriage of total integration, which comes from refining awareness within, strengthening the body systems, and consciously choosing to bring energy up the spine to the brain center in a unified process.

Traditionally, Hatha Yoga consisted of a variety of steps, beginning with the use of the Shatkarmas, or purification practices, which prepare the body for the influx of energies (awakening of kundalini) which were to come from the techniques to follow. These shatkarmas are outlined in the article: Intro to the Shatkarmas: Yogic Cleansing Practices for Enlightened Living.

Following thorough body cleansing, the next step is to introduce a series of postures or asanas, starting with the simplest of joint rotations, in order to get the circulation moving and to strengthen muscles. This became important knowing that a spiritually attuned being would be big energetically, and needed a strong looking and functioning body in order to match the increase in frequencies, and to keep the body healthy and immune system fortified.

After postures, Hatha yoga addresses the practice of pranayama, in order to prime the nasal channels and psychic energy systems for an upleveling and greater reception of prana or life-force energy which rides on the breath. After breath awareness, try turning awareness to the inner realms through cultivating pratyahara practices (withdrawal of the senses) as in yoga nidra. Following this it is recognized that first Concentration (Dharana) and then Meditation (Dhyana) occurs. After this comes Samadhi (liberation) of the mind into a state of no mind.

Hatha recognizes the importance of mudras for opening psychic channels, as well as various bandhas (locks) to encourage the storing and cultivation of psychic energy in the body.

These are the basics of Hatha Yoga, while Tantra and Kundalini yoga could also be recognized as an aspect or (advanced) branch of Hatha, as it is all about the recognition and channeling of pranic energy along the spinal cord and through the chakra centers as well as directly with the energies of life.

Often it is thought that Hatha is a more body-focused yoga, that it is largely postures and breath, when the truth is that Hatha refers to the awareness of harnessing life force energy through the psychic channels of the body. The sun and the moon metaphor gives a clue as to the direction of the practice, seeing how the most powerful bodies in our solar system who have the greatest influence of light (consciousness) over this planet are the sun and the moon. Together, they make up the light of the day and the night, representative of our own consciousness within, illuminating the path of the Self.

Why Asanas Equal Hatha in the West

Sometimes it’s easier to swallow this deep of a concept if done in stages, which is, I believe, why Hatha Yoga in this country is largely posture oriented. We are a culture of physically-oriented individuals. If deeper concepts are to be understood and embodied, it is helpful to meet one’s consciousness where it is. In the west, we are steeped in our bodies and body-consciousness -- and not always in a good way.  In one of the sacred Hatha Yoga texts by Swami Svatmarma, Hatha Yoga Pradipika, it is discussed how if one must enter in through the postures alone, these will eventually transform the mind and awareness of breath, awareness of the need for cleansing, etc. So just begin wherever the student is most willing.

My Experience at Hatha Yoga Homebase

When in India, I entered a traditional Hatha Yoga school for a 4-month immersion course and I had no idea the variety of skills and tools I would acquire. I started to see Hatha Yoga as the Mother of all yogas and Raja yoga as a simple tweaking of this path to include the yamas and niyamas and a disregard of the cleansing practices. At yoga school the concept of Karma yoga was deeply honored and expected as part of our days -- also known as Seva, or Selfless Service. Mantra was a huge part of our day, including bi-monthly chanting of the entire Bhagavad Gita in Sanskrit. Tantra/Kundalini yoga was the more advanced course offered at the school, though our philosophy discussions taught us the basic terminology of these teachings and it was here that I began to understand, more deeply, the great awakening I had had during kundalini yoga classes years before, and how to define my experiences.

The Hatha in All Yogas

All yoga could really be defined as Hatha Yoga -- as the aim of every branch of yoga is to reunite one with the opposing forces in the body and bring one into inner union. Hatha Yoga holds up as the most generic term in the industry and is often given “basic” status to accompany its name. It’s always good to return to the basics, for without understanding the foundational elements of an art, it is difficult to really excel in the advanced techniques. Primary skills are honed in the most basic practices and understandings which fortify the body and mind to handle the deeper wisdoms.

By familiarizing ourselves with what Hatha Yoga really is, perhaps we can begin to see the value in learning the art of yoga from the ground up. Hatha yoga -- and the understanding of it -- provides a powerful framework for all yogas to merge with and umbrella under. For example, Bhakti yoga is the yoga of devotion -- which allows the practitioner to merge with their inner divine self through chanting, song, dance, and praise. This provides a spontaneous rising of the kundalini and a marrying of the divine masculine and feminine components within through pure surrender. Swara yoga is the science of brain-breathing, which helps one to unite the channels on the right and left side (ida and pingala) through observation of the breath. Vinyasana is a style of using hatha yoga postures (asanas) in a specific series; this is the same for Ashtanga and Ieyengar yoga as well.

Bringing it into the Present Moment

We can all actually practice Hatha Yoga right now in our respective homes or work locations right now. By taking a drink of water to consciously clear out the system, placing our bodies in a comfortable, upright, balanced seated position, with awareness, and breathing in and out keeping attention on the breath, the brain hemispheres begin to come into harmony. Sitting with this practice for a few moments can cause you to withdraw your senses inward and experience moments of concentration and meditation. This can bring moments of inspiration, flashes of insight, and freedom in the body-mind, as well as feelings of ecstasy associated with Samadhi (liberation). All of this while the body repeats the mantra of your heartbeat and remembers its natural state of divine union. Namaste.