Why Are Fermented Foods Healthy? The Science in Three Steps 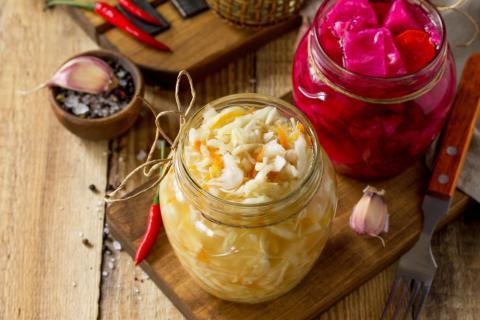 You might know that naturally fermented foods are one of our closest nutritional allies, but do you know the science behind your sauerkraut?

More and more studies are backing up what we’ve known for millennia about lacto-fermentation, adding a much-needed dose of holistic wisdom to the culture at large. It seems as though every time a study is conducted, more ancient knowledge quietly transforms into scientific fact. Not only is this research satisfying, but it also gives us a closer look at why fermented food plays such a critical role in our diets.

Grab a bowl of kimchi or a glass of kombucha and settle in while we dive deep into why fermented food is healthy.

Lacto-fermentation occurs when friendly bacteria (anaerobic lactobacillus bacteria, or LAB) outnumber and overpower the bacteria which cause decay and illness. “Anaerobic” means that these probiotic (pro-life) bacteria thrive under zero-oxygen conditions, which is why food is sealed away during the first stages of fermentation.

LAB are present all around us, particularly on fruits and vegetables, but make up only 1.5% of all bacteria. To provide the support they need to overpower the bad guys we add whey or salt along with the product being fermented, both of which are kryptonite to unwanted bacteria.

As the LAB increase in number they feed on natural sugars and carbohydrates, producing both acetic acid and the all-important lactic acid. Lactic acid is the secret behind the taste of fermented foods, but it’s also the reason fermentation exists at all: vegetables and fruits remain well-preserved in a lactic acid-rich environment, and the low pH levels kill off any remaining aerobic bacteria.

Step 2: The bacteria get to work

We all know that probiotic bacteria are vital to our well-being, but there’s more to fermented food than a healthy gut.

Fermentation pre-digests carbohydrates and proteins, breaking down cellular structures so that nutrients are both more concentrated and easier to digest. Enzyme levels also rise, making fermented foods a critical choice for anyone battling adrenal fatigue. Finally, as if all this wasn’t enough, certain fermented vegetables (like cabbage and cauliflower) also produce greater levels of glucosinolate, a natural compound which is currently being tested against cancer.

Some vegetables are far healthier when fermented for other reasons. Corn and some other grains contain anti-nutrients like phytates, which obstruct the absorption of both zinc and iron. Lacto-fermented corn has a much lower phytate content than fresh corn as well as more available nutrients - a double home run for anyone who enjoys corn flour tortillas or corn relish.

Despite the vast numbers of bacteria living inside us, we’re not very hospitable to newcomers. Scientists believed for decades that few probiotic bacteria could survive the experience, but studies into fermented dairy and vegetables have shown that enough do to make a difference in the health of our personal biome.

This is the point where research begins to fail mainstream medicine. Articles on fermented foods often hedge their bets, given that scientists have not yet been able to explain why the health of our gut can have such a dramatic impact on our overall well-being. What we do know is that ailments from obesity to anxiety have been helped by regularly eating naturally lacto-fermented foods, which both scientists and ordinary people across the world have observed. The answer to “how” will have to come later.

It will be exciting to see how this research develops, but all signs point towards fermented foods being a vital part of a truly nourishing diet.

ALL ARTICLES BY Shay Sinclair