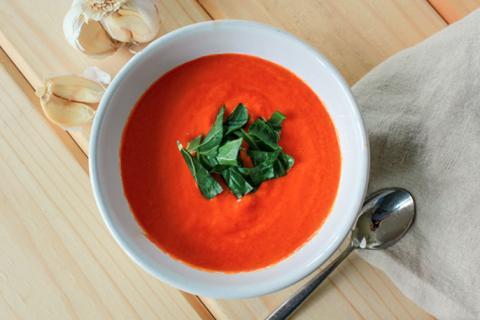 If you like simple, delicious food, then this recipe is for you. Today we’re taking one of the most common vegetables—red bell pepper—and transforming it into a silky, slightly sweet, slightly spicy vegan soup. This soup is packed with nutrients, and it’s easy to make, but it’s the flavor that will ultimately inspire you to ditch the canned version, so popular at supermarkets, forever.

Food is about so much more than physical sustenance. It’s also about politics, culture, and science. It’s this last aspect—the way food changes shape and flavor depending on how we treat it—that makes today’s red bell pepper soup a little magical. It’s fun to take common foods like bell peppers and cook them in a way that shows a different side of their personality. Of course, we know raw bell peppers have a lovely crunch, and when pureed, they make a wonderful dip, but this soup has a distinctly silky texture that causes most people to do a double take. Oh and did you see that lovely red color? Seriously, you have to try this soup.

The lovely texture of this soup is created through the cooking method and the inclusion of (full fat) coconut milk. While some people find roasting bell peppers a chore, pretty much everyone agrees that they’re worth the effort—they’re so delicious. To make the task as easy as possible, transfer the bell peppers to a covered bowl after they’re done roasting and allow them to sit for ten minutes. This will encourage the skins to slip off easily; plus, removing the skins will give your soup that silky, luscious texture. Another tip: try to keep each bell pepper relatively intact when you peel it. Then, when you open the bell pepper, you can remove the stem, core, and seeds in nearly one swoop. There are always a few errant seeds but handling the peppers with care will minimize this challenge. Whatever you do, try to avoid rinsing the peppers to remove the seeds, which will diminish flavor.

Yes, But What’s In Them?

On cooler spring days, this red bell pepper soup is nice with warming spices like red pepper flakes and basil; when the weather is warmer, try it topped with fresh chopped cilantro. Either way, you’re going to end up with a delicious small meal or first course that will remind you of the quiet magic that exists in everyday food, the garden, and in nature.