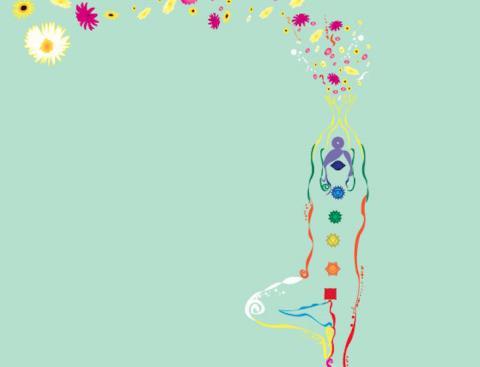 You wave your ice cream cone in front of your friend’s face when you know she is on a diet…and it falls flat on the ground.

You notice that the tire that needed constant filling with air—and which you ignored—is now flat just as you are heading out the door to attend a special event. You won’t make it there in time, now.

You try to keep up with the flexible person next to you in yoga class, and wake up the next morning with a sore back and neck.

These situations are all quite ironic, yes. Or, one may say: “Karma got you!” or “That sounds like bad karma.” The phrase “karma” gets tossed around fairly often, but what does it really mean? In Sanskrit, karma means action or doing, and it symbolizes the law of cause and effect. Action may either be physical or mental, independently motivated or group-driven. Everything we do—whether movement or thought—is a type of action, and everything we do has a consequence. The action is the cause, the karma, and the consequence is the effect, or what some may define as “good” or “bad.”

Rather than using the terms “good” and “bad” to describe karma, I prefer to use the terms “impure karma” and “pure karma” to differentiate those actions that may have a negative or positive effect. Pure karma is action in selfless service to others.  Impure karma is action with the expectation of gaining or benefitting from said actions. Perfect karma is a step beyond pure karma, performing an action with absolutely no desires or involvement. Perfect karma takes practice, just like any yoga practice.

Contrary to the examples above, the situations below are examples of pure karma—actions out of genuine service to others without expectation for something in return. As a result, the actions have a positive effect (at any given time, and not necessarily in any predictable pattern, as shown by the underlined effects below) on the life of the person who acted selflessly in service to the global community.

You see a woman with a walker struggling to open the door to a shop as you’re walking by. You stop to hold it for her to enter and then continue on your way.

Your garden is exploding this year for some reason (maybe because you held the door for the woman last year!) and you decide to share your harvest with your neighbors. Later in the year, a friend brings you his homemade tomato sauce!

You are on a hiking trail and see litter someone else has left. You put it in your backpack and carry it out with you. At the summit, someone offers you a trail snack—thank goodness, you’d forgotten yours!

The 7 Branches Of Yoga

To understand more in depth how karma yoga works, it is important to understand the seven different branches of yoga practice. Each focuses on a different aspect of yoga philosophy with the ultimate goal of deepening one’s spiritual connection and understanding. Karma yoga is one of these branches, and arguably the branch that may lead to the greatest sense of happiness.

Bhakti yoga is the simplest type to practice as the path of love and surrender to the Divine. Bhakti yoga focuses on seeing the Divine in everything, and on loving and accepting everyone. Through devotion to the merciful and all-loving Divine, the practicing individual receives mercy, love, and grace in return.

Mantra or Japa yoga is the path of honoring the Divine through sound, or sacred utterances. Japa yoga is the repetition of a single mantra or Divine name. Mantra yoga involves the repetition of many syllables, words, or phrases that honor the Divine. Through chanting sounds that originate in each of the seven chakras, mantra or japa yoga cleanses, purifies, and focuses the mind towards the yamas and niyamas.

Hatha yoga is the path of linking the mind with the body, the physical with the mental. By using the breath to guide movement through physical postures, hatha yoga draws one closer to the Divine through a sort of “moving meditation” practice. Through asana, pranayama, mudra/bandha, and nadanusadhana, the practicing individual develops a flexible, stable, and purified mind and body.

Ashtanga yoga is the eight-limbed path founded by Patanjali, and includes the yamas, niyamas, asana, pranayama, pratyhara, dharana, dhayana, and Samadhi. Ashtanga yoga reaps the same benefits as hatha yoga, but is more concentrated on mental strength, emotional freedom, liberation from desires and attachments, and a deeper understanding of the self.

Jyana yoga is the path of knowledge (“jyana”) and wisdom, and focuses on the disciplined study of the scriptures and the self. Jyana yoga does not incorporate asana (physical postures) and pranayama (movement of vital energy). The individual practicing jyana yoga is liberated from worldly desires/attachments and ignorance, and develops the ability to differentiate between illusion and reality.

Tantra yoga is the advanced path of seeing the Divine in everything, especially using the human form to access powerful divine energy. Tantra yoga engages the use of specific mantras, mandalas (sacred circles), and sacred purification ceremonies. The individual practicing tantra yoga may engage in visualization activities, sexual acts, and tamasic activities to gain spiritual liberation or powers, union of the Shiva (male) and Shakti (female) energies, and freedom from suffering.

Karma yoga is the path of selfless action, or selfless service. “Karma” means “action,” and karma yoga focuses on detachment from the outcome of one’s actions in order to serve all beings as well as the Divine.

How do you practice karma yoga?

Karma yoga seeks to free individuals from bondage caused by (impure) cravings or desires associated with an action. The action itself does not create the bondage, but rather the attitude towards or intention behind the action may lead to bondage (or lack of freedom from suffering).

In the examples above, if I had picked up some trash I’d seen with the pure intention of caring for Mother Earth but then left my own trash expecting someone else to do the same, this would create a cycle of bondage, according to karma yoga. Karma yoga is meant to be freeing in the process of spreading positive energy into the world with the faith that positive energy will return. Part of this idea is reflected in the Golden Rule: “Treat others as you want to be treated.” Karma yoga means, more specifically: Spread the energy that you want to receive…but trust that you will receive what is right when it is right.