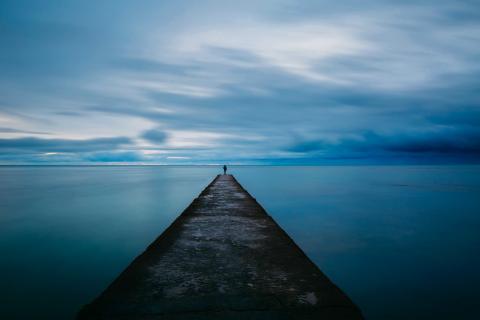 My mother is Christian, but she is a Bhakti yogi, no doubt. Her entire spiritual practice is that of no-minded devotion. She is not about the letter of the law, but rather the heart behind her worship. I admire that about her, and though I do not believe in the same way she does, I can learn a lot from her devotion.

Bhakti is a Sanskrit word which refers to having an emotional devotionalism which is often expressed as song, dance, poetry, prayer or a combination of these. Bhakti can show up as worship to a specific deity such as to Jesus Christ in Christianity or Allah in Islam.  By surrendering in deep devotion, one can find union with the Divine Beloved.

Rumi, a well-known Sikh, is a popular Bhakti, constantly consumed in writing poetry to the Divine. Krishna exemplified Bhakti through his union to Radha, as did Hanuman, in constant service and devotion to Ram.

Living in Portland, Oregon I have been introduced into the variety of ways in which Bhakti yoga can manifest, including chanting during yoga practice, ecstatic dance on Sundays, or faithfully obtaining one’s morning latte or daily dose of chocolate. Bhakti yoga is as personal as the practitioner and the aspect of Divine being worshipped.

In yogic tradition it has been outlined that there are numerous paths to nirvana, including Karma yoga (acts of selfless service); Mantra yoga (the use of mantras and sound, which is also very Bhakti); Hatha yoga (with postures and breathing); Jyana yoga (the path of self-reflection); Tantra (the left-handed path); and Bhakti yoga (the path of devotion)—just to name a few. Any path chosen is legitimate and it should be noted that since every person is unique, the way in which one connects with the Divine within is likewise personal. So, even though there are a number of paths listed here, let it be known that these are obviously not the only paths outlined in the yogic tradition.

One of the most liberating feelings I have ever experienced was landing in India and feeling the mental space there—and the very tangible knowing that whatever you believed was acceptable there—and in fact supported. It was during my wanders in the Motherland where I recognized first that belief is as individual as the person and that no one ought to decide how another person worships. I realized that it is perhaps impossible for any two people to know and experience the Divine exactly the same—so unique is each of our perspectives of such.

Over the course of my life I have gone through major Bhakti phases, (though overall, I’ve related as more of a jyani yogi). There were times when all I wanted to do was construct altars, light incense, and chant. I would, in some stages, find freedom in smoking a bowl and twirling in prayerful devotion as poetry streamed through me and laughter and orgasm became my language of expression. Other times, rising before dawn to chant and meditate consumed my life. And yet other Bhakti phases had me spending all day in the garden communing with the plants, making herbal medicines and offering them back up to spirit. To practice Bhakti is to devote one’s entire existence to praising the Divine in any way you are led.

In Bali I noticed that the people there are very much Bhakti yogis, always leaving work to go to the temple and worship. On any given day you could find the shops closed, offerings left on the porch, and every villager in a long line on the way to temple—the women all carrying various heights of fruit offerings on their heads. It was a most inspiring display. This constant state of worship struck me as the most important thing in the Balinese lives. They put devotion above commercialism and rules, without even blinking.

In the states it seems that we struggle with people who are “overly Bhakti.” It is almost frowned upon and questioned for someone to be “too worshippy” or too devoted to a cause; we even use the word “cult” if we feel someone to be too involved (in our opinion) in worshipping any specific spiritual teaching or teacher. This is an unfortunate state of mind to hold, for devotion is a liberating mindset, allowing the devotee to surrender control to the Divine, following the promptings of spirit to move them at will.

I find a great deal of beauty in one who is full of Bhakti; perhaps I envy it a bit, as I have always tended towards a more jyani path even though I have definitely enjoyed long-standing Bhakti times. As I get older I find myself releasing more of the mental around my spirituality and entering more and more into a state of Bhakti. I am finding great wisdom in letting the Divine lead and using my energy to support the praise of a power greater than me—leading my life.

Have you ever seen the whirling dervishes? Have you ever twirled yourself? This, in my opinion, is one of the ultimate practices of Bhakti—to twirl and twirl and lose oneself in the chaotic grip of the Divine. It reminds me of childhood and spinning forever till dizziness overtook. I can remember the laughter and silliness it provoked in me to get that lost in movement and motion. A sort of holy ungluing occurs in the twirl, one that I feel the true dervish finds as the arms of the Divine Beloved…a place of Cosmic remembrance beyond linearity and “the known.”

Bhakti yoga is all heart. It is devotion for the sake of connecting in love and only pure love. In the stories of Hinduism, Radha represents the Divine Love of the Mother, the personification of Bhakti. She is pure Shakti—the life force energy of unconditional love and creation we all inherently crave remembrance of and entanglement with. In the union of Radha and Krishna, Divine Consciousness (as embodied in the form of Krishna) marries Radha—and utterly devotes himself to an eternal romance with Divine Love.

It is unnecessary these days to follow only one path strictly, unless you are called to. Each and every one of us can add a little more Bhakti into our lives in the way of daily song, dance, prayer or altar worship. However you feel called to practice Bhakti, you will find your life elevated by increasing your devotion and reducing your mental requirements for “results.” The Bhakti yogi knows that the outcome lies in the arms of the Divine, and through worship, praise and gratitude, the blessings are bestowed in alignment with a higher power. We could all use a bit more Bhakti worship in our lives. For truly, who do we think we are attempting to control fate?