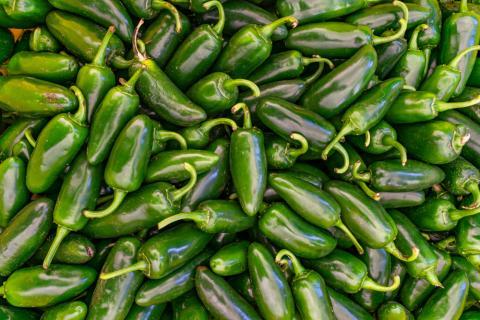 Jalapeno peppers are a member of the family Solanaceae commonly known as the Potato family of the genus Capsicum L. or pepper P. The plant is native to Mexico and was used by the Aztecs for centuries. It is the most common of the chilies grown in Mexico and because of the thick skin cannot be dried like other chilies. Jalapeno is a versatile pepper that can be prepared in various recipes and is considered a mild pepper. The name is derived from its region of cultivation Xalapa (Veracruz), which is also spelled Jalapa and they are also known as chiles gordos, huachinangos, and cuaresmeños. Jalapeno pepper is nutritionally rich and is used as a healing herb. It is necessary to thoroughly wash hands after preparing jalapeno peppers and do not put your fingers anywhere near your eyes after preparing them. Today in Mexico, approximately 40,000 acres are used to grow jalapenos and they are also commercially grown in Texas, China, Spain, Peru, and India.

Jalapeno peppers grow to about two to three inches in length and they are a deep green as they develop and mature to red when ripe. The plant is a perennial that reaches a height of twenty-four to forty-eight inches. The fruit is shaped like a bullet and contains numerous white, flat, round seeds. The chili is considered mild on the heat index Scoville scale rating from 2,500 to 8,000 SHU which is comparatively low when compared to the world’s hottest peppers. The heat of the jalapeno comes from a substance called capsaicin that is part of the chili.

Jalapeno peppers are rich in nutrients, containing vitamins that include A, C, D, E, K, B6, and B12.  They are also rich in minerals: calcium, copper, iron, magnesium, manganese, phosphorous, potassium, sodium, and zinc. Other healthful substances found in jalapeno chilies include phytonutrients: carotene A, Carotene B, lutein-zeaxanthin, and cryptoxanthin B.  Present also are carbohydrates and protein.

Jalapeno peppers have a wide range of health benefits. For example, the capsaicin in the chili is a catalyst in burning fat in the body, making it ideal for those who are on a weight loss diet. The antioxidant present in vitamin C is instrumental in healing both mouth and stomach ulcers. The vitamins, minerals, and amino acids found in jalapenos enhance the function of the nervous system, inhibiting the development of neurological maladies like Alzheimer’s and Parkinson’s diseases.

Other health benefits found in jalapeno peppers include the treatment of arthritis. Studies have shown that the capsaicin in jalapeno chilies reduces inflammation, decreases pain in joints, and lowers symptoms of arthritis. The pepper is also instrumental in cardiovascular health: the presence of vitamins C and A and bioflavonoids strengthens the cell walls of the vascular system and regulates blood pressure. This, added to the capsaicin, reduces the bad cholesterol and makes it an ideal food to prevent heart attacks and strokes.

Jalapeno peppers are easily grown and seeds saved from previous growth are excellent. In colder climates, start plants from seed indoors about eight weeks before the last frost. Each seed should be planted one-quarter inch deep in well-draining soil that maintains a temperature of eighty to eighty-five degrees Fahrenheit to allow them to germinate. Place the flats or pots in a sunny spot in the house, preferably in a window with southern exposure or use a grow light. They can be planted outdoors two to three weeks after the last frost when the night temperature is no less than sixty degrees. Transplant the seedlings outside in the garden twelve to twenty-four inches apart in rows twenty-four to thirty-six inches apart or fourteen to sixteen inches apart in raised beds. Plant in soil that has not been used for tomatoes or potatoes, in a location that receives full sunlight, and drains well. The peppers will turn green as they mature and can be harvested once they are a deep, dark green or when ripe and have turned red. Use scissors to snip the chili from the stem as removing them by hand may cause damage to the plant.

How to Eat Jalapeno Peppers

Jalapeno peppers lend themselves to many recipes and add a unique flavor to dishes. They can be pickled, stuffed, or roasted and they can be diced as an ingredient in salsa. Fresh jalapeno chilies can be minced and used in pico de gallo. Jalapeno chilies that are dried and smoked are called chipotle and pickled; they are used as a condiment in drinks and recipes where heat is needed.