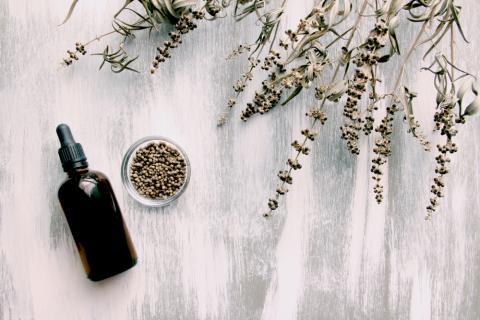 When PMS comes around to visit, most women grab ibuprofen to relieve menstrual cramps, headaches, and other nasty side effects that occur near their menstrual cycle. While these over-the-counter pharmaceuticals can alleviate the pain, they often come with less-than-pleasant side effects, particularly when used long term. Rather than look for cures, why not try to prevent the symptoms from happening in the first place? Prepare to take a look at chasteberry, or vitex, a powerhouse supplement that is a staple in women’s health.

What is chasteberry (or vitex)?

Vitex, also known as chasteberry, comes from the fruit of a chaste tree. Related to mint, chasteberry originates from the Mediterranean region and parts of Asia. While its name was originally given thanks to the belief that it helped maintain chastity, the herb is now more commonly used to help with irregular menstrual cycles and symptoms. Look for tall trees with bright green leaves and showy, lilac-colored flowers—not unlike lilacs themselves.

What does  chasteberry do?

Chasteberry was originally used to decrease sexual desire, but this use has since been debunked. Instead, vitex is useful for lessening the severity of menstrual symptoms, particularly around PMS.

Unlike pharmaceuticals, vitex isn’t a one-and-done sort of herb. In fact, in order to notice results, it might be necessary to take the herb for several months. Several studies, like this one and this one, have demonstrated the effectiveness of the herb, especially for helping with premenstrual symptoms, like cramps, depression, bloating, and irritability. This is thanks to chasteberry’s ability to normalize the ratio of progesterone to estrogen, as the functional medicine clinic Whole Health Chicago explains. Additionally, women who consistently take chasteberry may notice a decrease in breast tenderness around their cycles. Women who suffer from endometriosis, in which cells of the uterine lining travel outside the uterus to other areas of the body, may notice a significant decrease in pain symptoms when vitex is taken for several months in a row.

For women looking to conceive, vitex is often used to increase fertility, particularly for women with short luteal phases.

How do I take chasteberry?

Vitex is most commonly found as a capsule, either by itself or with a blend of herbs that can be helpful for women experiencing painful menstrual symptoms. I’ve found great success with this supplement (bonus: it also contains hormone-balances like maca and black cohosh) but most natural food grocers and functional medicine practitioners can provide recommendations.

Unlike pharmaceuticals, chasteberry isn’t a one-and-done sort of herb. In fact, in order to notice results, it might be necessary to take the herb for several months.

How effective is chasteberry?

While vitex has been prescribed to those suffering from menopausal symptoms, studies have not yet proved the success of this. However, two surveys that included more than 1,500 women taking vitex for several months up to 16 years reported a 92% effectiveness rate.

While chasteberry isn’t a cure-all, it is a safe and effective way to decrease menstrual symptoms, increase fertility, and restore cycles after coming off of the birth control pill and other hormone contraceptives.