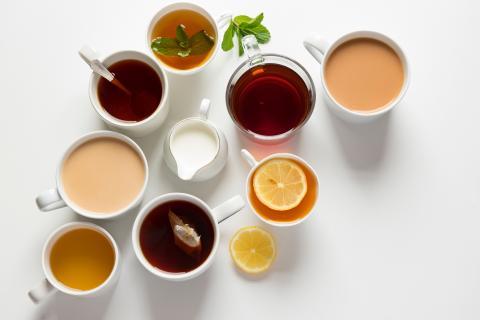 Teas might feel more like a winter drink—something to cozy up with on a cold night, or wake up to on a crisp morning—but they’re just as good in spring as in winter, and sometimes even more beneficial. After several months of less sunshine, less time spent outdoors, and too many tuber and starch-heavy meals, our bodies are likely craving bitter tonics to cleanse ourselves and aid in digestion. Spring teas are often the perfect choice for this, and they offer a wide variety of benefits outside of simply being tasty and comforting.

Before we look at spring teas, it’s important to distinguish between tea and tisane. Herbal teas aren’t actually teas at all, but tisanes. Traditional teas, like green, black, oolong, white, and pu-erh, actually all come from the same plant, called Camellia sinensis. This evergreen originates in Eastern Asia, hence the popularity of the tea culture in Japan and China. Herbal teas, or tisanes, don’t come from the tea plant, and instead are simply a variety of dried herbs, flowers, and fruits that are poured into boiling water, then strained. While spring teas from the tea plants are highly sought after thanks to their delicacy of flavor, this article is going to focus on herbal teas, divided by their benefits.

Spring cleaning isn’t only for a crowded basement or unruly closet. Cleansing your body is best done in the spring, following the earth’s natural cycle. While I can’t advise you to follow a detox plan (that’s best saved for professional opinion), detox teas are a healthy and easy option for spring cleansing without energy-zapping side effects.

Dandelion is, in many ways, symbolic of spring. Remember plucking the sticky yellow flowers as a child? A natural diuretic, dandelion helps the liver eliminate toxins, perhaps obvious if you’ve ever tasted the bitter, toothy green leaves of the plant. While you can make your own tea from foraged dandelion, for ease and convenience I recommend picking up one like this.

Burdock root is often found in coffee substitutes, thanks to its bitter, roasted aroma. Originally used as a blood purifier, burdock has been shown to improve eczema, cancer, diabetes, and AIDS, in addition to having anti-inflammatory effects. While you can find pure burdock root, I enjoy it mixed with other herbs, like dandelion above.

If you’ve ever weeded your garden or wandered along an overgrown trail, you’ve probably had the misfortune of stabbing yourself on one of these. Milk thistle has been used as detoxifier for hundreds of years, and continues to remain so thanks to its medicinal properties. While scientific studies show less effect than anecdotal evidence, the science is clear that milk thistle has powerful detoxifying properties and can be particularly helpful for helping those with liver disease, or cirrhosis.

It might come as a surprise that drinking herbal teas can actually help strengthen your bones, but it’s true, thanks to their mineral-dense qualities.

You’ve probably been told to avoid stinging nettle, but in this case, the plant is beneficial. Stinging nettle grows profusely in springtime, and is covered in short, prickly hairs that can result in rashes if touched. You can harvest your own stinging nettle, granted you wear gloves and boil the nettles to remove the stingers, but dried nettle can be found at most health food stores or, conveniently, already prepackaged as tea. Nettle doesn’t have a bitter taste like some of the herbs mentioned, but it does taste earthy. As such, I find it comforting throughout the day and look forward to drinking it. Sip knowing you’re getting a good source of calcium, magnesium, boron, silica, and even vitamins C, D, and K.

Of all teas, alfalfa is one of my favorites. This bright green herb is the same alfalfa you might feed a horse or rabbit, and is a rich source of vitamins C, D, B, and E. It is often used to help those suffering from arthritis or rheumatism. The entire plant is used when making this tea, but it’s far easier to purchase it in bulk at a local health food store. Expect a clean, grassy taste that pairs well for mild spring weather—especially since it also helps those suffering from springtime allergies.

Red clover is a perennial herb that most grazing animals find delicious; so do most humans. Luckily, this small, flowery plant comes with a lot of nutrients, including calcium, magnesium, and vitamin C. Additionally, several studies have demonstrated that clover can prevent bone loss, be used as a cough remedy to help sore throats, and even reduce hot flashes in menopausal women.

All of the teas above can be indulged in on their own or combined together to make a delicious spring tea with both cleansing and strengthening properties—perfect for spring.

What are your favorite spring teas? Let us know in the comments below!