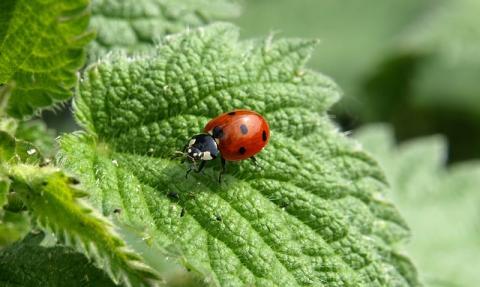 Stinging Nettle Leaf sounds a little scary, but never fear — all it wants to do is take care of you. Here is why you need this all-purpose herb in your life.

Nettle Leaf has been used for centuries as a healing tonic as well as a spiritual talisman . Back in the olden days, if you suspected your house was cursed, you would sprinkle nettle leaves around the perimeter to clear out the evil energies. Nettles were also consumed as a vegetable. They were steamed with lemon and olive oil, much like you would prepare spinach. The most important thing about nettle leaf, however, is its ability to heal. Here are 5 benefits of Nettle Leaf:

So nettle leaf contains a very special ingredient called Silica. Silica is a master at rebuilding joints, growing strong hair and improving your skin’s elasticity. It’s pretty much the fountain of youth. Drinking a cup of nettle leaf tea each day can smooth out your skin’s appearance and even harden brittle nails.

In a study conducted by the National College of Naturopathic Medicine, freeze-dried nettle leaf was found to have a positive effect on symptoms of asthma, hay fever, seasonal allergies and hives, versus the placebo. It might be worth taking in a little nettle leaf each day to breathe a little easier.

Nettle leaf is known to be a diuretic, dissolving kidney stones and eliminating uric acid from the joints. In an open clinical trial, nettle leaf was tested against a non-steroidal anti-inflammatory drug and demonstrated a similar reduction in pain and immobility, without any negative side effects. If you suffer from kidney stones, it might be worth incorporating some nettle leaf into your supplement routine

Women everywhere are being diagnosed with anemia or “low iron.” The great thing about nettle leaf is that it provides a highly absorbable form of iron when steeped as a tea. When you look at the tea it’s a deep green, almost black color -- you just know there’s lots of iron in there. Nettle leaf also contains vitamin C which aids in the absorption of the iron. It’s like a two-in-one! For severe anemia, try 2 cups of nettle leaf tea along with your prescribed iron supplements.

I’m sure you weren’t expecting this one, but nettle leaf can greatly reduce nose bleeds if you are prone to them. Nettle leaf is rich in vitamin K, which guards against excessive bleeding. This makes it a great addition for someone who bleeds easily and is especially useful during menstruation.