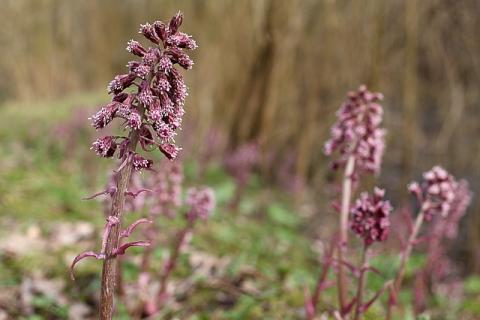 With the season of spring comes new life and beautiful growth! The allergies that can come with the season, on the other hand, are not so beautiful. People often experience such issues as runny nose, sneezing, coughing, and wheezing. Most conventional allergy medicine today can cause unwanted side effects. Thankfully there are herbs out there for just about anything that ails you, including seasonal allergies. Finding the right ones is key to alleviating those symptoms that can cause you discomfort and misery. To help you out, check these 9 awesome herbs to help you alleviate some of those seasonal allergy symptoms.

The leaves of this perennial herb are said to be potent and effective in relieving most seasonal allergy symptoms, but this herb can be toxic if not used the right way. It is recommended that you seek advice from a certified herbalist before using butterbur. The herb has been used to alleviate such allergy symptoms as migraines, headaches, coughing, and wheezing. The most popular way to use butterbur is by taking butterbur capsules.

Although the leaves can cause quite a sting, this herbaceous perennial flowering plant has been used medicinally for centuries. The herb’s uses include relieving such allergy symptoms as sinus inflammation, nose bleeds, and other respiratory issues. Stinging nettle is usually made into a tea or tincture, or taken in capsule form when used medicinally.

When consumed raw, in capsule or in tea, garlic cloves have been said to be great for relieving or preventing hay fever. This perennial herb is also used for boosting the immune system and assisting in bringing down inflammation, which are some typical symptoms of seasonal allergies.

Gingko comes from the Maidenhair tree, and has been used medically throughout history for thousands of years. It is considered to be one of the most top selling herbs in America, and it is often used to help manage seasonal allergies. Capsules and tea are a few ways to ingest this particular herb.

I would probably consider this a perennial flowering herb as one of my favorites for preventing allergies. Alfalfa is known for giving the immune system a good kick-start, which is much needed during allergy season. It is also said to help with soothing mucus membranes that have been irritated by allergens. People often make tea, encapsulate, or sprout alfalfa for medicine.

Sea Grape is not actually a grape, but a traditional Chinese medicine herb that is said to have been used for more than 5,000 years. The fruit and stems of this herb are usually eaten raw for medicinal purposes, and they have an insipid and bitter flavor. Sea grape is used to remedy allergy symptoms like congestion as well as spasms of the bronchial tubes.

Although some people are turned off by its taste, I love the sweet-bitter flavor of licorice root. The herbaceous perennial legume is used to bring down inflammation brought on by seasonal allergies. This herb can be taken as a tincture, tea, or in capsule form, and some even prefer to just chew on licorice root sticks.

The spicy, intense root herb is another seasonal allergy remedy that’s known to be most effective when consumed raw. I have a friend who keeps raw pickled ginger pieces at hand for allergy season. When she or her family starts to feel symptoms, they suck on the ginger pieces throughout the day. It is said to help relieve sniffling, sneezing, itching and red eyes. A few ways to gain some of the benefits of raw ginger are juicing, making ginger tea, tossing it in with various foods, or even cutting it into pieces and packing it into capsules.

Turmeric is an amazing rhizomatous herbaceous perennial plant from the ginger family. This gold-yellow herb has been said to aid in relieving respiratory allergy symptoms and naturally building up the immune system. Like most herbs, turmeric is known to work best medicinally when taken internally, raw, and regularly. If you’re curious about some ways to consume this herb, here are 5 ways to eat turmeric.

Many people are affected by seasonal allergies, and usually symptoms can occur in different ways. Explore different herbal remedies and options for allergies, so you don’t have to feel backed into the corner of conventional medicine. For more information on how to holistically handle seasonal allergies, check out this article.