Huitlacoche: A Rich Source Of Nutrients Since Aztec Times 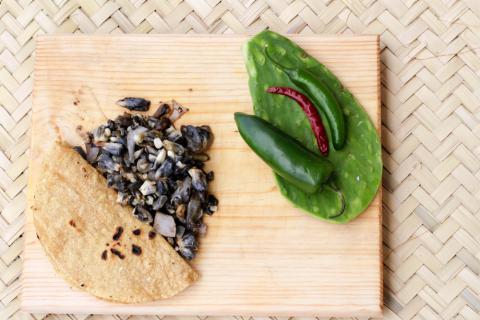 Mexican food is popular all over the world, but unfortunately, some people think it consists solely of tacos. While it’s true that tacos are popular in the country and are available almost everywhere, Mexican food consists of various dishes and ingredients that are beneficial to our health. Aztec and other indigenous traditions still influence the country’s modern cuisine, and one ingredient that is still important in Mexico and is growing in popularity worldwide is the earthy corn fungus known as huitlacoche. In English it’s known as “corn smut” or “devil’s corn,” and it’s delicious!

Huitlacoche actually comes from a fungus called Ustilago maydis that grows on a plant’s ovaries and keeps it from growing the way it should. When the fungus grows on corn it causes the kernels to grow in abnormally large sizes, eventually making kernels grow longer than they should. Considered an infection in countries like the United States, huitlacoche is a Mexican delicacy that is often added to quesadillas, used as a side dish, or used as a topping in other Mexican dishes such as huarache (a formation of dough that is shaped like an oval, fried, topped with beans, other ingredients of choice, and queso fresco).

Many foreigners often have their doubts when deciding to try huitlacoche for the first time. After all, it is a fungus and it doesn’t quite look aesthetically pleasing. It’s also hard to find fresh in the United States or other countries and is probably best tried locally. If you’re lucky you may live in a part of the world that has Mexican restaurants that serve dishes featuring huitlacoche as the main ingredient.

Is huitlacoche a mushroom?

Most people refer to huitlacoche as a mushroom because it’s easier to explain its formation this way. Though this ingredient is the product of a fungus, it’s really part corn and part mushroom, and some people consider it a truffle. The latter explanation is also inaccurate.

Did Aztecs use huitlacoche?

Huitlacoche has been used in Mexico since the Aztec era. Its name stems from Nahuatl and although the roots of the name are a source of debate, it is widely accepted that its translation roughly means “raven excrement.” Ancient Aztecs bestowed the mushroom with special characteristics and even thought it was an aphrodisiac.

The fungus actually comes into contact with corn, changes its metabolic patterns, and actually makes the corn healthier thanks to these changes. This makes huitlacoche a rich source of protein, unsaturated fatty acids, and lysine.

Lysine is an amino acid that promotes healthier and stronger bones and boosts the body’s ability to ward off infections. This amino acid can also improve the skin’s appearance. Body builders and people who do intense strength training often ingest lysine to replenish their muscles. Adding huitlacoche to your diet will also ensure you obtain the beta-glucans contained in the “mushroom.” Best of all, beta-glucans are instrumental in decreasing cholesterol.

How To Find Huitlacoche

Though the ingredient is more easily found in Mexico, U.S. farmers are starting to get savvy about the demand for huitlacoche. If you’re lucky enough to live in a place where you can find locally-sourced huitlacoche and decide to buy it fresh, make sure your huitlacoche is a bluish color and feels firm to the touch, but not too hard. It should turn your fingers black when you touch it. If you can’t find fresh huitlacoche, you might be able to find it canned. Simply strain the “mushrooms” over a sink and pat them dry before use.

How To Store Huitlacoche

Huitlacoche is known for spoiling quickly. As such, it’s best used right after purchase. If you can’t use them right away you can wash and freeze them. This way they’ll be clean and ready for you to use once you get the opportunity.

You can use huitlacoche in many dishes, but it’s a popular quesadilla filling. This is the easiest way to prepare it if you’re lucky enough to have some of these mushrooms on you.

1. Heat a pan and pour in the oil. Add the onion and garlic to the pan when it is sufficiently hot. (If you are using serrano pepper, make sure to remove the seeds, finely julienne it, and throw it into the pan as well. You can also add the corn at this time.)

2. If you have access to a griddle, start to heat your tortilla. You can use a pan and nonstick cooking spray to heat the tortilla if you don’t have a griddle.

3. Add the huitlacoche to the onion and garlic mixture and wait until it changes color.

4. Once the filling is ready, remove the tortilla from the griddle or pan, add the filling, and add the shredded cheese. It should melt as soon as it comes into contact with the other ingredients.