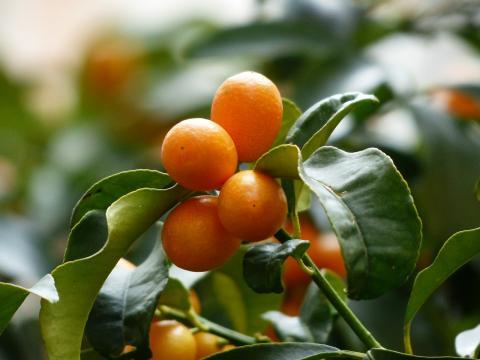 Kumquats are a member of the family Rutaceae, commonly known as the Rue family of the genus ortunella Swingle, also known as kumquat P., which contains four species. The plant has its origin in China and was described in Chinese literature in 1178 C.E. The name is derived from the Chinese language meaning “gold orange.” It was brought to the attention of Europeans by a Portuguese missionary in 1646 and by 1716 was established in Japan. Kumquats did not arrive in Europe and the Americas until the 19th century. In North America, it was cultivated as a decorative plant—potted for indoors or patio accents or an addition to landscape décor. They grow in Texas, Florida, and California and can be found in the Caribbean, Central and South America with limited cultivation in Africa and Australia. They only grow in the high altitudes of India. They are available in markets from October to June and are considered a winter fruit. Kumquats are rich in vitamins, minerals, and other nutrients and are the only citrus fruit that can be eaten whole as a snack. They are a versatile food that makes an excellent addition to many recipes.

Kumquats are the fruit of the kumquat tree, a slow-growing shrub reaching the height of eight to ten feet that blooms fragrant white flowers. The fruit can be round or oblong, depending on the species, and matures to approximately one-and-one-half inches in width. The peel can be golden-yellow or red-orange in color; its outer layer is spicy with a sweet inner layer. There is a small amount of pulp that is divided into three to six segments with a meager amount of juice. The seeds are tiny, pointed in shape, and have a green inner pulp. There are four species, one of which includes the Hong Kong Wild (F. Hindsii Swing) which ripens to orange or scarlet in color. The 'Marumi' or Round Kumquat (F. japonica Swing, syn. Citrus maduremis Lour.) has a smooth, golden peel and is very aromatic. The 'Meiwa' or Large Round Kumquat (F. crassifolia Swing.) can be short and oblong or round in shape with an orange-yellow peel and a thick, sweet pulp. 'Nagami' or Oval, Kumquat (F. margarita Swing.) bears oblong fruit and is the most cultivated in North America.

1. Kumquats can be used in many ways. They are an excellent snack that can be eaten like grapes. They can be preserved in sugar or canned and are often served as dessert items in Chinese restaurants. They lend themselves to being candied and make a delicious marmalade. They can be pickled, used in sauces, or as an ingredient in salads and other recipes.

2. Nutritionally, kumquats contain many varieties of essential oils that include but are not limited to limonene, alpha-pinene, and monoterpenes. They are rich in fiber and contain beneficial fats, as well as vitamins C, E, and A. The fruit also contains potassium and calcium.

3. Kumquats are beneficial to the immune system because of their antioxidants and high vitamin C content—helping to protect the body from colds, flu, and infection. Kumquats also reduce the risk of developing cancer because they are rich in phytonutrient flavonoids like carotene, tannin, zeaxanthin, pectin. These substances reduce the amount of free radicals in the body caused by oxidative stress that damage cell DNA, a factor in the conversion of healthy cells to malignant cells.

4. For a healthy cardiovascular system kumquats are effective in lowering cholesterol and triglyceride levels in the blood, resulting in the increase of blood flow to the nervous system and reducing the risk of stroke or heart attack. The presence of potassium increases the body’s fluid levels, balancing blood pressure and heart rate. It is a factor in the production of blood and the formation of red blood corpuscles.

5. Kumquats reduce the risk of developing diabetes, it is a factor in reducing inflammation, and slows the aging process. It also is beneficial to oral and skeletal health and increases energy. This nutrient rich fruit provides the essential substances that contribute to these positive results.

Native to China, this versatile fruit can be found throughout the world. It is used in many recipes that include sauces and side dishes, and it makes a great snack. Its rich nutrient content helps to keep the body well-balanced and functioning and prevents many diseases. It is a true superfood.