'Tis The Season For Citrus 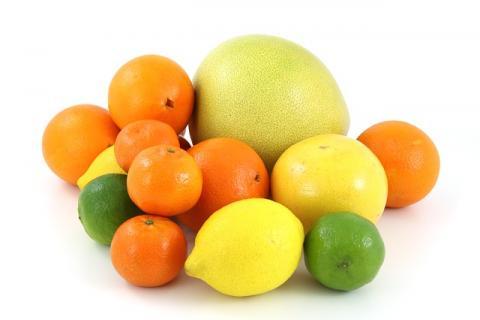 It's the dead of winter, and we're in prime citrus season. The bounty of juice-filled vitamin C fruits couldn't come at a better time. When most of us are warding off colds and searching for an immunity boost, citrus is ripe for the picking.

With so many different species and varieties of citrus, it can get confusing very fast. There were originally four types of citrus fruits – pomelo, mandarin, citron, and papeda - but hybrids from cross breeding have resulted in a long list of citrus fruits. The following varieties are how you can tell your citrus apart.

Oranges are one of the most readily recognized forms of citrus, mostly noticed by their obviously orange-colored skin. Sweet in flavor and bursting with juice, there are several types of varieties that fall under this category. Valencia, blood orange, cara cara, and navel oranges range in size, color, flavor, and thickness of skin. Blood oranges are easily defined by their deep purplish-red flesh. Navel oranges stand out with their belly button appearance and sweet taste, while cara cara are a variety with a salmon-colored flesh, and Valencias are often used for juice. Containing over 170 phytonutrients, oranges are loaded with vitamin C, fiber, and potassium. Popular as a quick snack, salad addition, juice sweetener, or cocktail mixer, oranges represent the very essence of citrus.

Native to Southeast Asia, mandarins are the second most common citrus around the world. Mandarins tend to be smaller than oranges, and sweeter in flavor. And like oranges, there are several varieties that fall under this category. Clementines are distinguished by their thin skin, which is a deep orange-red. They are sweet and aromatic, whereas kishus are sweet and seedless. The pale orange satsuma can be harvested early on in September and are symbols of good luck in Japan. And the beloved tangerine has a darker skin and received its name as an export of Tangier. All mandarins are easier to peel than oranges, thanks to their thin skin.

The word citron itself is derived from the Latin word citrus. Thick pith, lumpy, and sour, citrons look like very odd lemons. Their peels are fragrant and often candied. It is in fact the zest that is sought after since the pulp contains very little juice. They fall under two varieties determined by shape, one being oblong and the other having a fingerlike shape. The oddest of the varieties, Buddha's hand, has octopus-like offshoots that break the norm of a round- or oblong-shaped citrus. The normal, or round-shaped, varieties have either a sour or acid-less pulp.

Thin green rinds and matching pulp, limes are a widely used zesty addition to Mexican, Thai, and Vietnamese cuisine. There are two categories, the sweet and the acidic. The kaffir lime used in Asian and Indian cooking is typically used for zest. The key lime, once popularly grown in the Keys in Florida, has a higher acid content, tends to be more yellow than most limes, and is used for its juice.

Like limes, lemons are also determined as either acidic or sweet. The yellow peel can range in thickness across varieties, as well as the amount of juice. The popular Meyer variety is a lemon-orange hybrid, imposing a sweeter flavor than most other lemons. Eurekas are commonly sold at the grocery store and are noticeable due to a short neck. Lisbons are another popular variety sold at the market, but they do not have a neck like the Eurekas and they tend to have smoother skin. Another variety sold at stores, Bearss, are full of juice and are on the sour side.

A cross between a pomelo and an orange, grapefruit varieties are determined by their flesh - white, red, and pink. Grapefruits are the second most harvested citrus in Florida. The pink grapefruit has a mild tang; the red is somewhat bitter and gets its color from the lycopene it contains; and the white is the least sweet. The popular Ruby Red is prized for its juice, along with the Duncan variety. The Duncan is actually the oldest variety grown in Florida. Grapefruit varieties have a growing season of November-May.

With soft, thick skin, and very juicy insides, pomelos – or pummelos - are an ancient fruit that are native to Southeast Asia. They are very large in size, and their color ranges from green to yellow. In comparison to the grapefruit, they are sweeter and milder in bitterness. The flesh ranges in color from pale yellow to bright red. Their season in Florida is December to April.

With so many fun citrus varieties in season, it's hard to get bored with cooking. When picking out your citrus for recipes, you want to choose the heavier ones. This is a sign of a juicier fruit. Also, citrus can keep up to a month with refrigeration, and two weeks without.