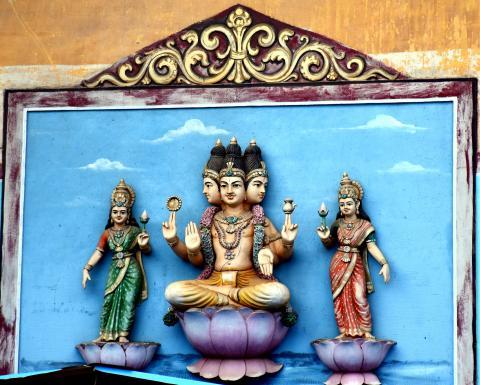 On several different journeys, I spent weeks in the small Northwestern desert town of Pushkar, India, melting into the deeply spiritual and mystical feeling of the place. I learned while visiting that one of the only “living” Brahma temples exists there, next to the small, beautiful reflective lake sitting as the focal point of the entire village.

Pushkar is one of the few designated “holy” cities in India, where certain aspects of “normal” life are restricted, such as cars and other motor vehicles, alcohol, and meat. Instead, visitors and residents treat the small city like a constant religious ceremony and as it was, daily rituals were and are performed at the lip of the lake while tourists and pilgrims alike wander the dusty streets surrounding the still waters, making offerings and bathing in the lake. Bhang (a drink made from Cannabis) is also offered as a regular beverage in the city, which supports the consciousness sought while visiting there.

Perhaps the least celebrated and most unfamiliar deity in the Hindu pantheon is Brahma, Lord of Creation. Usually seen in a trifecta along with Lord Shiva (God of Destruction), and Lord Vishnu (Lord of Preservation), Brahma represents the impetus of Creation itself, the original OM, the actual embryo from which the universe itself is created, known in Sanskrit as Hiranya Garbha (The Golden Embryo).

As I go through the process of reflecting on how each of the Hindu deity archetypes speaks to an aspect of the self, I am in awe to realize how much disconnect there seems to be—in the world at large—to that which Brahma symbolizes, which I interpret to be core of existence itself and the “original,” prime-creative impulse.

In the stories, one day to Brahma is the equivalent of over 4 billion days to us. So it makes sense to the rational mind that that “original” piecing together of the fabric of creation, the initial architecture laid down through the hands of the vibratory consciousness named “Brahma,” is largely forgotten at this stage of the incarnation cycles. What is even more interesting to me is that Brahma is usually depicted with four heads, representing not only the four directions and the four Vedas, but the four Yugas, or epochs of time—of which we are at the final stage now of the fourth yuga (known as the Kali Yuga).

So, if Brahma represents the original and “first” creative impulse of the Allness, desiring to experience itself as the many, in the forms we now experience, perhaps we are becoming aware, yet again, of this aspect of Self because it is nearing time, once again—to newly create.

When I ponder the potency of invoking Brahma, with the awareness I now have of him, it becomes clear to me why his image has all but dissolved from the practices of worship and recognition throughout the ages. It is like once creation has been sparked into life, the other aspects of the trinity (Vishnu, the preserver, and Shiva, the destroyer/recycler) come into play. Their influence acts on through the various phases of the four Yugas and are in fact the only two of the original three needed until the four-stages of cycles complete—hence the “one day of Brahma” understanding. Wouldn’t it make sense that Brahma, as the “impetus of it all,” the “original thought” would not have a job for a while, but instead turn the “responsibility” of perpetual creation over to Shiva—who is expert in the art of death, destruction, and reincarnation—and then to Vishnu to sustain the dream—in all its stages? Brahma is once again being called forth in our awareness perhaps because we, as a collective representation of consciousness, are ready to create anew again.

Here we are, at the end of an epoch. And not even just one of them, but a complete cycle of four main Yugas: the Satya Yuga (age of truth), Treta Yuga, Dwapara Yuga, and Kali Yuga. In this very time period, we are experiencing what is known as the “end” of Brahma’s day. And so, wouldn’t it make sense, as we become more and more aware of the creator beings we are, that we would begin to access the core of our manifestation abilities as architects of creation as well? So not only are we able to take the existing creation and move the parts around in order to meet the desires of our hearts and the inspirations in our spirits (as with the aspect of Shiva), but we can now instead, or again, begin to harness the potency of knowing the Self to be the Source Power from which (and through which) new creation springs—Brahma.

Now that we have the general idea of what Brahma represents within our beings, I find it necessary to delve a little deeper into the tales of him, in order to gain further clarity on what other elements this creative impulse contains. In many creation stories of Brahma, he springs from the Navel of Vishnu—who is the preserver of the universe, long surrendered into one eternal yoga nidra. Yoga nidra is a state of mind which is lucidly dream-like…and so it seems that from an empowerment state(3rd chakra) of a lucid dream did Brahma spring forth and cause new creation to be formed. Sounds a lot like now, in the portion of time/space we are currently living. Does it not?

It is interesting to note that in one of the original stories of how the Brahma temple in Pushkar came to be, Lord Brahma was chasing a demon who was killing children and harassing people, and he slew the demon with his lotus blossom, whose pieces fell to earth and created the lake in Pushkar. After this occurrence, Brahma decided to perform yagya (fire ceremony) at the lake in order to protect it from the demons. Awaiting his wife, Saraswati (Goddess of Music and Art, and also an independent woman), who was late due to rounding up her other goddess sisters—such as Lakshmi and Parvati—Brahma got impatient for the ceremony to begin and so quickly married a local woman, Gayatri, to help him with the yagya.

When Saraswati finally arrived, she was more than a little perturbed to see another woman sitting in her seat, and therefore put a curse on her husband and on all the male gods present (including Brahma, Indra, Shiva, Vishnu, and the fire god Agni). These curses were muted by Gayatri who was already involved in the ritual and had gained blessings and clarity from such. Following the ceremony, besides making amends, each of Brahma’s two wives got a temple around the lake—Saraswati’s sits at the western slope, at the highest point, overlooking the lake, and Gayatri’s is at the opposite end, in the lower, more humble position.

I can’t help but look at this story and see some significance in who Brahma might be—in each one of us—and who his two consorts could represent. For when we are invoking Brahma, it may be important to note two opposite feminine components at his side: the more independent, “fashionably late” goddess archetype and the more obedient, submissive, though still empowered feminine essence. Brahma himself was obviously extremely caring and protective in this story, as he was saving innocent children and people, so his awareness was high, just a bit impatient. He saw the lesser offense to be the addition of more feminine energy to the already potent fire ritual at hand.

When I imagine invoking the original cause of creation, with all of its facets intact, images of what Oneness might feel like burst forth in my consciousness—a gathering of all people, all lands, all sects, all casts, all aspects of self, within. There is an erasing of separation and a reignition of the remembrance that there is really only One of us here. To Brahma, in the story, the additional wife is really more a depiction of inclusivity, of non-judgment, of a lack of the dividing lines between you and I or between the various aspects of the feminine which are sure to both exist within a person, no matter “how evolved” you are. The feeling of “everyone gets a seat around this meal” is prominent and the title of “holy” gets reinstated and refreshed in the infinite drawing room of “what’s next.”

A clue is offered, as well, as to when we might “see” this aspect of creation arise again—when men begin to take action against the killing of innocent children and the harassing of humanity. This, I believe has recently come to be, with the awareness and standing out against the pedophilia rings recently coming up in the news, as well as a fascination with the equality of all lives—a true indicator that Brahma is returning to his station in our consciousness.

So what is next? The gathering of the goddesses—all of them. A voicing of the grievances done to the women by the men—as did Saraswati at her arrival at the yagya—and a re-wording of the curses, a reducing of the hardships applied—by the empowered goddess self. With the return of the goddesses, the empowered sisters in this time, a sense of equality is returning to where the masculine and feminine within can again create—from a sense of newness.

There is another story of Brahma which fascinates me, and is worth the mention in this analysis. The tale begins when there was nothing but the Oneness, of which Brahma represents. He then decides to divide himself up for the experience of joy, and splits into his masculine and feminine aspects, revealing his consort, Saraswati—the artistic, musical representation of creation. She tries to “hide” from him, and he produces a head in each of the four directions, “looking for her.” Shiva sees Brahma “chasing” after Saraswati and questions this whole scene, interpreting the manifestation of Saraswati as being more of Brahma’s daughter, since he saw her “spring” from him. Feeling it was not appropriate for Brahma to be chasing his perceived daughter, and watching Brahma sprout another head in the upward direction to find Saraswati, Shiva cuts off his fifth head and curses Brahma to never be acknowledged as a god.

This story is interesting to me, as Brahma is truly unrecognized, worldwide and even in the Hindu tradition. Following this tale, it is thought that Saraswati went on to become more of an independent “loner” goddess, and stopped associating herself as Brahma’s consort. This is funny because if the creation myth is speaking to the truth of things, She is but the other half of He. Neither can be whole without the other. So in re-invoking Brahma in our being, and choosing instead to honor the wholeness of ourselves, we would be re-marrying the masculine and feminine creation parts back together, and pulling all directions back into the heart—back into One. Art and music would no longer exist as separate entities to the masculine, logical mind. The two hemispheres of the brain would unite into one faculty as we remembered ourselves prior to the interception of reincarnation and cyclical living (as represented by Shiva’s intervention).

In this moment, I am asking the Brahma within me to come forth, that original architect of creation, who knows what wholeness feels like, who recognizes the beauty and cherished gift of bringing desire into form for joy. I call forth the part of me who knows nothing to be separate from myself, who remembers Oneness and integrates that awareness everywhere I go. I call on the part of me who is ready to create anew, from a space of clarity and freshness, who is ready to let go of the old creations and trust the impulse within to start again.