Yoga Nidra: Beyond Healing to Transcendence 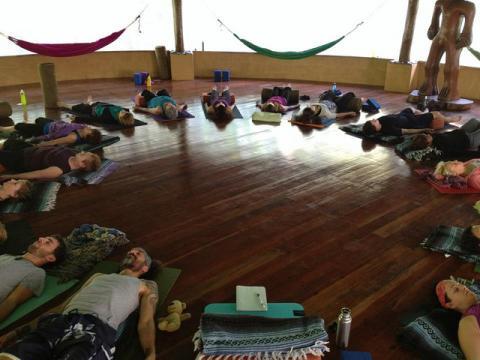 The ancient Tantric science of yoga nidra is an incredibly simple way to access healing as well as deeper states of awareness not normally known by many.  By practicing the “yoga of conscious sleep” the dream realm can be more easily accessed and eventually mastered. Yoga nidra also aids in uniting both hemispheres of the brain for everyday harmony and evolutionary bliss. Yoga nidra is key in not only assisting with deep subconscious healing, but in going beyond it to a state of transcendence.  Here's how...

What is Yoga Nidra?

First of all, what is this ancient Tantric art?

Where did it come from and what does it do?

Yoga Nidra's known origin begins with a story in India where a young boy repeatedly fell asleep while “standing guard” outside of an ashram. On occasion after occasion he surprised his parents and guru by having subconsciously memorized a myriad of ancient texts and mantras while asleep, for that was the only explanation. Swami Sivananda was the one who put a term to this practice and began formulating it for study and regular usage, though the science has been known to yogis for thousands of years.

One of the main goals of practicing yoga nidra is to acquire what is termed turiya – which is both the  union and an awareness of the conscious mind with the sub- and unconscious minds – that is, being aware of the conscious, subconscious and unconscious minds simultaneously. The yoga nidra state -- which consists of entering alpha brainwave states -- is achieved through an engaging with, and then a withdrawal of the senses, known as pratyahara. Turiya is only realized after consistent practice and intention coupled with a pure heart.

In yoga nidra the practitioner is led to go within and follow certain instructions during a guided meditation where gradually and systematically the entire body is relaxed by first relaxing the gray areas of the brain. This relaxation of the brain is done through what is called a “rotation of body-consciousness” where the guide speaks the name of various body parts in a rapid manner and the one practicing is following along, bringing fluid consciousness to each area mentioned, one at a time.

Over the process of nine steps, which make up the practice of yoga nidra, the guide leads the meditator into an alpha-brainwave state. Prior to reaching turiya, which is an advanced state of consciousness, various levels and layers of healing can be known, as can progressively deeper dream engagements, interpretations and lucidity. One who regularly practices yoga nidra can become an expert lucid dreamer without too much additional effort.

The subconscious mind and yoga nidra

The subconscious realm is deep and filled with impressions which dictate conscious expression. These subconscious beliefs and expressions were acquired both during youth as well as passed down through genetics. These impressions make up one's foundation and the majority of the root of all one's actions, attitudes and feelings.

Through practicing yoga nidra, the subconscious is accessed and storehouses of impressions are released from their effects on one's consciousness and actions.

Beyond the subconscious, a collection of beliefs, ideas, programs and societal agreements – filled with  limitations -- are stored in the collective unconscious. While deep in the practice in yoga nidra, unconscious influences are also eased and finally erased so that one might live, not from a place of programming and societal limitations, but from one's pure soul-essence.

Once the practitioner has taken the time to relieve subconscious conditioning, the healing has taken place, but there is more still that yoga nidra can offer. As one learns to navigate the dream realm with the practice of yoga nidra it can be realized that there are stages of dreams and layers to possibility in this realm.

The first stage of dreaming is the release of subconscious impressions, usually in the form of symbols and a piecing together of waking life impressions in various random formats. The second stage of dreaming is the imaginings of the dreamer, fantasies and wishes -- those felt deep in the heart of the one who dreams – showing up in dreamscapes to be explored. This is where concepts such as flying and teleportation might first be encountered. In the third stage of dreaming the dreamer becomes prophetic as the dreams are free to show what fate is preparing. In this state there are no more subconscious filters on the mind and it is free to access “the truth of what is.”

As yoga nidra is practiced, a greater consciousness fills the practitioner so that they are never unaware of the happenings of reality on their minds and hearts. It becomes easy to “sort as you go” the impressions of the day, the energies that come your way and the feelings which rise – choosing to deal with them in the moment rather than sentence them to the subconscious dungeon of the psyche through avoidance and suppression.

The one who practices yoga nidra becomes master of their reality and able to live a more transcendent life full of bliss, joy and greater awareness. Therefore, yoga nidra is not only a tool for healing and rejuvenation, but a pathway to transcendence, ascension and self-realization.

The 9 steps of Yoga Nidra are as follows:

1. Preparation of the space and body – relaxation, settling in

2. Pratyahara – first a filling of and then a withdrawal of the senses – usually through feeling the weight of the body, sounds in the room, noticing the breath, etc., and then moving inward to a more subtle reality

4. Breath awareness – becoming conscious of the breath – feeling the inhale and exhale, counting the breath, etc.

5. Rotation of body consciousness – to relax gray area of brain (mentioned above)

6. Opposite feelings – where focus is

7. Visualization – a rapid series of images to fish out memories in the subconscious mind as well as visualization of a scene or remembrance of the series of events which made up the day – such as “going backwards through time”

9. Coming out of the practice

There are many yoga nidra meditations on the internet. To find a practice that suits you check out the following links or search “yoga nidra” on YouTube.com.

or for more downloadable tracks:

Photo Credit: "Yoga Nidra" by BFTrick is licensed under CC BY 2.0