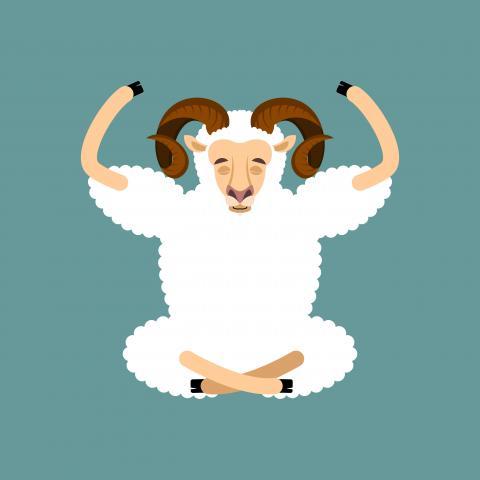 If you haven’t heard about the latest trend of “goat yoga,” you likely will soon. It’s new, but it is catching on quickly. Goat Yyoga was started pretty recently (in August 2016) by Lainey Morse in Willamette Valley, Oregon, and is quickly becoming a trend.

What is goat yoga, you might ask? It’s pretty much exactly what it sounds like—it’s a yoga class with goats! And adorable, snuggly, curious baby goats, at that.

A goat yoga class is run and instructed like a regular yoga class, but with baby goats running around (and possibly sleeping, snuggling, inspecting, and exploring). For example, if a person were to find themselves in a downward-facing dog pose, they might discover a baby goat walking underneath them. Alternatively, if a person was on all fours (tabletop pose) a baby goat might be found leaping up and standing on top of the table-like surface of the person striking this pose. Another common experience is a baby goat sleeping on a yoga mat or snuggled up in the arms or lap of a yoga student during class.

Basically, baby goats are quite curious, and a yoga class is a wonderful new playground for their curious and investigative nature. As for the humans in the class—well, it is just plain fun having adorable, snuggly baby goats around while doing yoga and it is a sweet and healing experience all around.

A Personal Experience With Goat Yoga

I attended a goat yoga class, and it was amazing. Before attending the class, I had mentioned to many people that I was planning on attending and got a lot of funny faces and comments in response to this idea. “Goat yoga?!” most people exclaimed. “What the heck is goat yoga?!” Even when I explained, people mostly shook their heads with a confounded look on their face, likely thinking something along the lines of, “What is the deal with these Boulder hippies?”

Mind you, I have also been known to spend my afternoons in the local Oxygen Bar and participate in many enjoyable activities that a large majority of the world may perceive to be a bit unusual, so I am used to this type of reaction (and am glad to say I am fairly unphased by it). That being said, and having never attended a goat yoga class myself, my only thoughts about the concept were, “I love yoga, and I love baby goats, so, sign me up, whatever it is!” and “Baby goats?! Heck yeah!” As far as I’m concerned, I am on board for anything that involves the opportunity to snuggle baby goats.

As it turned out, it was even better than I had hoped or predicted. The class was held outside on a grassy field at the Vali Soul Sanctuary in Boulder. There was so much cuteness going around, and these baby goats had such a strong healing energy—they instantly transformed everyone’s mood into a happy, blissful, and joyous one.

At different points during the class, everyone would stop what they were doing to see what funny and cute thing a goat might be doing with a yoga student, like jumping on the “table top” position of a yoga practitioner or jumping over the boundary that created our outdoor “yoga pen” and trying to make their escape while an event coordinator would chase after it. At many points during class, baby goats nuzzled their faces to those of the people practicing yoga. One particular baby goat named “Jalapeno” spent the entire class sleeping on my yoga mat.

There were a few times during class where I decided to ditch doing yoga poses and just focused on snuggling with Jalapeno. I was particularly lucky that Jalapeno chose my yoga mat as her resting place, as most baby goats were making their rounds from person to person throughout class. Jalapeno fell asleep in my arms before the class started, and I held her until we really needed to get moving in the class. I gently moved her to my mat for further snoozing when that time came. I think Jalapeno was a bit under the weather, but I was pleased that she found comfort on my mat and in my arms.

When it was Savasana time (corpse pose) at the end of class, instead of lying flat on my back with my arms and legs outstretched, I instead lay on my side and curled myself around Jalapeno and took a sweet and cuddly goat-snuggle for the remainder of the class. When class came to a close, the coordinators of the event announced that we had the option to bottle-feed the baby goats, and all students enthusiastically stuck around for what turned out to be quite an exciting and chaotic adventure.

When I had initially envisioned bottle-feeding these babies, I imagined a serene scene with baby goats gently drinking from the bottle in my arms. As it turned out, my sleeping baby goat buddy Jalapeno woke with a start after snoozing for the entire hour of class when she saw the bottle. She leapt to her feet and immediately began drinking as fast and furiously as she could. Jalapeno was so excited that I had to hold her still so the person who brought the bottle over could feed her—not to mention the two or three other baby goats who were battling to get in on Jalapeno’s bottle. Looking around the fenced-in yoga pen, I saw that it was an all-around feeding frenzy with all of the baby goats sucking down their large bottles of milk in a minute or less! There was nothing calm or serene about this bottle-feeding process, but it was fun and adorable nonetheless.

And for those of you wondering, “But, where do they poop and pee?” the answer is, “everywhere” and “wherever they want to.” In all seriousness, it is recommended to bring a towel to class for either under your yoga mat or on top—and maybe even both—to keep your yoga mat relatively goat-poop-and-pee free. That said, I sprayed down my mat thoroughly after class nonetheless.

In addition to all that I have said about the amazing benefits of goat yoga—warmth, sweetness, cuddles, cuteness, novelty, and the unexpected—goat yoga really brought the element of playfulness back into the practice. I have practiced yoga for over 20 years and taught for a handful of years as well, and I have found that sometimes the playfulness element of yoga can easily get lost with people getting serious, self-critical, judgmental and even competitive about the practice. With that being said, there was not a single drop of any of that in this class. All around me were happy, humble, and tender-hearted people, all with their attention on the sweet and cute goaties and all sharing in the joy that the baby goats brought while practicing yoga from an open-hearted place.