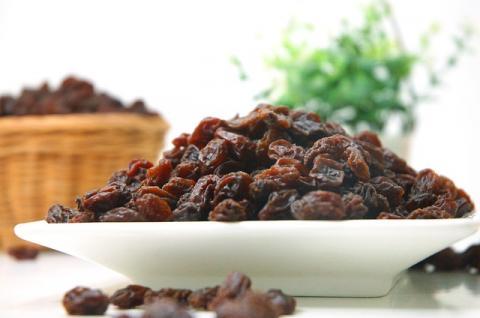 Vitis vinifera Linn, otherwise known as raisins, have been a common ingredient used in many Ayurveda dishes over the years. Many people specializing in Ayurveda practices encourage the mixing of healing foods, such as raisins, in with every day foods. Although I’ve always been aware that dried grapes were a nutritious food, it wasn’t until recently that I discovered more about their beneficial uses in Ayurveda practices. Of course, I couldn’t keep this discovery to myself. So, here I am to share with you the 7 amazing Ayurveda uses for Raisins.

Need to balance your Pitta or Vata doshas? Eat a few raisins! The sweetness or madhura in raisins is great for helping the Apana Vata. This sub-dosha involves areas of the kidneys, colon, rectum, and bladder. Raisins are known to be helpful and nurturing to these particular areas of the body. They are also said to assist and heal the Pitta dosha, as well as many of Pitta sub-doshas by protecting the skin from sun damage, aiding the Bhrajaka Pitta sub-dosha. Raisins strengthen the eyes (Alochaka Pitta), help sharpen the mind (Sadhaka Pitta), and improve or ease digestion (Pachaka Pitta).

Need a boost for your brain? Raisins are known to contain a high source of a vital trace-mineral known as Boron. This mineral is said to improve functions of the brain such as memory, concentration, focus, and coordination.

In Ayurveda, bringhana foods are foods that are supposed to support women who want to increase their fertility. Among these foods, raisins are often recommended to increase fertility. Want to know an interesting fact? They are mentioned as being used for fertility power in the biblical literature as well.

Raisins have often been used as a natural laxative to relieve constipation and encourage bowel movements. Since they are dried fruit, they contain a lot of fiber, which is good in helping support a healthy bowel movement. Because raisins maintain a healthy balance between beneficial and bad bacteria in the intestine, they can help keep the intestinal area healthy and running regularly. They can also help prevent over-loosening of stools by absorbing liquid in the intestinal tract.

If you’re looking for a quick source of energy to help end sudden fatigue, look no further. Due to their high amounts of carbohydrates, raisins are recommended as a healthy source of instant energy. They are known as an excellent source of vitamins and minerals such as Vitamin B, Calcium, Potassium and Iron as well.  There’s a reason raisins are in trail mix!

Did you know that 1 cup of raisins has about 1,236 mg of potassium? That’s awesome! Why? Because potassium causes the kidneys to excrete excess sodium in the body. Keeping your sodium levels low means helping to decrease high blood pressure.

Raisins are certainly a power food, but they should be eaten in moderation like most sweet foods because of their high glycemic index. It is also recommended to eat cinnamon with your raisins -- not just because it tastes good, but because it helps to lower the glycemic index. Another thing you should know is that because raisins are so sweet and weighty, they have been known to disrupt the Kapha dosha. This would be another good reason to not go overboard with consumption. It is also recommended to obtain raisins that do not have any added sugar and are not presoaked in sulfur.

For those of you who would like to include more raisins in your diet, try this Ayurveda Rice Pudding recipe. It’s delicious and raisins go perfectly with it! Although I personally can just take a hand full of raisins and just eat them as they are, it’s also fun to mix them in oatmeal, trail mix, and even salads.

Note: Raisins are highly toxic to dogs, so don’t share these goodies with your furry friends.