The Healing Power of Hands: Mudras of the Five Elements 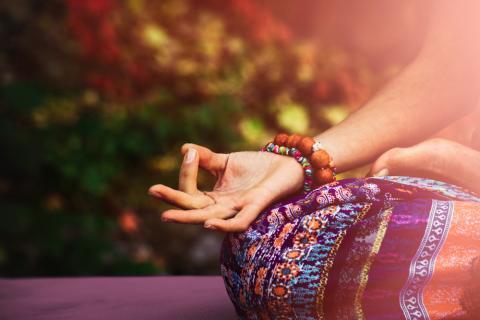 The word mudra is a Sanskrit word meaning a hand gesture that symbolizes something – and accordingly bestows joy and happiness. Mudras are considered so very important because it is said that our hands are full of our karmic energy, while our fingers are like plugs that help exchange energy between our pranic force (life energy) and the universal cosmic energy. Mudras, thus, can influence the pranic energy – further branching out into emotional, mental, physical and spiritual energies. By positioning our hands as dictated by the rishis of yore, we link our bodies to the cosmos – thereby easing pain, stimulating hormones and increasing our pranic vitality. Spread extensively across Hinduism and Buddhism, it is said that there are some 400 mudras already.

This article will cover 5 basic, elemental mudras to incorporate into your practice today!

The Symbolism of Earth: Prithvi Mudra

According to Ayurveda, the earth or prithvi element is a vital part of our skeleton, muscles and internal organs. And so, the prithvi mudra helps strengthen the body from the inside. Physiologically speaking, it boosts confidence, determination and also increases spirituality.

To practice this mudra, sit down cross-legged or in the lotus pose with your back straight. Touch the tip of your ring finger to the tip of your thumb, keeping the other fingers straight and extended. It is said that doing this mudra for 10 minutes three times a day can also eliminate any vitamin or mineral deficiencies as well as improve digestion.

The Symbolism of Fire: Surya Mudra

Quite simply, the fire element in Ayurveda is associated with metabolism as well as body temperature and regulation. Practiced in a seated posture on an empty stomach, the surya mudra is said to help one lose weight, reduce cholesterol and fats, boost metabolism and immunity, and regulate blood pressure and the thyroid.

The Symbolism of Water: Varuna Mudra

The largest element of the human body is water – so the varuna mudra works on this very component, the water –  aka the blood in the human body. Practicing this mudra is easy as it can be done in any position and at any time of the day for 10 minutes or so – it helps with better blood circulation, eliminates disorders of the blood and skin and also helps balance out the taste in your mouth as well as reduces body aches.

The Symbolism of Air: Vayu Mudra

If your Ayurvedic dosha is vata, then you have found the mudra to practice. The vayu mudra regulates bodily air and balances the air element within the body – it helps ease the symptoms and severity of the air element ailments such as gout, flatulence, arthritis, rheumatism, chest pains and cervical discomfort. It is also said to help with the excessive motor movements in neural diseases such as Parkinson’s.

This mudra can be practiced at any time of the day on a full or empty stomach in a seated pose with the back straight. Fold the index finger towards the base of the thumb, and fold the thumb over the finger so that the tip of the thumb touches the second phalanx of the index finger.

The Symbolism of Life: Prana Mudra

The prana mudra is said to activate the dormant pranic energy (chi or qi) in our body, thereby energizing our physical and metaphysical self. This mudra is also said to cleanse or detox our aura and help our pranic energy to fall more in line with the cosmos and in doing so, helps our life force to get cosmic energy from the universe.

To do this mudra, sit in padmasana (lotus position) and practice it for 10 minutes, at any time of the day, whenever you are feeling tired physically, mentally or emotionally. To do this bend the ring and the little finger, touching the tips of both to the tip of your thumb, keeping the other two fingers straight.

Five mudras, inspired and associated with the pancha tattva, the five elements of life. Try doing these for 15-20 days and you will notice a subtle yet gradual positivity about you. If you have any questions or feedback, do write in to us in the comments section below.