5 Spices to Improve Your Gut’s Health 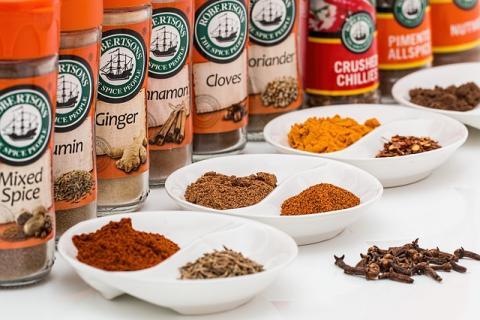 Heightened stress, demanding schedules, processed food, and greater sensitivities in today’s modern world have started to take their toll in even greater numbers. This shift can be witnessed by the increase of obesity and disease in our society. The National Health Institute of Diabetes and Kidney Diseases reported 60-70 million individuals a year in the United States are affected by some type of digestive illness. Fox News, in November 2013, reported a staggering 74% of Americans are living with digestive issues that range from gas, bloating, indigestion, and abdominal pain to diarrhea and constipation. Those are alarming figures and are attributed to a lifestyle that is constantly on-the-go, high in stress, with decreased attention on maintaining a proper diet and adequate exercise.

Why are digestive issues so prevalent today compared to the past?

It is so easy to shift our lives into auto-pilot, living one day like the next, without paying any attention to our overall health. That’s until something goes awry, and our health is compromised.

Often individuals are too embarrassed to talk about these issues, but as with most matters dealing with the human body, if left untreated the problem will get worse, causing other more severe repercussions. What if we actually took a proactive approach, curbing these numbers with simple changes to our diet that would ultimately reduce the mounting medical bills our society faces today? Rebooting our body’s natural ability to digest, regulating toxins, and strengthening our digestive system is not some prescription to be provided to you over-the-counter, but actual lifestyle changes easily implemented by opening up the spice cabinet and getting creative. Rather than seeking out some magic drug, reach for these five convenient spices that have been used in Ayurveda for thousands of years with guaranteed success.

Known for its cooling attributes, fennel is a seasoned warrior waging a battle on two fronts, both inside the body and out. Used to relieve cramping, nausea, and bloating, fennel also promotes lactation and clear, radiant skin.

Coriander, often found in leaves, is far more effective when consumed as a seed. Also referred to as cilantro, it is known in Ayurveda for its cooling tendencies, especially for pittas known to be fiery. Coriander prevents and relieves gas from intestines and can be consumed to help heart burn.

Cumin is identified by its strong taste and identifiable smell. Often used in Mexican cooking as well as oriental dishes, it is actually most effective when eaten on its own. The most powerful spice among this list, cumin is used to detoxify the intestinal tract and boost overall digestive strength.

As a member of the ginger family, cardamom is quite known for its heating properties. Writings in Aryurveda praise this spice for its ability to make foods more palatable in flavor and easier to digest. Cardamom is one of the main spices found in chai tea, a traditional beverage originating from India. Cardamom is distinguishable among the spices used in this black tea and is primarily used to neutralize the effects of the caffeine. Cardamom is also notable for reducing the acidity in foods. When cooked, its properties help to decrease the production of mucus, gas, and bloating in the stomach and small intestine.

Ginger is a widely prevalent, universal spice found fresh in root form or ground into a dried powder that’s pungent in taste and is more commonly known for its heating attributes in the upper intestinal tract. In contrast, its sweet aftertaste is quite cooling and used to soothe the lower digestion. Working with these two properties, ginger helps to create balance and increased nutrient assimilation.