Yoga For The “Weak” At Heart: 5 Simple Practices 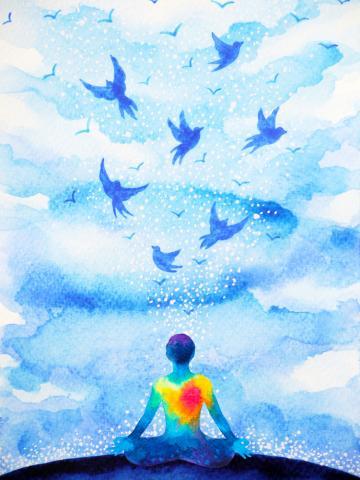 The heart beats 103,680 times per day on average and over 2 billion times in an average lifetime. How strong the heart is determines much about an individual’s physical and emotional health; these two elements inevitably influence the mental and spiritual health of a person as well. Practices such as those found in yoga can significantly strengthen the heart and bring greater resilience to every level of beingness, making the “weak of heart” into the “peak” of heart.

With roots in India, where some of the longest living humans reside, yoga has permeated the lifestyles of billions of people—lending not only bodily resilience, but spiritual expansiveness like few places on earth. It would not be uncommon, in any given town or village across India, to find someone of any age standing on their head, moving through sun-salutations, balancing on one foot, or sitting in a meditative stance. It is also regular fare to be welcomed into the home of any family, served a homemade cup of chai, and conversed with for hours, full of heart and care. The Indian people are anything but weak of heart, and yoga could easily be seen as the cause.

It takes a strong heart to deal with what life throws at you. The older one gets the less naive one becomes to the challenges that must be faced throughout a lifetime. From childhood to childbearing, relationships and businesses, deaths and money issues, it is no small feat to keep the body, mind, and spirit intact for such endeavors. With yoga as a constant companion, one may find the response to life's surprises mellowed, and the instinct to internalize problems, lessened. Such is the impact of the myriad centering practices yoga offers.

Though many think of yoga as a series of postures and funny body positions, the truth is, yoga is so much more. “Yoga,” the word, literally means “to yoke” or “to unify”—so any activity, mental attitude, or gesture, and any way of approaching life that allows one to find union within, could be considered yoga. Yoga teaches one a particular state of mind—one of equanimity, moderation, detachment, and heart. To devote one's life to seeing the unification between all things and within all things: this is yoga.

There are several simple yogic techniques that can assist the weak of heart—both physically and emotionally—to become strong, balanced, and healthy. Here are 5 of them:

1. Hridaya Mudra – also known as “gesture of the heart”

This is a powerful mudra. It not only helps to drop one into heart-centered living, but it also actually, physically improves and strengthens the heart. If one has heart problems or high blood pressure, they can surely benefit from regularly performing this simple yogic technique. Through regular practice, the heart is brought into coherence, and the person will begin to act more from a place of compassion and self-love. Utilizing this gesture helps to clear out the heart chakra and can also benefit those with frequent headaches or asthmatic conditions.

To perform this technique one simply closes off the ears by placing index fingers on the cartilage between cheeks and ears, and pressing it in. With eyes closed, make a strong humming sound and feel the vibration in the body.

The buzzing bee breath brings a feeling of bliss into the heart. It calms and harmonizes the body organs and provides a sense of peace and calm throughout. Bhramari also helps one to build confidence by strengthening the heart chakra and improves both memory and concentration in the long run. If one will practice Bhramari on a regular basis, for at least 1-2 minutes each session, that which could be considered “weakness of heart” (in any sense of the word) will be eliminated.

To perform the camel pose, while sitting upward on the knees, separate the knees apart to a comfortable position. Extend the chest forward while reaching arms back, grabbing for the back of the upper thighs with hands. Open up the heart space by breathing into the heart, gazing upward toward the sky. Hands may move either to the hips, to support a less intense version of the pose, or down onto the heels to really open up hips and heart.

This posture is a strong, solid heart-opener which should be approached with great care. There can be some deep emotional-release triggered by dropping into the deeper expression of this pose. By staying longer and breathing deep, while stretching the sternum to the ceiling, the heart chakra is encouraged to open and cleanse, and the physical heart is supported in circulating blood in a new way. The entire spine is compressed and the hips are open, bringing a sense of vulnerability to the body, which in turn leaves one feeling more confident, less vulnerable and less “weak.” How does it do this? The posture itself does the work that life might normally do in challenging such feelings as weakness, vulnerability, and shame to arise, allowing the practitioner to immediately move through them into the healthy, empowered expression.

Bhakti means devotion. To practice bhakti yoga is to find union within through devotional means, such as chanting and singing praises to the most high. There are many chants, mantras, and kirtans that can be used to practice bhakti; a few simple ones are as follows:

Yoga can also be approached strictly as a meditative technique for directly connecting with and strengthening the heart. By using either silence alone—observing the beating of the heart—or visualization of the heart being purified and strengthened, one can notice profound changes and an improvement in the state of the physical heart, emotional sensations, and spiritual connection to the heart-center.

One's visualization skills will improve over time, so it is recommended not to get discouraged if initial benefits and success are not noticed. It takes a bit of practice to develop strong visualization skills. It is known to science, however, that the brain knows no difference between actual physical practice and visualizing something. The benefits are the same. By using the power of yoga through meditation and visualization, weakness of heart can be greatly improved.

Yogic practices, as the ones mentioned above, are for assisting the weak of heart to overcome troubles and find strength in body, mind, spirit, and heart, on every level. Though yoga may seem daunting to many at first, as one can see, there are many simple techniques that can be incorporated into one's daily life for substantial change and remarkable improvement to health, without too much effort.

If you feel weak at heart, perhaps it is time to try some simple yoga to assist you today!