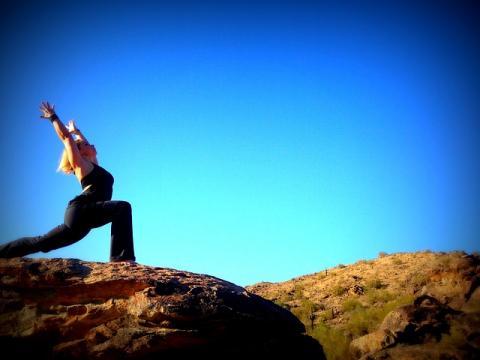 Below, we look at some of the benefits of practicing this set of poses, as well as the science behind those benefits

Life as we know it needs both water and oxygen to survive. And the reason or science behind our planet having an abundance of both lies with the star of our solar system – the Sun. In yoga, the sun salutation or the Surya Namaskar is, in effect, a prayer that thanks the sun for its generosity and all that it bestows. In ancient Hindu scriptures, the Surya Namaskar is a way to align the solar plexus (from where gut feelings arise) with the sun, since it is believed that the solar plexus is governed by the sun itself.

Whatever be your belief – ancient, scientific or modern – the set of 12 asanas that make up the Surya Namaskar are each beneficial in their own way and together make for an exercise for the body, mind and soul. And if the 12 beej or mool (seed) mantras of the Surya Namaskar are chanted alongside the physical movements, it makes for an even more powerful exercise because it then transcends to the spiritual plane.

The 12 asanas of Surya Namaskar

The Surya Namaskar should ideally be done in the morning, in a clean and green environment, as close to the sunrise as possible. If mornings are a problem, then you can perform this set of asanas in the evening, around sunset. Remember to do this on an empty stomach and with a clean bowel. You may choose to play music that’s calming to you – nature sounds, mantras or chants and yoga mixes. Remember to keep the abdomen pulled in and breathe in and out calmly, through the nose. Slow down if you get out of breath.

1.Pranamasana (prayer pose): Begin with a standing pose, feet slightly apart and with folded hands and a bowed head. Inhale & exhale calmly. The mantra: Om Mitraya Namaha – salutation to him who’s a friend to all.

2.Hastauttasana (standing backward bend): Start with a deep inhale and raise your hands above your head, bending your body backwards as far as it can comfortably go while pulling in the abdomen. The mantra: Om Ravaye Namaha – salutation to him who is a cause for change.

3.Padahastasana (standing forward bend): Exhaling, bend your body forward, extending your spine as you go lower. Touch your feet and then the floor with the palms of your hands, keeping your knees straight. Go as far as you can without bending the knees. The mantra: Om Suryaya Namah – salutation to him who induces activity.

4.Ashwasanchalasana: Inhaling, take your left leg backward touching your left foot and knee to the floor. Bend the right knee till your thigh is parallel to the floor and keep your upper body erect. All this time, your hands should retain contact with the floor – finally, look up as much as you can, exhaling and rolling your eyes upwards. If as a beginner you find this difficult, then do not touch the floor with your hands and bring them up to your bent knee instead. The mantra: Om Bhanave Namah – salutation to him who diffuses light.

5.Kumbhakasana (plank pose): Inhaling, take your right leg backwards and lower your hips and spine, keeping your hands rooted to the ground. Keep your body parallel to the ground as much as you can with your arms straight – divide your weight between your hands and toes – exhale and hold your breath. The mantra: Om Khagaye Namah – salutation to him who moves in the sky.

6.Ashtanga Namaskar (eight-limbed salutation): Inhaling, lower your knees to the ground and slowly bend your elbows, lowering your chest to the ground also. Exhale and hold while you make sure your abdomen does not touch the ground – your forehead, hands, chest, knees and toes should be in contact with the ground. The mantra: Om Pusneya Namah – salutation to him who nourishes all.

7.Bhujangasana (the cobra pose): Inhaling, move your weight forward, keeping your lower body from the pelvis to the toes flat on the ground. Straighten your arms and elevate your upper body but do not hunch your shoulders. Hold your breath. The mantra: Om Hiranyagarbhaya Namah – salutation to him who contains everything.

8.Parvatasana (the downward dog): Exhaling, raise your body from the hips and spine, moving your feet forward to lie flat on the ground. Your body needs to resemble a mountain peak with your hands and feet being the anchor points. The mantra: Om Marichaye Namah – salutation to him who possesses rays.

9.Ashwasanchalasana (the equestrian pose): Inhaling, come back to the equestrian pose. Move your left leg forward (the opposing leg from step 4), and keep the right leg back with the knee and toe touching the ground. Mirror the posture of step 4 on the exhale. The mantra: Om Adityaya Namah – salutation to him who is the first god, the god of gods.

10.Padahastasana (standing forward bend): Inhaling, straighten your right leg and bring it forward to meet the left leg, keeping yourself bent at the spine and touching the feet or the floor with knees absolutely straight. This is repeat posture of step 3 on the exhale. The mantra: Om Savitreh Namah – salutation to him who produces everything.

11.Hastauttasana (standing backward bend): Inhaling, extend your arms out and raise yourself from the spine upwards, bending back to reach the posture of step 2. The mantra: Om Aarkaya Namah – salutation to him who is worthy of worship.

12.Pranamasana: Exhaling, straighten your spine and bring your arms down in the Namaste pose of step 1. The mantra: Om Bhaskarayah Namah – salutation to him who is the cause and meaning of luster.

These are the 12 asanas of a Surya Namaskar, though some versions replace the plank pose, Kumbhakasana of step 5 with the Parvatasana (downward dog) of step 8. That said; either version is equally beneficial. If this 12 step asana is done 9 times, in totality you end up doing 108 asanas – a perfect beginning for advanced yoga poses, or a mini workout in itself.

The Benefits of a Surya Namaskar

The first and foremost benefit of a Surya Namaskar is that of exercise – no workout, done within body limitations, is a bad one. And science has proven that the sun salutation is a particularly salubrious exercise. Here are 12 benefits of a Surya Namaskar:

1.A great workout: A Surya Namaskar (i.e., the 12 asanas of it) can be done within 2-4 minutes – faster for a cardio workout and slower for a more yogic workout. This set of 12 asanas burns an incredible 13.90 calories for a person within average weight range. An overweight person will burn more calories.

2.A complete stretching of muscles and joints: From muscles to joints, the 12 asanas of the Surya Namaskar ensure that your body gets a thorough stretching, but only to the point that it can bear without injury. The stretching mentioned above works to make your joints supple and flexible, thus staving off joint problems and pains in the long run.

3.Higher energy levels:  Along with the usual benefits that exercising brings, sun salutation also regulates almost every hormone in your body – thereby improving bodily health. This in turn makes it an energizing and revitalizing exercise -- perfect for those suffering from chronic fatigue.

4.A diabetic controller: The asanas in a Surya Namaskar put pressure on the pancreas in a good way, thus stimulating it to maintain an optimum level of insulin – making this a good exercise for anyone who is pre-diabetic or diabetic.

5.For a healthier gut: Again, the various sequenced asanas of a Surya Namaskar activate your digestive tract to behave as healthily as it can, thus improving digestion and even eliminating chronic constipation and acidity.

6.Regulating the thyroid: You will notice that doing the Surya Namaskar makes your neck stretch too, taking away the tiredness in your cervical area and shoulders. This stretching of the neck also rejuvenates the thyroid gland, making it as active as is needed by the body, thereby helping in weight regulation.

7.Aids in mental acuity and balance: As with any exercise, the intensive asanas of a Surya Namaskar release feel good hormones in the body which in turn reduce cortisol, aka the stress hormone. The Surya Namaskar is great for people battling stress and even depression since it also regulates the sleep cycle.

8.Reduces belly fat: Since Surya Namaskar is an effective weight loss exercise, it reduces body fat and improves muscle tone. It is also effective in targeted belly fat loss as it stimulates many hormones of the body and makes for a good abdominal exercise, thus improving heart health and blood pressure as well as reducing risks of cancer – all of which are related to belly fat.

9.Improves blood circulation: The stretching and the compressing of various muscles and body parts improve the blood flow in the body, thereby eliminating blood disorders and circulatory problems.

10.For glowing skin & shiny tresses: The exercise hormones coupled with better blood circulation, along with hormone regulation, ensure your skin and hair get the best benefits ever and glow with health and vitality.

11.Detoxifies, from head to toe: When you do yoga, you will notice an automatic regulation of breathing – you may first need to read and remember the inhales and exhales during a Surya Namaskar but slowly, your body will automatically know when to do what. This aids in detoxifying your lungs in the best ever manner.

12.It makes you happy: Doing any exercise is a positive step. Doing yoga such as the Surya Namaskar is another step forward towards positivity as this is one time you can clear your head and concentrate on the magic of being and creation. As you do these asanas, you will notice an increased positivity, serenity and happiness about yourself.

To put it concisely, as long as you are cleared by your doctor to do exercise (there are contra-indications of starting Surya Namaskar if suffering from back problems, broken bones, dislocated joints and being pregnant); the Surya Namaskar is an ideal and flexible start towards fitness. Do only as much as your body can take without aches and pain. And soon you will be on your way to a healthier, fitter and happier you -- the sun salutation way…